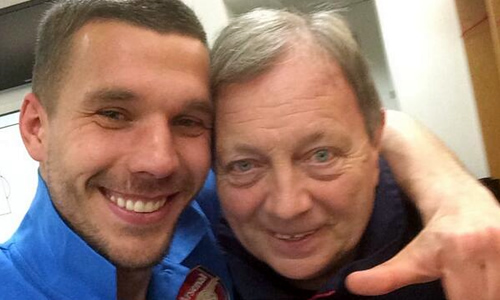 Olivier Giroud scored the only goal of the game in the 14th minute in north London after he rose highest to head home Santi Cazorla’s corner.

Sunday’s early Premier League kick-off prompted a flurry of activity on Twitter, and here are our favourite updates, in chronological order as usual.

Injured West Brom defender (@stevenreid12) is looking forward to the game: “Good luck to the boys today and travelling fans hopefully be safe at some stage this afterGary Lineker @GaryLineker

As a largely uninspiring game edges towards its conclusion, Gary Lineker (@GaryLineker) takes some time away from analysing the match: “Olivier Giroud’s hair parting is remarkably unscathed by 45 minutes football … Arteta leaves the field. Another with a splendid head of hair. They may generally finish 4th but Arsenal are top of the Barnet table.”

Arsenal playmaker Mesut Özil (@MesutOzil1088) pays tribute to the Emirates faithful: “Thanks to all gunners for the great atmosphere at the emirates this season.”

West Brom goalkeeper Ben Foster (@BenFoster) looks for the positives: “The lads worked so hard but just couldn’t get the breakthrough, turnout from the fans was top class. Gonna be glued to this Chelsea game now!”

Celebrity Arsenal fan Piers Morgan (@piersmorgan) is not content with his side’s position in the table: “Until the Arsenal management, and more Arsenal fans, see 4th as a failure, we’ll continue coming 4th. End. #afc”