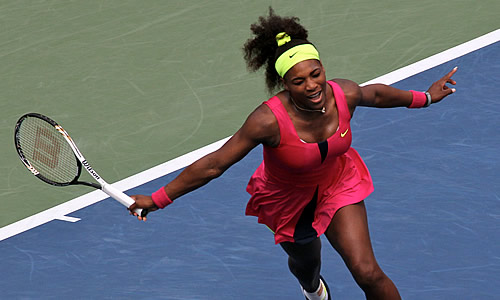 Beyond the Grand Slams, the pair of Premier tournaments that fill March are the biggest, most demanding but most rewarding events in the women’s calendar.

Indian Wells, surrounded by mountains in the hot, dry desert oasis in California, shows the way—with its $1m first prize and the mood of a peaceful, luxury retreat far from the madding crowds—though such is its beauty, kudos and quality that it draws huge numbers from far and wide.

In the blink of an eye, the whole tour is packed up for the move from North America’s Pacific borders to its Atlantic coast, to its bright, bubbly and extrovert cousin in Florida.

This one is very different: It is humid and low-lying, lush and green, rather than high, dry and golden. And then there is Miami, its beaches, its nightlife and its glamour right on the doorstep.

No wonder this place and this tournament are popular—and not only for the $720K purse for the winner. The Sony Open is hosted in the 30-acre Tennis Centre at Crandon Park in Key Biscayne, and it has many times won both WTA and ATP plaudits as Tournament of the Year.

This year, one of the most vibrant tournaments on the circuit—with a multicultural flavour, ebullient crowds, and a violet, purple and green oil-painting of a canvas—may also record a new chapter in its history. Serena Williams, playing for the first time since she became the oldest No1-ranked woman, at age 31, will be aiming for a sixth Miami title. Only one other has matched her five: Steffi Graf.

But the task is huge, a 32-seed draw that boasts every one of the top 32 women except one, an injured Sam Stosur.

Na Li is back for the first time since her great run at the Australian Open, where she injured her ankle in the final.

Two-time former champion Victoria Azarenka returns to competition after pulling out of her quarter-final match in Indian Wells, also with an ankle problem. She will look to match the unbeaten start that highlighted her 2012—a stunning four-tournament run that came to an end in the quarters here in Miami.

Also in the draw is Venus Williams, back to her highest ranking—18—since she was overtaken by illness during the summer of 2011. She was a champion three times in Miami more than a dozen years ago and has fallen into the eighth of defending champion, Agnieszka Radwanska.

Only two women have done the back-to-back Indian Wells-Miami double before. The first was Graf, in 1994 and 1996, and the second was Kim Clijsters in 2005. What are the chances of Sharapova winning the Miami title for the first time to join this illustrious company?

Miami has been a happy hunting-ground for the top seed who is looking to consolidate her lead over rivals Sharapova and Azarenka. Her only title so far this year was in the season opener in Brisbane, though she had a great run in Doha before losing in the final to Azarenka and pulling out of Dubai with back problems.

She is unlikely to be asked major questions in the first couple of rounds. She first faces fellow 31-year-old, Flavia Pennetta, down to 103 in the rankings. Next comes either her first seed Yanina Wickmayer or Ayumi Morita, who repeated her defeat of Briton Heather Watson in Miami 2011, despite Watson leading by a set and a break.

The fourth round poses Dominika Cibulkova or Lucie Safarova, neither of whom has beaten Williams. But the quarter-final match is more intriguing, a section that should bring together Indians Wells finalist Caroline Wozniacki and Australian Open finalist Li. The Chinese woman, ranked 5 and also aged 31, was in wonderful form before her fall and injury in Melbourne—she beat Julia Goerges, Radwanska and Sharapova and took the first set in the final.

If she brings that form to Miami, her reward may be a quarter match against Williams—but she hasn’t beaten the American since 2008 and has never reached the Florida semis in six previous attempts. It’s hard to see that changing.

Radwanska picked up perhaps her biggest title to date here last year but she is going to be sorely stretched to repeat that with the draw facing her.

She made a hot start to the season with two straight titles, the quarters of the Australian Open and the semis in Doha, but has won only three from five matches since.

She opens against Su-Wei Hsieh, who made her break into the top 30 last season with her first two titles.

Radwanska should meet Mona Barthel in the third round—a tall, talented woman also on the rise—up to 23 this week despite her No27 seeding. She has already beaten Angelique Kerber in Doha, Ana Ivanovic in Indian Wells and Marion Bartoli in Paris this year, and pushed Radwanska to a final set tie-breaker in their only previous meeting in Montreal last year.

That’s just the third round: The fourth is also tricky—a potential meet with former champion Venus Williams or with Sloane Stephens, who made such an impression in beating sister Serena to reach the Australian Open semis. And Stephens also took the No4 seed to a final set in their only previous meeting, last year in Cincinnati.

The bottom half of this quarter holds Marion Bartoli and Petra Kvitova—who are scheduled to meet in the fourth round, and shared the honours in their two matches in the US Open swing last year. Bartoli will first have to contend with German Andrea Petkovic, returning from long-term injury and an easy first-round winner.

The No8 seed Kvitova has struggled to find her best so far this year, despite winning in Dubai. But she did beat Radwanska in straight sets there, and holds a 4-1 advantage. So plenty of problems for the defending champion in Miami.

Sharapova’s victory over Wozniacki in the Indian Wells final took her past Azarenka to No2 in the rankings with her first title of the year, but it was too late to secure the No2 seeding this week.

The nature of her win was advanced warning of a woman meaning business, a near-faultless 6-2, 6-2 trouncing of the one of the best defenders and fittest women on the tour. Sharapova made 33 winners to Wozniacki’s two.

She also has a decent draw ahead of a possible semi meeting with the 2009 and 2011 champion Azarenka, and though Sharapova has never won in Miami, she is a three-time finalist.

The opener is straightforward, against the 129-ranked Eugenie Bouchard or a qualifier—one of three out of six players in this section. Her projected first seed is fellow blonde Russian, the 32-ranked Elena Vesnina, who won a career-first title in Hobart this year but is no match for Sharapova.

The fourth round promises a rerun of the Indian Wells semi against a further blonde Russian, Maria Kirilenko, who has pushed her compatriot hard before, though not last week. However, Kirilenko had beaten Radwanska and Kvitova in the previous two rounds in Indian Wells, so this time may be fresher.

Sharapova’s quarter-final opponent is slated to be No8 seed Sara Errani, another victim in Indian Wells. The petite Italian is not to be underestimated—it was this time last year that she began her surge up the rankings with her attractive all-court tennis, but she has a rough road in an eighth that could pose unseeded Daniela Hantuchova and Sabine Lisicki, Tamira Paszek, 2006 Miami champion Svetlana Kuznetsova, the fast-rising sister of Radwanska, Urszula, and No12 seed, Ivanovic

The biggest question mark over Azarenka’s chances is the state of her ankle. If she is fit, however, she should have a clear run through to the quarters.

She may face Madison Keys in her opener, if the American wild card beats a qualifier in the first round. The first seeded player for the Belarusian is the lowest in the draw, Alize Cornet, who could meet Briton Laura Robson in Round 2.

Robson has not won a match since reaching the third round at the Australian Open, where she beat Kvitova, losing in the first round of all three subsequent tournaments. She has not played Cornet before and has not played the main draw in Miami either, so she could turn her fortunes round—assuming she beats No85 Camila Giorgi in the first round—at least until an Azarenka third round.

The top players in the other eighth are No15 Roberta Vinci and No20 Carla Suarez Navarro, both of whom have yet to beat Azarenka.

When it comes to the quarters, there is a less clear candidate. The No6 seed is Angelique Kerber, who reached the semis in Indian Wells. But she could play Francesca Schiavone in her first match, Sorana Cirstea next and then either 2008 runner-up Jelena Jankovic and 11th seed Nadia Petrova.

Kerber has never before faced the formidable Russian, who lives in Miami, and although Petrova is still to build a head of steam this season, she ended 2012 very strongly, winning in both Tokyo and Sofia.

Even is Kerber maintains her good form, though, she has not yet managed to beat Azarenka, though their last match in Istanbul was a battle royale.