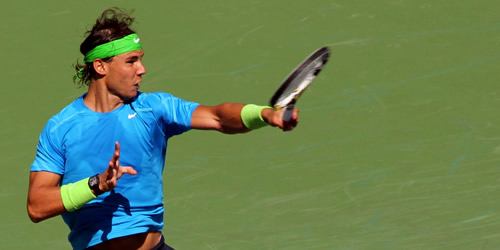 Rafael Nadal has withdrawn from the Miami Masters with a knee injury Photo: Marianne Bevis

With just an hour and half to go before he was scheduled to play Andy Murray in one of the most anticipated matches of the Miami Masters, Rafael Nadal announced his withdrawal from the tournament.

Murray and Nadal were due on court at 8pm BST, but at 6.30, Nadal said on Twitter: “So sorry for my fans, those here at Miami and those around the world. My knee won’t let me play today.”

Nadal was hoping to become the first Spanish man to win the Sony Ericsson Open, one of the biggest events on the tennis calendar and a tournament that he has never won despite reaching the final three times.

As well as runner-up trophies in 2005 and 2008, he lost last year to Novak Djokovic, who will play Juan Mónaco later tonight for the chance to defend his title.

Nadal needed treatment to his left knee earlier this week during a fourth-round match and admitted in the press conference after his quarter-final win over Jo-Wilfried Tsonga:

“I have problems on my left knee. That’s the thing. I’m not feeling great. I don’t know what’s gonna happen in the next match because gonna be a big match against one of the toughest opponents on tour, and probably I don’t arrive in my perfect conditions to that match.”

It would appear to be a recurrence of the tendinitis that has troubled Nadal before, but he assured the media in Spanish:

“It is nothing other than what I had before, but the tendons are much better than three years ago. Treatment works.”

It is only the second time in 777 matches that Nadal has given his opponent a walkover: The first time was eight years ago in Estoril.

While he and his supporters will be disappointed to fall short of last year’s Miami result, and the chance to win his first title since the 2011 French Open, there is no indication that Nadal will be anything other than fully fit to begin his clay campaign at the Monte Carlo Masters in just over two weeks’ time.

He is defending champion in Monaco and also at his next stop on tour a week later, Barcelona.

Murray, who won the Miami title in 2009 against Djokovic, is hoping to claim his second title of the year: He won Brisbane before losing to Djokovic in an epic five-set semi-final at the Australian Open.

Murray went on to reach the final in Dubai before losing in the second-round in Indian Wells.

He has lost only one set, to Janko Tipsarevic, on his way to what would have been a 19th meeting with Nadal and their sixth in under 12 months. The last time they met was on the hard courts of Tokyo, where Murray beat Nadal in the final, one of three straight trophies he took in the Asian swing.

Friday’s walkover is his second of the tournament after Milos Raonic pulled out of their third-round meeting with an ankle injury.

The men’s final, between Murray and either Djokovic or Mónaco, is scheduled for the late UK afternoon this Sunday.