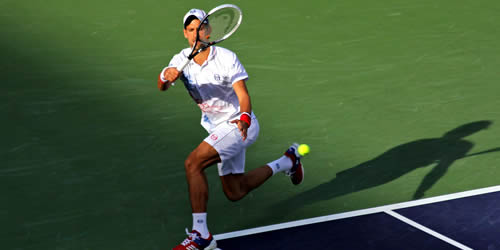 Ten days can be very long time in tennis. The final of the Sony Ericsson Open in Miami came down to the very men that many, including this site, predicted. But the twists and turns in the paths of Andy Murray and Novak Djokovic towards Crandon Park’s Centre Court were far from expected.

Who would have thought that Roger Federer, fresh from three back-to-back titles, would succumb to the man he had beaten in all but two of their 23 meetings?

Yet Andy Roddick, at his lowest ranking in almost 11 years and barely making the seedings—he was No31—played a storm, swept Federer from Djokovic’s half of the draw, and headed towards what looked like an all-American quarter-final against friend and rival Mardy Fish.

Who would have expected, instead, to see the No21 seed, Juan Monaco, traditionally a winner on clay rather than hard courts, take out Roddick and then, on his 28th birthday, beat Fish to reach only his second Masters semi-final?

Nor would many have expected the promising but unpredictable talent of Grigor Dimitrov to beat Tomas Berdych in the third round, nor for Janko Tipsarevic to continue to shine, in his late 20s, and beat not only Dimitrov but also David Nalbandian and Alexandr Dolgopolov before almost beating Murray too—he was a set and a break up in their quarter-final.

It’s rare for a player to reach the final of a 96-man draw on the back of just three wins, but that was the unexpected run of Murray. First he received a walkover from Milos Raonic with an ankle injury and then he leap-frogged to the final courtesy of a withdrawal by Rafael Nadal with a knee injury.

It meant, then, that the two men who had the greatest say in who may or may not feature in the Miami final failed even to show up: Federer and Nadal would not face Djokovic and Murray.

But despite the loss of the other two top-four players in the semi-finals, the championship match promised intrigue, drama and high quality. For despite Djokovic’s Grand Slam successes and his stride to the top of tennis last year, Murray had enjoyed more success than many against the friend and rival born just days after himself. In fact, Murray was the only one to have beaten the Serb twice since he became No1—in Cincinnati last year and in Dubai last month. And there was more.

Djokovic may have lead Murray 7-5 in their head-to-heads, but Murray had won five of the last eight, and all of those were on outdoor hard courts in best-of-three matches—including the last time they played the Miami final in 2009.

One thing was certain, though. Murray had to come out on the offensive, force the pace, and try to break the Djokovic.

Djokovic opened, as he would continue for most of the match, with a comfortable hold of serve. By the fourth game, they had settled into what became the metronomic pattern of the match: corner-to-corner jousting of deep, angled, clean ball-strikes.

Murray looked comfortable as he went to 40-0 on serve in the fourth game, but Djokovic pulled him back to deuce with his superior cross-court angles.

Murray worked through four deuces as the game clicked past 10 minutes—a brutal opening in the high afternoon heat and humidity. And Djokovic’s tennis was equally brutal, powering first to the forehand, then switching to the backhand, before another disguised change of direction to the opposite corner: perfectly executed and uncontainable. Murray was broken on the second break point to go 3-1 down.

With Djokovic seeming the more affected by the conditions, Murray struck straight back—almost—to earn a break point, but Djokovic snuffed out the chance with a short, sharp serve and volley finish and held, 4-1.

In the sixth, it was the same story. Murray did little wrong from the baseline, but Djokovic held the reins, won two more break points and broke again. As if to rub salt into the wound, Djokovic served out the set with his first ace, 6-1.

On paper, there was little between them. Both had made 13 unforced errors, and Djokovic managed nine winners to Murray’s six. But on serve, there was clear water. Djokovic found 70 per cent of his first serves against Murray’s 55. More importantly, the Serb was scoring 88 per cent of points on Murray’s second serve.

On that at least, Murray upped his performance in the second set. However, Djokovic missed barely a beat in his rhythm and, unless he sank under the heat and humidity—and he looked, between points, completely drained­—there seemed little Murray could do.

The Scot played effectively enough from the baseline, and held his own through numerous long, arduous rallies but, more often than not, was eventually outplayed. Yet Murray came to the net hardly at all and played perhaps two drop-shots in the match. With his serve under-performing, he was always running to keep up.

Murray was pushed to deuce on his opening serve, survived break points on the second, and another on his third. He held on by his fingernails as Djokovic seemed to track every ball as though by radar.

Finally, Murray pushed Djokovic to deuce in the Serb’s fourth service game, but that was as close as he came to breaking: He did not earn a single break point in the set.

So as Murray survived yet another break point before heading to a tie-break, the outcome looked inevitable. As they changed ends mid-game, Djokovic already held the mini-break, 4-2, served an ace, and then held his final two serves of the match. And it felt like the right and proper outcome, a straight sets victory.

Murray was always in the rallies but almost always doing the chasing and, in the end, something had to give—and it was the Scot.

Djokovic became only the third man to win this prestigious Miami title three times and one of the rare men to do so in back-to-back years.

It is 30th title on his resume, and his 11th Masters—equally Pete Sampras. The win also means that, having defended his 1,000 points, Djokovic will increase his lead at the top of the rankings because both Nadal and Federer fell short of their 2011 results.

All of them now move to the red-stuff, where Nadal and Djokovic shared the big prizes last year: the former in Monte Carlo and Paris, the latter in Madrid and Rome. And at the moment, it is hard to see anyone else breaking that clay duopoly.