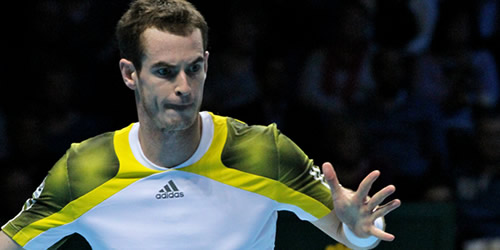 Andy Murray is through to the fourth round in Miami Photo: Marianne Bevis

After taking on the youngest man in the top 100, Bernard Tomic, in his first match, it was now Andy Murray’s turn to take on the third youngest, and the youngest seed in Miami.

The 21-year-old Grigor Dimitrov has promised great things from the moment he won both the Wimbledon and US Open junior titles in 2008—but his has been a slow burn.

The tall, dark and handsome man from Bulgaria has worn so many talents on his sleeve that it often seemed he had trouble marshalling them into a complete game. Indeed it seemed to take him until last year also to grow physical into his slender, long-limbed body, but then it all began to gel.

A first semi-final on his favourite surface, grass, at Queen’s Club, then another in Gstaad, a clutch of wins over higher-ranked players in Basel and Paris and eventually the next step up, his first final in Brisbane in January.

There were still disappointments—a first-round loss at the Australian Open this year, for example—but the performances grew more consistent and the seedings followed, first in Indian Wells and now in Miami.

From just outside the top 100 at the end of 2010, Dimitrov climbed to 76 by the close of 2011, and broke the top 50 by the end of last year. And despite a natural flair for grass, he showed some prowess on the Miami hard courts last year, reaching the fourth round in only his second visit—but that also marked his only win to date against a top-10 player, Tomas Berdych.

This year, he had another chance, but the task was a big one: former Miami champion and No2 seed, Andy Murray, the man who beat him in that Brisbane final.

In fact, it had taken high-ranked men, the eventual champions, to stop him since Australia, too: Juan Martin del Potro in Rotterdam and Novak Djokovic in Indian Wells. If Dimitrov could win his first set tie-break against Murray instead of losing it, as he did to Murray in Brisbane and to Djokovic a fortnight ago, perhaps he could cause the biggest upset in the Everglades so far.

Dimitrov certainly started as though that was the plan. He showed the full range of his skills and offensive style with some whipped cross-court forehands, a couple of glorious exchanges with Murray at the net and—his stand-out stroke—a single-handed backhand that almost defies mechanics so far back does he fold his right arm.

And just as in his early stages against Tomic, Murray took a while to settle into his rhythm and range. But where he resisted early break points against the Australian and went on to sweep him aside in 56 minutes, this was a different prospect.

Dimitrov did break to lead 3-1 and despite Murray hitting back with an impressive return game in the next, the Bulgarian was in full flow and surged to a shock lead with some creative sliced returns, a drop here, a lunging volley there, to break for a 4-2 lead.

Such was the variety, the skill and rallies between the two that the commentators themselves could barely contain their enthusiasm: “Flair, creativity, shot-making and a fair amount of will-power” was their description as Dimitrov took a 5-2 lead.

The Bulgarian went on to hold set point when Murray served a double fault, and then another. But Murray is not a Grand Slam and Olympic champion by chance. Few players would have chased down the near-perfect lob that Dimitrov hoisted above him, but Murray both returned it and followed up with a passing winner.

It was a vital point, and Murray went on to hold and carried his momentum into the ninth game. He broke, defending his baseline as well as anyone in the game, but was helped by a nervous Dimitrov who served three double faults.

Here was a serious case of dejà vu—the Bulgarian had made four double faults when serving for the first set against Djokovic in Indian Wells. And like then, it resolved instead in a tie-break that would go to the higher seed.

Murray, then, led by a set and the Bulgarian’s form, exposed by the consistent and solid shot-making of his experienced opponent, struggled to recover.

Unlike Tomic when faced with the returning machine that is Murray, Dimitrov certainly didn’t go away. He maintained his offensive tactics, ran and scurried, made some glorious winners but also a growing number of errors.

The crowd urged him on, and he tried to respond, but Murray broke his first service game for a 3-0 lead. Dimitrov held off more break points in the sixth, but Murray maintained his lead to the match’s conclusion, 6-3.

The Briton certainly knew he’d been in a fight against an increasingly dangerous player—this two-setter took twice as long as the one against Tomic. But although Dimitrov continues to improve, is stronger than a year ago, crafts his rallies with skill and has both touch and firepower, when it comes to the big moments against the big players, he still lacks the deep-seated confidence that Murray now exudes. The young star will learn it though experience but, for now, that top-10 glass ceiling remains in place.

Murray goes on to play No16 seed Andreas Seppi for a quarterfinal place, a man who has beaten him just once, back in 2006. Seppi survived a tough three-setter against Thomaz Bellucci in over two hours, on top of a 2hour 38min victory in his first match. It’s hard, against that background, to see Murray fail to progress.

In the other section of Murray’s quarter, Jo-Wilfried Tsonga took out Jarkko Nieminen in just over an hour, 6-3, 6-3, and remains on course for a quarterfinal meeting with the Briton.

Elsewhere, No8 seed Richard Gasquet won the battle of the single-handed backhands against No28 Mikhail Youzhny to meet yet another single-handed exponent, the No10 seed Nicolas Almagro.

The next highest seed in Murray’s half, Tomas Berdych, had real problems against the world No60 Alejandro Falla, suffering two breaks in the opening set to go 6-2 down, and then looking down the barrel of the gun in the second at 3-5, before breaking back and going on to take the tie-break.

For the second straight match, the No4 seed would require a deciding set, knowing that Sam Querrey awaited the winner in the fourth round after Milos Raonic handed him walk-over.