Miami Masters 2013: British No1 Andy Murray sweeps past Bernard Tomic in straight sets to book his place in the third round 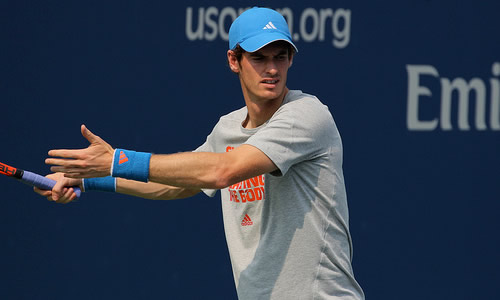 The No2 seed, Andy Murray, playing on the closest thing to home soil outside his homeland, is also in line to become No2 in the rankings if things go well in the Florida Keys.

And there is every reason to believe they will go well on courts where he thrives and in a place where he has enjoyed considerable success.

Murray won here in 2009 and was the losing finalist to Novak Djokovic last year. He also beat his first opponent in the 2013 Sony Open Tennis Masters, Bernard Tomic, in their only previous match, just over a year ago in Brisbane. This year, Tomic played Sydney instead, and while Murray went on to win the Brisbane title, Tomic took his first ATP title down the coast in New South Wales.

A main-tour title was a step that most followers of tennis believed to be inevitable from the 20-year-old who has already promised much, not least in reaching the quarter-finals of Wimbledon in 2011.

The young Australian is prone to blowing hot and cold, as reflected in his rise into the top 30 less than a year ago and his slide back to 64 at the start of this year. But his strong start in Sydney and a couple of decent wins over Martin Klizan and Tomaz Bellucci since then saw him climb back to 45 and the chance of a rematch with Murray in the second round.

The conditions were hot and humid, and some awkward wind swirled around the Technicolor Centre Court. But with fans fluttering amongst the fans, things looked good for Tomic in the opening games. He held serve to love, and then with a 2-1 lead, pressed Murray to 0-40. It took the Briton no less than eight and a half minutes to resist several deuces and hold.

Both men were drenched in sweat but the long service game had worked Murray into his metronomic rhythm and his great defensive skills also began to kick in. Tomic, frustrated at his lack of a breakthrough, let his own defences down, missed all his first serves and missed the lines with every strike of Murray’s returns. He was broken to love and quickly took on the look of ‘hopeless cause’.

Murray played solid tennis, made few errors, and put in a decent percentage of first serves, but it was far from outstanding. Yet Tomic showed little attack, even less defence and depressed body language. He held his next serve but that was it: Murray served the set out, 6-3, in 33 minutes.

The Tomic error count was at 20 to Murray’s total of seven, and it climbed fast in the second set as the Australian looked entirely unable to respond. Indeed he appeared to all but give up the fight, particularly after his first service game. He led 40-0, saw Murray easily close to deuce and earn a break point, but managed to hold. However, that would be his last game of the match.

In the fourth, a dire smash followed by two double faults from Tomic handed Murray the first break and then another break in the sixth began to draw jeers from a crowd that wanted to see a little more resistance. But it didn’t come and the match raced to its conclusion in 23 minutes, 6-1.

The Tomic statistics looked sad: 37 errors to 14 winners. He sounded sad in press afterwards, too, where he admitted to feeling below par since the previous day, giving him breathing problems during the match. It explained a lot.

Meanwhile the crowds across on Court 3 were similarly disappointed, though not by lack of effort on the part of Simone Bolelli. The Italian, having won a long three-setter in his opener, was forced to retire with a wrist injury—yet another loss in a growing string of retirements in the first days of the tournament. But it took No29 Grigor Dimitrov through, 6-4, 1-1, to meet Murray in the next round.

By coincidence, Murray beat this other young rising star on the men’s tour in the final of Brisbane this year—and he will hope it is as competitive a match this time, too, if only to get his competitive juices flowing before the bigger matches ahead.

The popular Bulgarian lost 7-6, 6-4 in that last meeting, and came close to taking the first set from Djokovic in Indian Wells last week. Miami will hope for—and expect—greater resilience from this young man than they got from Tomic.

The third of big young guns playing in this quarter on this hot afternoon was No21 seed Jerzy Janowicz and he came unstuck against the South American Thomaz Bellucci and a vociferous crowd on Court 1. There is a huge Brazilian presence in Miami and they certainly gave the Polish player, who is fiery at the best of times, plenty to get upset about, but he lost 6-3 in the third set.

However at the top of Murray’s quarter, Jo-Wilfried Tsonga produced some lovely moments, especially when he ventured to the net, to beat Viktor Troicki, but he will not play his expected seed. Instead, he meets the veteran Jarkko Nieminen, who has been enjoying something of a surge this season. After beating David Nalbandian in a cracker of an opening match this week, he took out the No27 seed Klizan for the loss of just four games.

John Isner came close to falling to Ivan Dodig in a see-sawing match. The Croat took the first set, 6-4, Isner the second, 7-5, and the American led 4-2 in the third before Dodig levelled to take it to a tie-break. Even then, it was nip-and-tuck, Isner discovering the advantage of coming to the net more often: He survived, seven points to five.

In the other quarter of the bottom half of the draw, there was straightforward progress for No8 seed Richard Gasquet and No10 seed Nicolas Almagro, and three-set victories for No17 seed Sam Querrey and No28 Mikhail Youzhny. No18 seed Philipp Kohlschreiber, however, lost out to one more young talent, David Goffin, in three sets.