Miami Masters 2013: Thirtysomethings David Ferrer and Tommy Haas both continue to shine through their own Indian summers 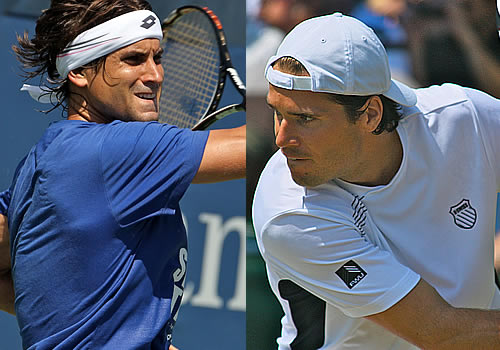 David Ferrer, 30, and Tommy Haas, 34, are both in action in Miami Photo: Marianne Bevis

Some players have a knack of lighting up a tennis court, an ability to draw the crowds like a magnet, the kind of appeal that simply lifts the spirit of those who watch.

Two such men, both shining through their own Indian summers, were in action on a sunny, blustery, sweat-inducing afternoon in the bright and breezy Florida Keys, home to the Sony Tennis Open on the outskirts of the Miami.

The first of them was David Ferrer, the dogged, bustling Spaniard lately returned to No5 in the rankings.

Ferrer found himself ranked No4 at the start of this year for the first time since 2008, the result of one the finest phases of his 13 years on the pro tennis tour. At the very end of 2012, he won his first ever Masters title—one of a scant half dozen or so outside the top four to have achieved that special accolade.

The 30-year-old from Valencia, though, has been one of the most respected players on the tour since he first peaked to reach the Masters Cup final in 2007. In 2008, he won his first grass title, and in 2010 and 2011, having contemplated retirement when his ranking slipped outside the top 20, he reached the finals of three Masters. He surged back into the top 10, ending 2010 at No7 and 2011 at No5.

Still he looked to improve, working on his tennis at the front of the court, developing a bigger serve and becoming possibly the fittest man on a court. His reward in 2012 was not just the Paris Masters title but six other trophies and a tour-leading 76 match-wins.

But dedication and hard work—and the success that followed—only scratch the surface of the Ferrer popularity. Inside the compact, head-down, no-nonsense package seems to beat the biggest heart in tennis—and the reason he inspires fellow players and fans alike.

Even after his energy-sapping 2012 season, Ferrer spearheaded the Spanish cause on the indoor hard courts of the Czech Republic, winning both his rubbers in straight sets. And there is no sign of slacking as he approaches his 31st birthday.

Despite the return of his nemesis, compatriot Nadal, into that No4 ranking, Ferrer’s dedication seems undimmed. Coming into Miami, he already has the most match wins on the tour, 21 of them. He reached the semis at the Australian Open and is one of the few players to own two 2013 titles. No wonder his tennis is so compelling, his fans so constant.

After a walk-over in his first match this week, his third-round encounter against No32 seed Fabio Fognini could have proved tricky with so little preparation on these courts. However, it proved to be no problem at all, a 6-1, 7-5 win in just 79 minutes.

For a place in the quarter-finals, he will have to beat No13 seed Kei Nishikori—which he did in straight sets at this year’s Australian Open. Indeed it’s hard to see anyone preventing Ferrer from reaching the semis now that no other seeds remain in his quarter.

For this is a fascinating section of the draw. Ferrer was one of four men out the eight competing for fourth-round places who are aged 30 plus, with the Spaniard the youngest of the quartet.

Xavier Malisse—who lost out to Nishikori—is 32. Austrian Jurgen Melzer is 31 and took on German Tobias Kamke. The oldest of the group is James Blake who, like Ferrer, has a career-high No4 ranking behind him. At 33, and with injuries aplenty over the years, he has fought back inside the top 100 from the nether reaches of 265 a year ago. He faces Albert Ramos for the chance of an all-veteran fourth-round meeting and, beyond that perhaps, an all-veteran quarter-final against Ferrer.

The second man to suck in the crowds from across Crandon Park is the oldest seed in Miami, the oldest left in the draw, and one of the oldest men in the top 100. At 34, Tommy Haas has been around the circuit more times than most, and that experience proved to be more than a match for the younger, less focused, more wayward talent of the No19 seed Alexandr Dolgopolov. But his longevity is just one of Haas’s attractions.

He is a handsome man, a fluid mover, plays varied and offensive tennis, and has one of the most admired single-handed backhands in tennis, but those qualities do not explain his broad appeal.

For Haas has overcome more adversity than most since he hit the heights of No2 in the rankings more than a decade ago.

After winning his first title in 1999 and then a Masters title in 2001, he faced injury and surgery countless times. It started with a broken ankle, then a second broken ankle followed by back trouble—and shoulder surgery dragged him outside the rankings altogether. Along the way there was even an accident that almost claimed the lives of his parents.

2004 brought his first comeback, a surge to No17 and the ATP Comeback Player of the Year Award. But then came a twisted ankle, a wrist injury and another shoulder problem—and a long slide in the rankings. After another comeback and his first title in two years in 2009, he was hit by right hip surgery and, a month later, right elbow surgery.

But this resilient man fought his way back to fitness once again last year, went from 169 to his current No18, and earned another ATP Comeback award along the way.

2013 shows little let-up in the Haas desire to play, either. He reached the final in San Jose and the semis in Delray Beach, and here in Miami has enjoyed one of his best wins of the season so far in beating Dolgopolov in 77 minutes, 6-3, 6-2.

He did it in some style, too, breaking back from a 2-0 first-set deficit to take eight of the next nine games.

Despite the wind, he pulled off drop-shots, sliced backhands, and one lob that drew a spirited chase from his opponent to no avail. Haas dominated from the back and the front of the court in equal measure, attacking the net 21 times, firing 21 winners and serving 13 aces.

It was, then, tennis to draw a packed crowd to the Grandstand Court, but the fans were also there to enjoy the back story of a player for whom age and injury seem to have been nothing but incentives:

“I would like to go out on my own terms. I’ve had some injuries, recently my hip, I didn’t even know if I was going to come back. Had a lot of lower back problems, some multiple knee problems, even a year ago. But since last year, I’ve been healthy and been able to get back into shape and play some good tennis again. When you win a title against Roger Federer in front of a German crowd, you try to see if you can do that one more time somewhere. That’s my goal.”

But then he played his trump card, for Haas now has one more incentive to keep him working and enthused:

“I have a two-year-old daughter and I would love her to see me play. This is like a dream already: She was sitting on the side here seeing me play.”

And with that, he lifted her in his arms, and the two waved into the camera.

Haas now faces Novak Djokovic—an easy winner over the weak resistance of Somdev Devvarman—for a place in the quarters, while Gilles Simon and Janko Tipsarevic complete the other fourth-round face-off in this half of the draw.

For Haas, it is a big ask to go any further, but one thing is in no doubt: He will enjoy every remaining match he can squeeze out of this eventful career.