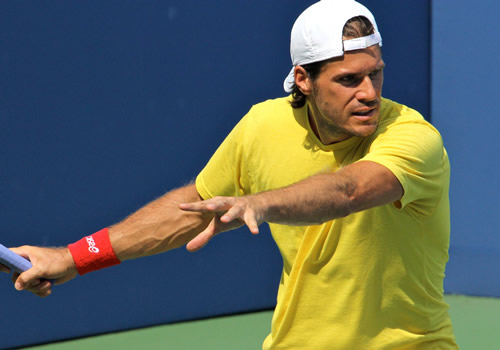 There were all kinds of things that marked out the fourth round of the Sony Open Tennis Masters in Miami.

An impressive 13 of the top 16 seeds had survived, with an equally impressive seven of them currently ranked in the world’s top 10.

The leader of the pack, Novak Djokovic was still on course to win a third consecutive title, his fourth overall, and he aimed to reach his 15 straight win in Miami by beating the No15 seed.

The second man, No2 Andy Murray—also a former champion, and runner-up last year—was still on course to become the overall world No2: He would overtake Roger Federer by taking this year’s title.

Three of the 16 were over 30 years old and, by the end of the day, all three would still be standing. One of them, David Ferrer, was playing here for the 11th straight year and had reached the fourth round for the eighth time.

The only two unseeded players among the 16, Jurgen Melzer and Albert Ramos, played each other, with 31-year-old Melzer reaching his first Masters quarter-final in two years.

Among the 16, there was only one non-European, Sam Querrey, and he was quickly excised, 6-1, 6-1, in just 51 minutes, to set up the first all-Europe quarter-final line-up in the tournament’s history, and the first in which no American played a part.

No8 seed Richard Gasquet, one of three Frenchman in the 16, would take a gruelling two hours and 39 minutes to reach the Miami quarters for the first time in eight attempts, and it kept alive his hopes of a Masters title after three runner-finishes.

But there was one statistic, buried amongst all the others, that looked set to change by the night’s end. In the list of Masters match winners, two of the 16 were tied fourth amongst all active players: Andy Murray and Tommy Haas both had 128. The odds suggested that Murray would pull ahead after their fourth-round matches.

Certainly Murray, the first of the two to play, made no mistakes in extending his number to 129. He played No16 seed Andreas Seppi, and sailed through, in perhaps his best performance of the tournament thus far, in 86 minutes, 6-2, 6-4.

He won 28 of his 31 first serve points to break the Italian three times, and set up a quarter-final against Marin Cilic, who took out the next highest seed in this quarter, Jo-Wilfried Tsonga.

However, the challenge facing the 34-year-old Haas, the oldest man of the 16 and the oldest seed in Miami, was far more daunting. He faced Djokovic, who had beaten him four out of six times, and in all of their hard-court meetings. And Haas, world No2 11 years ago, had only ever beaten a No1 player once in his long career—Andre Agassi in 1999.

But the popular German, 2012’s Comeback Player of the Year for the second time in his injury-blighted life, was showing in Miami just how fit and motivated he was after his latest comeback—rising from169 to No18 in the last 12 months.

This year, he had already reached the final in San Jose and the semis in Delray Beach, and in Miami had posted one of his best wins of the season in beating Alexandr Dolgopolov in 77 minutes, 6-3, 6-2. Even so, this looked like the end of his Miami road.

The commentary team summed up the Haas task: “He has to excel in all parts of his game. Win some free points on serve, hit some big forehands, use the backhand for some good variety…” Perhaps he was listening, for that is just what Haas did.

Showing no sign of intimidation, he brought his attractive blend of power, slice, angle and fluid movement into play from the outset, taking his two opening service games to love, adjusting to the breezy, cool conditions the better of the two.

Djokovic, indeed, seemed distracted by the wind, the crowd and the speed with which Haas stepped in to return his serve. One such return forced an error in the fifth game for a break, and the German went on a tear of five more games to take not just the first set, 6-2, but to lead the second, 2-0.

Haas had dropped just three points on serve in that opening set. Djokovic tried a net rush only to be passed by Haas’s elegant down-the-line backhand. Then the Serb saw Haas ghost in on his own serve for an angled volley winner. That was followed by a thrilling net exchange, and next a forehand winner past the net-based Djokovic.

The boisterous crowd was delighted by their late-night entertainment, a glorious mix of attacking and defensive skills. But when Djokovic won his first game in eight, a pivotal 11-minute game in which he fended off three more break points, they expected, perhaps, a feisty come-back from the defending champion.

He seemed to find some rhythm and some depth on his ground strokes to keep Haas at bay, and cut down his error rate—by this stage up to 20 compared with three winners. He was rewarded with a loose service game from Haas and broke to love to level the score at 3-3.

Djokovic, the 14-1 favourite before the match began, held serve to love, too, outplaying Haas at his own game with a mix of speed, spin and some strong net finishing.

Haas found the solution though: a switch to a purple shirt that blended with the deep purple court—and his purple patch returned.

He sliced and diced with Djokovic, worked a break point and once more took his chance at the net with a backhand volley winner. He finished as he had started, with bold and intelligent tactics, to serve out a famous win, 6-4.

No wonder the German was happy with his night’s work:

“These are the moments I appreciate the most, going on those big stages, playing against the best people in the world…Playing against someone like Novak and coming out on top at this time of my career, it’s unbelievable. It goes up as one of [the] best wins of my career. I’m just really happy and proud of that tonight.”

It made Haas, amongst all those other age-related milestones, the oldest player in 30 years to beat the No1 ranked player, and it kept him alongside Murray on that list of Masters match wins.

Like Murray, too, he has a good chance of making it 130 wins when he takes on the No11 seed Gilles Simon, survived a testing two-and-a-half tussle with Janko Tipsarevic. Should he win, he would then face another 30-year-old in the semis, either Ferrer or Melzer.

Perhaps Evergreen in the Everglades will have to become the catch-phrase of this year’s Miami Masters.