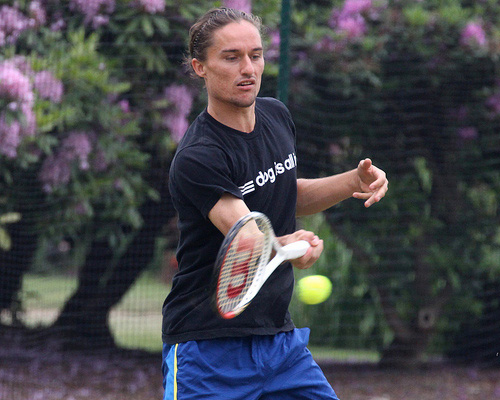 Alexandr Dolgopolov is through to the fourth round in Miami Photo: Marianne Bevis

The bottom half of the huge Miami draw was already down to the last eight, and it had worked out precisely according to plan. The top seven ranked men were through, and the eighth man Kei Nishikori, seeded No20, was ranked only four places below his victim, Grigor Dimitrov.

But the top half had a very different look. Eight of the 16 seeds were missing already, and of the eight unseeded men remaining, two were Lucky Losers and another was a qualifier—and one of those three was guaranteed a place in the fourth round.

Even more fascinating, all three top seeds in the half played unseeded men in a schedule with the potential both for one-sided contests but also for some new names to make their mark.

There was another noteworthy fact. The only remaining American, John Isner, was one of those names in contention—newly in the top 10, a semi-finalist in Indian Wells, but one of the only seed in the half to face another seed, No18 Nicolas Almagro.

But this was not a day that lacked form or ambition when it came to the lesser-known men.

Three of the unseeded men were at career-high rankings: Joao Sousa, No42, would take on Tomas Berdych, while No47 Roberto Bautista Agut took on Fabio Fognini. Most intriguing of the trio, though, was 23-year-old Serb Dusan Lajovic, newly into the top 100 at No89.

No sooner had Milos Raonic raced past the single-handed backhand of Guillermo Garcia-Lopez in 56 minutes on Grandstand, than another one-handed player arrived. Lucky Loser Lajovic is one of a growing contingent of young players who have chosen to swing the backhand with one arm. But his contest against Alexandr Dolgopolov had the makings of a David-and-Goliath contest.

The unconventional, all-court flamboyance of Dolgopolov had taken him from No57 to 23 in the rankings in a matter of weeks, after reaching the final in Rio and the semis in Indian Wells and Acapulco. Along the way, he had beaten no fewer than six top-20 players. Lajovic had scored his first ever Masters win this week, and had won not a single main tour match in 2013.

However this turned into a match that everyone wanted see.

The first set offered up just one break point chance, and Lajovic took it to storm to an unexpected 6-3 advantage. The tennis was gripping, fast and furious, with some fine serving—each dropped only two points on their first serve—and varied spin, angle and pace.

The second set turned things on their head, as Dolgopolov showed just why he is such an exciting talent. He could do no wrong, making winners from impossibly wide balls, slotting sliced drop-shots, hurtling to the net for neat serve-and-volley plays and, for good measure, ripping the odd passing shot down the line. Lajovic could do little about it and endured a 0-6 whitewash. The score was level, but Dolgopolov seemed to be in the driving seat.

Not a bit of it. Watched by compatriot and No2 seed Novak Djokovic, the young Serb took on his opponent in a gruelling 12-minute opening game, finally converting his fourth break point. Dolgopolov was rattled, double faulting twice, and saw a 2-0 gap open in the score.

Then the Ukrainian responded, served to love and broke back. Still Lajovic resisted, and both went on the attack to try and gain the upper hand. Lajovic broke again but, serving for the set, a combination of inexperience on his part and an explosion of shots from Dolgopolov brought another break. And if all that did not create enough drama, the heavens opened and play came to a halt.

Back on court an hour later, they went to a tie-break, and Lajovic raced to a 3-0 lead. Dolgopolov came back, but as the game headed to its conclusion, the Serb suffered perhaps the worst ill fortune of the tournament so far. Serving at 5-5, he took control of a rally, fired a forehand deep to the Dolgopolov backhand but it was called out. The umpire quickly over-ruled—and the ball was shown to be in by around 10cm—but the point had to be replayed. This time, Lajovic lost it to face match point instead of having match point.

One final long, tense rally and Dolgopolov was through, 7-5.

So one not-so-Lucky Loser was out, but another, Benjamin Becker—one more member of the huge over-30s club—was through. His reward? Raonic.

And so to the first big name of the day, Australian Open champion Stan Wawrinka, one of four single-handed players in the half and up against yet another mature man discovering his best at the age of 30. Edouard Roger-Vasselin hit a ranking high of 35 last month and, by coincidence, was the losing finalist to Wawrinka in Chennai this year. Could the Frenchman turn the tables in Miami?

Well he was the first to earn a break chance, at 4-4, but Wawrinka came up with some outstanding serves and a huge backhand down-the-line pass to hold. It was just the prod he needed, and Wawrinka broke down considerable Roger-Vasselin resistance to break for the 7-5 set. It had been a sparkling way to seal the lead, too: Wawrinka notched up 24 winners out of his 39 points.

The Swiss was on a surge, playing with power and precision, aggressive tennis reminiscent of what won him his first Major. Soon he was 3-0, but Roger-Vasselin was impressively resilient and broke back in the seventh. However, the attack of Wawrinka was relentless and thrilling, and he broke to take the set and match, 6-4.

The Frenchman played intelligent, varied and classy tennis, but on the slow Miami courts, he could make only 13 winners to his 11 errors. No such problem for the Swiss, seemingly able to generate winners from anywhere on the court. No fewer than 44 of his 77 points were outright winners.

Stan the Man, the new star on the Grand Slam stage, may have needed Indian Wells to find his groove again: The desert marked his only loss in 15 matches so far this year. But now, perhaps, his first Masters title is also just around the corner—though he will be sternly tested by another of tennis’s shot-makers, Dolgopolov. It will be a match to relish.