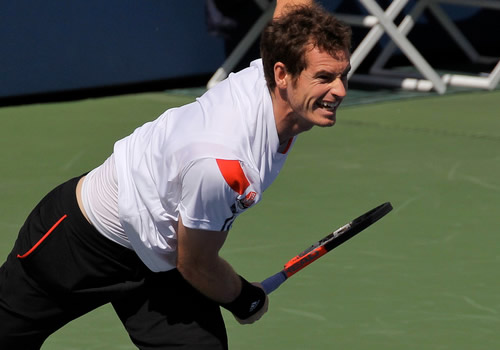 For many, this stage of the impressive 96-man draw in Miami is the best of the entire tournament.

It’s the fourth round, and the day on which the two halves move from playing on alternate days to filling the schedule on one bulging, star-packed Tuesday.

Eleven of the top 12 players in the world would compete for a quarter-final place, the only missing man being Juan Martin del Potro who withdrew before the tournament began. But in a nice turn of fate, the Lucky Loser who replaced the Argentine, 32-year-old Benjamin Becker, held del Potro’s ground and became the only unseeded man among the last 16.

It was, indeed, hard to know where to look. The Australian Open champion and No3 Stan Wawrinka took on the charismatic shot-maker Alexandr Dolgopolov on Grandstand court: a show-piece match by any standard.

No4 seed, the intense, popular David Ferrer, took on another young and exciting shot-maker in No20 Kei Nishikori, also on Crandon Park’s second court.

Even the sole remaining American, John Isner, playing world No7 Tomas Berdych, could not find a space on the violet and green Stadium Court, for “the big four” had booked their places with the fans—and there was no denying their claim.

Three of them—Roger Federer, Novak Djokovic and Andy Murray—were former champions. The fourth, Rafael Nadal, was the top seed and a three-time finalist, and chasing one of the few Masters crowns missing from his resume. And all of them were finding their form.

Nadal had won titles in Doha and Rio, Djokovic the first Masters of the year in Indian Wells, beating Federer in the final, but the Swiss had the Dubai title under his belt. Murray, working his way into form after returning from back surgery at the start of the year, already had 16 wins this season, 14 of them on hard courts.

First off the mark was Djokovic, who had played only one match thus far, and he took on veteran Spaniard Tommy Robredo who had beaten two feisty opponents without dropping set. He put up a sterling effort against Djokovic, but lost, 6-3, 7-5.

Last year’s finalist Ferrer and Nishikori also entered their third match without having dropped a set. When they met at the same stage here last year, Ferrer ran out the easy winner, but this rematch was a fine, high-quality contest from the off.

With a set apiece, two breaks apiece, and more than two hours on the clock, it was anyone’s game, and that was still the case when they reached the inevitable tie-break after almost three hours.

Nishikori took the early advantage but Ferrer, looking uncharacteristically depleted and heaving for breathe, levelled to finally serve for the match. But he failed to convert, and Nishikori fended off three more match points to serve out the match with only his fourth ace of the match, 9-11.

His opponent in the quarters would be either Federer or Richard Gasquet, a delight of a match-up between familiars who also had clean slates, neither dropping a set thus far.

But before that quarter-finalist was determined, there was the small case of defending champion Murray against the unpredictable talent of Jo-Wilfried Tsonga. And while Murray had looked outstanding in beating Feliciano Lopez, he had wavered somewhat in his first match, dropping the opening set to Matthew Ebden.

But if there was any doubting Murray’s growing confidence—almost in defiance of his surprising split with coach Ivan Lendl just ahead of the tournament—his performance against Tsonga dispelled it. The Frenchman stayed with Murray until 4-4 in the first set but was then broken: 6-4 to the Briton with just two points dropped on his first serve, 17 from 19.

The second set went by in a flash, despite an apparent twinge in Murray’s hip. He broke in a long and sapping first game and again in the fifth, finally closing out the match in an hour and a quarter, 6-1.

Especially pleasing was Murray’s serving, which he delivered at well over 70 percent throughout and dropped only six points out of 39 on his serve.

And that sets up one of the most highly anticipated matches of the tournament, a first rematch between Murray and Djokovic since the Wimbledon final last summer. Three-time Miami winner Djokovic may lead two-time Miami champion Murray by 11 to eight overall, but Murray famously won that last contest.

Meanwhile, on Grandstand, Wawrinka made a shock exit from the tournament after making a slow start against Dolgopolov. The Ukrainian ran to an early lead, and clinched the first set 6-4, but he was struggling with blisters and, in truth, both men lacked the fire-power they had shown in coming through their previous matches.

Wawrinka rallied to take the second set, 6-3, but could not sustain his momentum, and Dolgopolov raced to a 6-1 victory.

But what of the two super-stars, the two pin-ups of the tennis court, the two men pursued at every turn, who never fail to fill a stadium?

Federer and Nadal, on opposite sides of the draw, were yet to come, yet to try and claim their places in the quarter-finals.

Miami Masters 2014: Federer keeps his foot on the pedal – can Nadal follow?