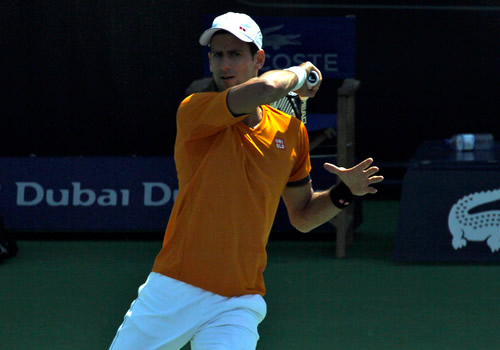 Novak Djokovic is through to the last four Photo: Marianne Bevis

And so to the quarter-finals of one of the biggest tennis events outside the four Grand Slams, and all the usual suspects were present and correct.

The “big four”, they have long been called, and with good reason—not just because of their dominance at the Grand Slams, though in almost a decade, only two other active players have denied Roger Federer, Rafael Nadal, Novak Djokovic and Andy Murray. For they also dominated the jewels of the ATP tour, the Masters tournaments—of which Miami is one of the most prestigious.

In the past 35 Masters, this quartet has taken 33 titles—27 of the past 28. Not surprisingly, they are also among the top six on the all-time list of Masters titles, with Andre Agassi and Pete Sampras breaking the stranglehold. Should Djokovic win in Miami, it would mean he, Nadal and Federer filled the top three places.

Three of these same men, Djokovic, Federer and Murray, accounted for seven of the past nine Miami titles and the fourth, Nadal, had reached the final three times—and was the No1 player in the world.

Against such a setting, then, the bottom half of the draw, which played out a day before the top half, looked a formidable place for the 24-year-old No20 seed, Kei Nishikori. He was the fourth man among three former champions: To win the title, he would have to beat first Federer, then Murray or Djokovic and finally, perhaps, Nadal.

Even with a 1-1 record against the mighty Swiss, his gruelling three-set win over David Ferrer would surely weigh heavy against Nishikori.

But that intriguing match-up would have to wait for the real star of the Wednesday show between two of the closest and toughest adversaries in tennis: Djokovic and Murray. And there was plenty of back-story to add spice to the contest.

Murray may be the elder of the two by a week, but he trailed the Serb 11-8 in matches, and was also 1-2 down in their three previous Miami encounters. However in their last meeting, the Wimbledon final of 2013, Murray was victorious in straight sets.

Since then, they had trod very contrasting paths. After playing in the Davis Cup in September, Murray left the tour to have back surgery and was only now starting to show the form that had won Wimbledon. He was yet to beat another top-10 player: Would his first be Djokovic?

While Murray was out of action, slipping from No2 to a current No6 in the rankings, Djokovic had gone on a surge second only to his outstanding 2011. He closed 2013 with seven titles from nine finals and on a 24-match winning streak. And he arrived in Miami, as a three-time former champion, with his first title of the year from Indian Wells.

Yet there was no question that Murray was getting back to his old self, helped not a little by being in his second home, the place he spends much of the year training—often at this very Crandon Park. Even the shock separation from coach Ivan Lendl just as the tournament got underway seemed to have been put comfortably behind him: Lendl was smiling in his player’s box, and Murray had taken to writing “Stay Calm” on the camera after his matches.

He showed confidence in himself, too, by opting to receive. Murray was the tournament leader for points won returning first serves, and was second only to Nadal in return games won.

It was not Djokovic who came under pressure on serve first, though. Murray faced down two break points in the fourth game with touches of brilliance: first a backhand angled flick of a winner, then a forehand cross-court onto the far line.

The standard rose steadily with each game, and by 4-4, both were serving at well over 80 percent. But suddenly, serving at 5-5, Djokovic floundered, made two double faults and faced break point. Yet he did not doubt himself: looking supremely calm, he threw in an ace to hold and went straight on the offensive against Murray’s serve.

Then came what would be a significant turning point. Djokovic raced into the net to put away a touch volley, but clearly played the ball on Murray’s side of the net. Unfortunately the umpire did not agree, but once the point was replayed on the big screens, everyone else did, and Murray lost concentration. He missed two easy points, and then a final error handed Djokovic the break and the set, 7-5.

Murray was still distracted as they prepared for the second set but finally channelled his anger into his finest passage of play of the tournament—perhaps of the year so far. From 40-0, Djokovic pulled him back to deuce with two immaculate drop shots, but Murray kept finding remarkable counter-punches, especially off his backhand. He closed out the game with a running backhand reach that looked impossible—and made a clean winner into the very back corner of the court.

Now with the bit between his teeth, Murray was all over Djokovic, firing backhand winners at will to break—but as quickly as he had turned the set his way, he handed the advantage back. He saved two break points, was denied a winner that was called out because he had used up all his challenges, and the Serb wrenched back the break.

From 3-3, Murray seemed again to lose concentration and the errors piled up. But there was no getting away from he fact that Djokovic was playing near flawless tennis, firing clean and deep ground strokes to within inches of the baseline, and switching direction at will. He completed a run of four games to take the set and match, 6-3, in an hour and a half of tense, and sometimes hypnotic tennis.

So Djokovic moves to within one match of 30 wins in Miami and into his 39th Masters semi-final. He is looking formidably good—good enough perhaps to become the second player ever to win the Indian Wells-Miami double.

The other man? Federer, who Djokovic may have to beat to keep his title hopes alive. First, though Federer had to reach his 50th Masters semi-final…

Miami Masters 2014: Federer keeps his foot on the pedal – can Nadal follow?