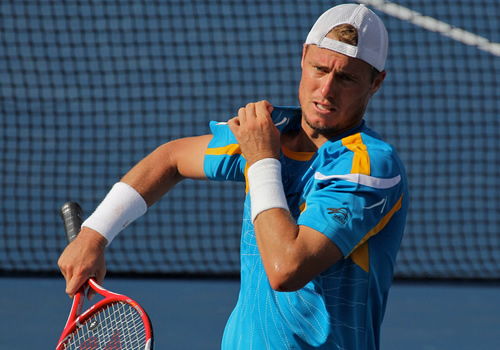 He had just won his first Grand Slam at the US Open and was about to win his first ATP World Tour Finals—called, back then, the Masters Cup—and would go on to claim the Wimbledon title and another Masters Cup the next year.

This week, a more mellow but equally pugnacious Hewitt, now a father of three but still wearing his rebellious badge, a reversed baseball cap, has reached a big milestone in one of the most eventful careers on the tour: 600 match wins.

Perhaps it was fitting, though not unusual, that he did it the hard way, from a set and a break down, beating Dutchman Robin Haase, 3-6, 6-3, 6-3. Fitting, too, that it was one of the most difficult and courageous shots in the book, a backhand lob over the tall Haase, that proved to be the winning shot after two hours of play.

Now 33-years-old and ranked 44, Hewitt is the third active player to win 600 matches, behind Roger Federer (942) and Rafael Nadal (675), and both men have a place in the Australian’s landmark.

It was Federer who Hewitt beat in Brisbane at the start of 2014 to claim his first title in three and a half years—and incidentally it was Federer who he beat from a set down to win his previous title in Halle in 2010. Now he would take on the current No1 Nadal in an attempt to win his 601st match in their first meeting in almost four years.

Hewitt was… well his usual self when asked about the task ahead: “Obviously taking on the World No1 is not going to be easy, but that’s why I still play the game, to have the opportunity to have a crack at the best players.”

What makes the Hewitt story a cut above the ordinary is the tough road he has travelled to get to 600. And year ago, in fact, he was ranked barely inside the top 100. Just 20 months ago, he was outside the top 200.

Having peaked at such a young age—and his achievements at the US Open were consistently high, not falling before the quarters for seven consecutive years—he began to suffer from injuries with increasing frequency.

It means I have been around for an awfully long time. I’m getting old!

Hewitt’s never-say-die, blood-on-the-court intensity pulled him through what seemed often to be impossible matches despite his not owning one killer shot, one effort-saving shot, in his all-court arsenal. He chased down, scurried and retrieved what many would have given up as lost causes, and always seemed to get more out of his serve than someone of his slight 5ft 11in frame should do. His gritty will-to-win, his competitive fire and his variety of skills made him a compelling man to watch, but it was a demanding style to sustain.

In 2008 Hewitt succumbed to hip surgery, in 2010 it was surgery on the other hip followed by a hand injury. In 2011, he had foot surgery, battled with a groin injury and missed the end of the year with ongoing foot problems. In 2012, he had more foot surgery, but returned to the fray to reach his first final in Newport since winning the 2010 Halle title.

Come 2013, and he clawed his way up the rankings the typically hard way: Half his matches went to a deciding set. There were four of them in his semi-final run at Queen’s, where he beat higher-ranked Grigor Dimitrov, Sam Querrey and Juan Martin del Potro before losing to eventual champion Marin Cilic—in three. He reached the final of Newport via three three-setters and lost in the semis of Atlanta to John Isner in a final set tie-breaker.

Hewitt again saved his best—both tennis and fighting spirit—for New York: four sets in the first round; five sets and four hours to beat del Potro in the second; four sets and three hours in the third; and, in one of the matches of the year against Mikhail Youzhny in fourth, a four-hour thriller that Hewitt lost from a break up in the fifth.

Along the way, he led Australia back into the Davis Cup World Group 13 years after making his debut in the 1999 winning squad.

His efforts recalled what had almost became one of his finest hours back in 2005, a run to the final of the Australian Open. Contending with a hip injury, Hewitt beat Nadal, David Nalbandian and Andy Roddick in three consecutive five-set matches, not surprisingly losing in four more sets to Marat Safin at the final hurdle.

So what did Hewitt make of his new milestone in an already memorable career?

“A few years ago when I had the last couple of surgeries I probably would have doubted I’d get to this stage anyway. The tough times coming back from surgeries, that’s motivation, it’s only really my close group who know what we had to do to get back out here and compete again.

“The start of my career, I had no surgeries—or big injuries—at all. Then I had five surgeries in four years, and that was tough to come back from.”

But come back he did, just as he has done many times before, and has now spent more than half his life as a tennis pro. He also happens to be, since the start of 2014, the top-ranked Australian again. Yet back when he dropped to 233 in July 2012, it looked as though another Australian teenager was ready to take over his mantle.

The 19-year-old Bernard Tomic hit what is still a career-high of No27 after 12 months of stand-out performances that, while inconsistent, showed huge promise.

At Wimbledon in 2011, still just 18, he came through qualifying to make a run to the quarters where he took eventual champion Novak Djokovic to four sets. He went on to beat Stan Wawrinka in the Davis Cup, Kevin Anderson in Shanghai, and then survived two five-setters on an impressive run to the fourth round at the Australian Open.

But amid personal struggles with his coach-father and a serious loss of confidence, he went from winning the first title of 2013 in Sydney to ending the year with 18 first or second round losses.

And while 2014 began with a flurry in a showing in Sydney, Tomic was knocked back again by a hip injury that forced his retirement in the first round in Melbourne.

He attempted to make his return from surgery this week in Miami—playing out on Court 7 just as Hewitt was taking to Stadium Court—and he may have wished he had taken the expected 12 weeks recuperation rather than setting a very different record. In falling 6-0, 6-1 to Jarkko Nieminen, Tomic lost the shortest match recorded by the ATP, 28mins 20secs, winning just 13 points.

For all his headline-making, Tomic was pragmatic:

“This was the first match back after the operation. It’s all part of the rehabilitation process. I’m not disappointed. I just have to keep working to improve my game.

“I felt like I did the best as I could, and I’m happy that I’m coming back. Hopefully in a little bit of time I can get back to 100 percent. It’s not easy, but I’m trying my best to get there.”

With his ability, his height, and such big scalps in his resume at such a tender age, he must hope and expect to outdo his own career-high. And if he wants any inspiration, and that special x-factor, he needs look no further than his compatriot.