Miami Premier 2013: The slow-maturing Li Na is back to her best and faces Serena Williams in the quarter-finals 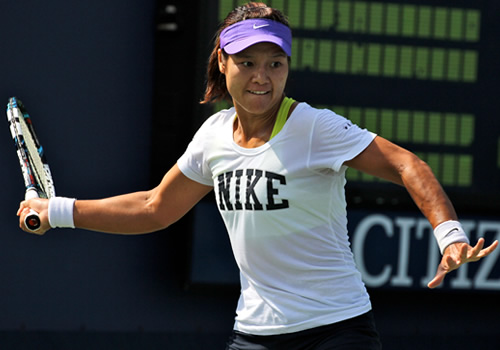 The witty, smart and slow-maturing Li Na is back, and for tennis fans, that is certainly something to celebrate.

The 31-year-old has never been one to conform to stereotypes. Most players would not, for example, put their tennis career on hold while they took a journalism degree. Nor would they reduce a packed Grand Slam crowd to laughter with their on-court interviews.

And most do not carry the weight of expectation of million upon million of compatriots: As the first Asian, male or female, to reach a Major final, as she did in Australia in 2011, she became nothing short of a superstar in China. And her subsequent win at the French Open drew unprecedented global audiences.

Li’s tennis, too, is a joy: a shot-maker who strikes the ball flat and clean, a mover of balance and style, and a tactician of the first order, able to create chess-like sequences angled to perfection.

Yet she has also shown the desire and intelligence to step back, reassess the falling-off that came after her Grand Slam success, and take a fresh look at her game with a new coach. She went through rigorous new training regimes, added a new top-spin forehand and developed more net-play. And she also worked at better managing an emotional personality that used often to overflow on court at tense moments.

And behold, Li mark II, one of oldest women in the draw and one of the oldest to win a first Grand Slam, returned in the summer of 2012 with something like her old form and confidence, and reached back-to-back finals in Montreal and Cincinnati—winning the latter.

With another intensive training block behind her, Li hit 2013 in fine style to win in Shenzhen, reach the semis in Sydney and play an outstanding Australian Open, taking out the Nos 2 and 4 seeds, Maria Sharapova and Agnieszka Radwanska, on her way to the final.

She then took the first set against defending champion Victoria Azarenka, but twice fell with a twisted ankle, the second time crashing her head on the court. She continued after receiving medical attention, but Azarenka went on to claim the title, and Li’s injury took her off the tour through Doha, Dubai and Indian Wells.

All of which makes her return to Miami both welcome and intriguing. Since beating Sharapova in Australia, the Russian has won Indian Wells, risen to No2 in the rankings and could claim the top spot here. In hers and Li’s way is the current No1, Serena Williams. Has Li arrived at her first tournament since Melbourne in good enough shape to affect either woman?

What made Li’s fourth-round match especially exciting was the woman who stood on the other side of the net, a genuine star in the making in the shape of teenager Garbine Muguruza. A quick look at her rankings hinted at what to expect: 432 at the end of 2010, 249 by the close of 2011 and up to 104 by the start of 2012. Since then, she has risen to 73, came through qualifying in Indian Wells to advance to the fourth round—and there she put up a tough fight against No6 seed Angelique Kerber.

And the tall, powerful naturalised Spaniard—reminiscent in her attacking, confident style of a right-handed Laura Robson—improved still further in Miami, beating first No23 seed Anastasia Pavlyuchenkova and then No9 Caroline Wozniacki, 6-2, 6-4.

Li, though, looked as though she would tame the 6ft 19-year-old. She broke straight away and went toe-to-toe with the woman almost 12 years her junior. Indeed, the tennis was gasp-inducing in its power and pace, depth and accuracy. The soundtrack was like a sequence of gun-cracks as racket struck ball, and Muguruza threatened quickly to break back. She calmly did so, with Li serving at 5-2, and then pushed the set to a tie-break.

Once upon a time, Li’s temperament might have buckled, especially against such a remarkably temperate opponent, but the Chinese forehand cranked up a level to take a 6-1 lead, only for Muguruza also to up the tempo and pound her way back to 6-6.

The crowd loved it, and whistled their approval as this intense contest unfolded, and it was Li who held at the last to take the opening set—though she scored one point less, 45 to 46.

The impressive teenager appeared unfazed at losing the 65-minute opening set and went after the Li serve just as she had in the first set, but she failed to convert a break point and, just as in the opening set, it was Li who broke first for a 2-0 lead.

Still Muguruza did not back off, and earned another break point chance, but the famous angled Li forehand came to her rescue to take a 3-0 lead.

Now, with a rising number of errors from Muguruza, Li drove quickly to the finish line, broke again, and took the match, 6-2.

The young Spanish woman got a deserved roar of support as—and will surely end 2013 close to, if not inside, the top 20. But Li, as is her way, explained her own success with humour: “I was two years older so I had a bit more experience on the court.”

Li has never gone beyond the quarters in Miami and, had her draw been kinder, she might have hoped for more this time. But she finds herself in the same quarter as Williams, who has beaten her five out of six times. Not since she lost to Williams at this stage in Miami in 2009 has Li won—but her hopes must have soared if she caught sight of the match that followed her onto centre court.

For it was Williams, aiming this year for a record sixth Miami title, against the David Ferrer of the women’s tour, the 5ft3in Dominika Cibulkova.

Williams broke in the opening game, but then the match turned on its head as the top seed’s game collapsed in the face of the Slovak’s woman’s energetic attack. Cibulkova broke straight back and a shocked crowd watched the bouncing, increasingly confident No13 seed win six of the next seven games for a 6-2 set. Williams had made just two winners, one of them an ace.

The American continued to look fragile well into the second set, too, and was down 1-4 before the fire appeared to ignite. She tried to explain it afterwards:

“Mentally I was just fried and I was thinking about everything but tennis. Then I just had to pull myself back together… I just thought to myself, ‘Well, I’ve been down worse. It’s nothing new. Just keep fighting.’ I never give up. Doesn’t matter whether it’s in life or on the tennis court, I keep fighting.”

The Slovak kept powering away, full of energy, so it was down to Williams to turn it around. Sure enough, her serve improved, she made a couple of huge backhand winning returns-of-serve and broke to herald a six-game run that took her through a 6-4 second set and on to an immediate break in the third.

Still the Cibulkova heart and legs kept pumping, and she broke back, but Williams, with some of the energy and lustre that was lacking in the first half of the match, was not for turning. She broke again, urged herself through the sixth game to hold 4-2, and finally served out the match to love—with three aces.

So Li has no escape: It will, after all, be the quarter-final to watch, a battle of wills between two 31-year-olds.

The millions of fans across their two home continents will also look forward to it—and many others beside.

The other quarters are between No4 seed and defending champion Radwanska and No30 seed, Belgian Kirsten Flipkens—the winner to face the survivor of the Williams-Li battle.

In the bottom half, Sharapova continues her seamless progress—she has dropped just 12 games in three matches—to face No8 seed Sara Errani, who came back from a set down to beat Ana Ivanovic. Sharapova does not just tower over the Italian in height, by 10ins, but in her 3-0 head to head, the last win just a fortnight ago in Indian Wells.

The winner will take on either No22 Jelena Jankovic or another 30-year-old, Roberta Vinci, who also battled back from a set down—for the third consecutive time in the tournament.