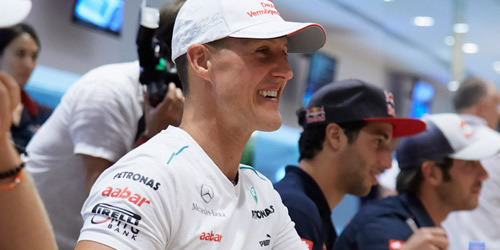 Michael Schumacher has announced that he will retire from Formula 1 at the end of the season.

“I have decided to retire from Formula 1 at the end of the season. Although I am still able to compete with the best drivers, at some point it is good to say goodbye,” said Schumacher.

“During the past month I was not sure if I still had the motivation and energy which is necessary to go on.

“It is not my style to go on if I’m not 100 per cent with it. With today’s decision I feel released from those doubts.”

Schumacher returned to F1 in 2010 with Mercedes but only managed to secure one podium finish and no victories.

“I have said at the end of 2009 that I want to be measured by my success, and this is why I had a lot of criticism in the past three years which partly was justified,” he continued.

“It is without doubt that we did not achieve our goal to develop a world championship fighting car within those three years.

“It is also without doubt that I cannot provide a long-term perspective to anyone. But then it is also clear that I can still be very happy about my overall achievements in Formula 1.

“In the past six years I have learned a lot, also about me, and I am thankful for it: for example, that you can open yourself up without losing focus.

“That losing can be both more difficult and more instructive than winning; something I had lost out of sight sometimes in earlier years.