Rio Ferdinand, Michu and Ashley Williams tweet their thoughts after Swansea are 2-0 winners in the first leg of their semi-final 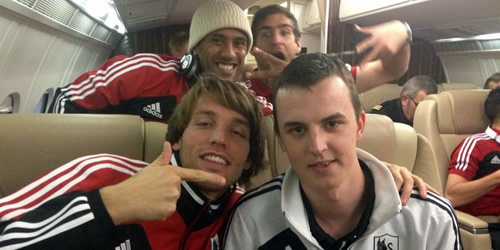 Swansea City took a big step towards their first League Cup final with a 2-0 victory over Chelsea in the first leg of their semi-final tie at Stamford Bridge on Wednesday.

Goals from Michu and Danny Graham helped the Swans to a shock win at the west London outfit, with Michael Laudrup’s men set to face the Blues in the reverse fixture in a fortnight’s time.

Here is the best of the Twitter reaction from the professionals past and present, including Swansea’s goal machine himself.

Manchester United defender Rio Ferdinand ‏(@rioferdy5) is getting jealous of all the attention on Michu: “Michu….!! Hogging the headlines now is Michu with all his scoring!!”

Sunderland’s Michael Gray ‏(@mickygray33) is even more desperate to see Graham move to the Stadium of Light: “Hahaaaaaa wow wow wow is that the Danny Graham that I just said Sunderland should sign??? Hmmmmm!”

Reading striker Noel Hunt (@boyhunt) thinks Ba’s goal should have stood: “Wow I think Ba goal should of counted!! I feel for Ivanovic tho!! Great goals from Swansea!”

Stoke striker Michael Owen ‏(@themichaelowen) can’t call who will be in the Wembley final: “Wow. Two Cup shocks on the cards? Hard to call.”

Ex-Liverpool midfielder Dietmar Hamann (‏@DietmarHamann) can see Torres leaving: “I wouldn’t be surprised if Torres left Chelsea before the end of the window …he won’t get much game time now Ba has signed.”

Finally, the Swans captain Ashley Williams (‏@AshWills84) won’t be resting on his laurels: “We enjoyed the result tonight. But back to work in the morning. This means nothing only halfway. Plenty of work to be done yet.”

Stoke transfers: I expect Owen to stay until the summer, says Pulis