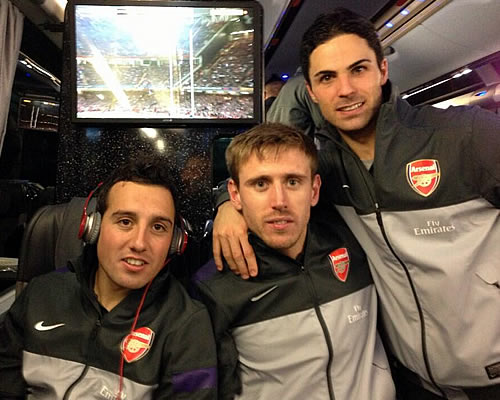 Manchester United moved a staggering 15 points clear of Manchester City in the Premier League title race with a 1-0 victory over Reading at Old Trafford.

Elsewhere, Arsenal got back to winning ways with a 2-0 win at Swansea as their European rivals Liverpool lost 3-1 to Southampton, and Aston Villa won 3-2 against Queens Park Rangers.

Here is the best of the Twitter reaction from the professionals, both past and present, to a dramatic day at both ends of the Premier League table.

Former Aston Villa midfielder Ian Taylor (‏@IanTaylor7) is thrilled to see his side win: “We could’ve been three down in first half but the lads kept going. @andiweimann MOM deserved. Worked tirelessly and hand in 2 goals. RESULT!! A big mention again for @bguzan Some MASSIVE saves today!! Well done son!!”

Villa midfielder Andreas Weimann (‏@andiweimann) praises his team-mates for their victory: “Buzzing so much ! What a win … Brilliant from every single one of us!”

QPR defender Chris Samba (‏@cs4christsamba1) is gutted: “Big disappointment, don’t get how we ended up losing that one, don’t get it but believe we can still do it we fight until the end!”

Arsenal midfielder Mikel Arteta (‏@m8arteta) is thrilled to get back on track in the league: “Good win lads!! Great effort and spirit!! Thanks to the fans, absolutely brilliant they were!!!”

Gunners forward Alex Oxlade-Chamberlain (‏@Alex_OxChambo) praises Swansea for making it a tough game: “Good performance and just what we needed today…three points! Credit to Swansea, they play some really good stuff and made it hard at times.”

Former Liverpool midfielder Dietmar Hamann (‏@DietmarHamann) reckons the Reds’s top-four bid is over: “Just heard the LFC result. Very disappointing after a good win against Spurs. Another year without CL football. Top four finish next season a must!”

Ex-Reds midfielder Jason McAteer (‏@MCATEER4) urges Liverpool fans to look at the positives: “Understandable the frustration and disappointment in the result but there is a bigger picture. 22 goals in 8 – first defeat in five. #nottobad”

Southampton defender Luke Shaw (‏@Luke_shaw3) wants to see the Saints continue their form: “What a great game and a very important win for us! We need to carry on these performances now till the end of the season! #saintsfc”

Baggies keeper Ben Foster (‏@BenFoster) is happy with a clean sheet: “That was a really tough game! But we’re happy with the clean sheet and a point! Nice to see so many fans make the trip too! #WBA #COYB”

Finally, ex-United defender Mikael Silvestre ‏(@IamMSilvestre) reckons that’s it for the title race this season: “Has the EPL title race ever been over before Easter ??? #MUFC”