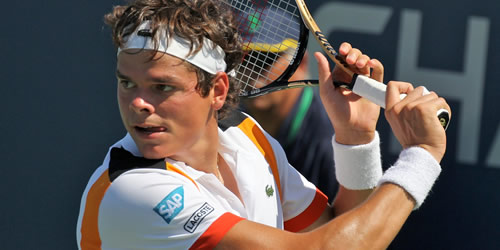 Two of the rising stars of the men’s tour, 21-year-old Milos Raonic and 22-year-old Kei Nishikori continued their David and Goliath antics in Tokyo to set up an intriguing final at the Japan Open in Tokyo.

Following home hero Nishikori’s dispatch of the No2 seed Tomas Berdych in the quarter-finals, Raonic put out the top seed, Andy Murray, in the semis.

Although Canadian Raonic is far from David-like in proportions—his 6ft 5in frame and huge-serving game make him a giant of a challenge—he stood toe-to-toe with the US Open and Olympic gold medal winner, and it was Murray who had won their last encounter, in New York in straight sets.

But on this occasion, Raonic showed just why he has been tipped for great things since he burst into the top 100 last year. Despite hip surgery 15 months ago, he continued his impressive rise in 2012, via two titles, to No15 and a win here would keep alive his hopes of qualifying for the World Tour Finals.

Perhaps it was that prospect that lifted the Canadian when he most needed it. He had already come through a gruelling two-and-three-quarter-hour three-setter, from a set down, to beat Janko Tipsarevic, and it took him the same time to overcome Murray from 1-4 down in the final set. Twice he faced match points at 5-6 before beating Murray 6-3, 6-7, 7-6.

Raonic is at a career-high ranking and at No14 in the race to London. By reaching the semis, he had already overtaken John Isner to rise to 13 and winning the Tokyo title would take him to No10. But to achieve such a significant rise, he must beat the man that has set the home crowd alight, Nishikori.

The 5ft 10in Japanese man filled the David role to perfection against the towering 6ft 5in Czech, neutralising the power of the world No6 with speed, variety and sharp, crisp hitting. It took him under two hours, in a hugely impressive display, to reach the semis, 7-5, 6-4. It took him considerably less to race past the 46-ranked Marcos Baghdatis—precisely one hour.

Nishikori had lost all three of their previous meetings, including earlier this year in Brisbane, all in straight sets. This time, the tables were turned, and he broke Baghdatis twice in each set for a classy 6-2, 6-2 win, never facing a break point of his own.

It makes Nishkori the first ever Japanese finalist in Tokyo and he will be playing in his first final since Basel last year. Remarkably, he has not won a title since his first as an 18-year-old at Delray Beach in 2008. After missing much of 2009 following elbow surgery, he had to rebuild his career and broke into the top 20 again earlier this year.

The final will be fascinating. Raonic and Nishikori have never played one another before, they are separated by just two places in the rankings—and by chance, by two days in their birthdays. They both started their professional careers strongly, were knocked back by injury and surgery, and have risen again at some speed through the rankings. But they each pose very different challenges.

Physically, this is another David and Goliath face-off, with Raonic towering 7ins over his opponent and wielding 22 more kilos around the court.

The Canadian thrives on hard courts where his serve is a lethal weapon. He tops the year’s list for first serve points won and service games won, and is almost level with John Isner on aces delivered. He has fired 49 in this tournament alone.

But Nishikori has different tools, different skills. He is 10th on the tour in successfully scoring off both an opponent’s first serve and second serve, and he is ninth in return games won.

He is quick about the court and very good at moving his opponent around, too—and these will be crucial factors in defusing the power of Raonic.

On paper, the big man from Canada will be the favourite, especially on hard courts and especially with the carrot of London dangling before him. But with every man, woman and child in at the stunning Ariake Colosseum roaring on their man, it is possible, just possible, that Nishikori could make history in Tokyo this weekend.