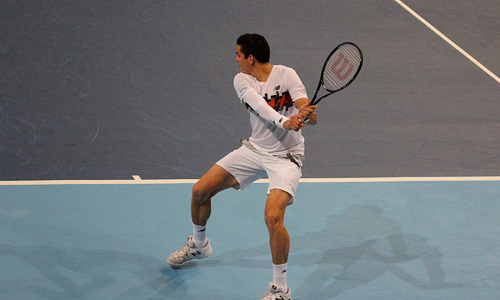 Milos Raonic has had such a fine year that he was on course to be the youngest man to make his debut at the World Tour Finals since Juan Martin del Potro in 2008.

From No11 at the start of 2014, the Canadian rose to No6 on the back of some breakthrough results: the semi-finals at Wimbledon, Rome and Cincinnati, the quarters at Roland Garros, Indian Wells, Miami, Toronto and Monte Carlo.

That’s strong runs at two Grand Slams and six Masters, not to mention the title in Washington and the finals of Tokyo.

Little goals I’ve set out throughout the year I’ve been able to achieve. That’s definitely a good thing. I just want to keep pushing myself to do better and I very eagerly want to do better

No wonder the 23-year-old was knocking on the London door. But illness forced him to retire in the first round at Shanghai and he followed that with another opening loss in Moscow last week.

He therefore arrived in Basel for the first time with some incentive and not a little pressure, for he has now slipped out of the top eight down to 10.

He went to London as the alternate ‘ninth’ last year, and has now regained ninth place, overtaking David Ferrer, after beating Steve Johnson, 7-6, 6-4.

Raonic was certainly confident ahead the tournament, as he explained to the ATPWorldTour.com:

“I feel more confident because this is my best surface—indoor hard courts. It is the part of the year I look forward to most. Hopefully I can play my best tennis and make the most of this opportunity in Basel.”

He emphasised what an important week it was not just for him but for the others in contention: Andy Murray and Ferrer playing in Valencia and Grigor Dimitrov in Basel.

“This is an important week, but I think everyone knows the Race To London will come down to Paris. The players that are able to play their best tennis at this stage are obviously going to earn the right to play in London. Everybody’s a little bit tired, but there is that extra motivation because everybody wants to be in London.”

With an extra coach in his corner—Riccardo Piatti has joined Ivan Ljubicic—Raonic is adding new strings to his bow all the time. Not just a big serve and forehand, the tall Canadian has a good tactical brain and he has worked hard on improving his movement, too.

“Things have been going well. I’m very happy with the progress I’ve made… Little goals I’ve set out throughout the year I’ve been able to achieve. That’s definitely a good thing. I just want to keep pushing myself to do better and I very eagerly want to do better.”