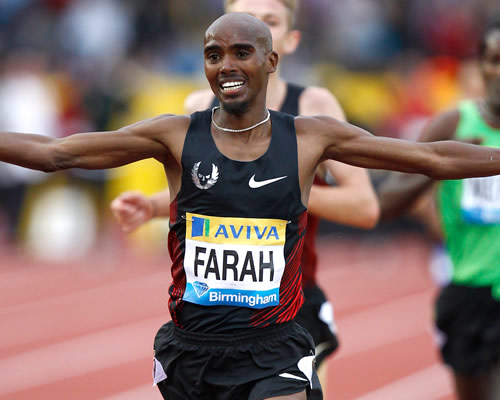 Mo Farah will forget about running and spend time with his family after completing his first marathon – admitting his summer plans won’t be decided until well into July.

Double Olympic champion Farah placed eighth on his 26.2-mile bow at the London Marathon on Sunday in an English record of 2:08:21 hours.

The 31-year-old missed out on his aim of breaking Steve Jones’ 29-year-old British record by just over a minute as world record holder Wilson Kipsang took the line honours.

Farah insisted afterwards that his marathon career was far from over at one but received both support and criticism for his efforts on the streets of the capital.

I haven’t got any plans at all. I need to forget about running

And, as for a summer that sees the European Championships, where he is the defending 5000m champion, and the Commonwealth Games scheduled, Farah won’t decide until much nearer the time.

The European Championships are set to take place in Zurich in August two weeks after the Glasgow 2014 Commonwealth Games and Farah said: “I haven’t got any plans at all. I need to forget about running to try and enjoy some time with my family.

“I decided to run in the Glasgow Diamond League to be able to test myself; to see if I’ve lost any track speed.

“Then we’ll make a decision in terms of the Europeans or Commonwealths. That’s the next step, to see where I am.”

Elsewhere on Sunday, a matter of days after the news broke that Sir Dave Brailsford would be stepping down as performance director of British Cycling, Sir Bradley Wiggins and Geraint Thomas took part in the gruelling one-day Paris-Roubaix race.

Neither could challenge Niki Terpstra for the win as Thomas and Wiggins finished in a group 20 seconds behind in the 257km race in seventh and ninth respectively.

Thomas helped Wiggins close down a gap to the leaders in the closing stages but the 2012 Tour de France winner and Olympic time trial champion wasn’t put off by the experience.

“There’s a tinge of disappointment because I had the legs,” said Wiggins. “It gives me confidence that I can match those guys and to go top ten in hindsight is a good result. I’d love to come back in the next few years and do it again.”

Meanwhile Olympic silver medallist Michael Jamieson was among the winners on the first four days of the British Gas Swimming Championships in Glasgow.

Jamieson won the 200m breaststroke, the event in which he claimed London 2012 silver, while plenty of British records have fallen with Commonwealth Games places up for grabs.

Rachael Kelly, Ross Murdoch, Sophie Taylor and Georgia Davies were also toasting success with London 2012 Olympian O’Connor admitting that she had to dig deep to win her second gold in the 200m medley.

“I’m very happy with my win. The 200 medley is my favourite event and I’m thrilled to have set a new English record and got under the consideration time,” she said.

“I felt good during the first 100m but it’s such a strong field that I knew they would come back if I didn’t push myself. I didn’t have a lot left in the last 25m but I dug really deep and am really happy with the time.”

England’s men’s and women’s water polo teams won the Commonwealth Championship titles for the first time ever in Aberdeen.

And finally Zoe Smith made history at the European Weightlifting Championships but admitted she didn’t realise it at first as she won bronze in Israel.

Smith, who finished 12th in the 58kg at the London 2012 Olympics before suffering terribly with injury in the aftermath, took bronze with a total of 204kg.

The Europeans are the 19-year-old’s first major international since London 2012 and her bronze is only the second overall European medal won by a British woman ever.

However Smith didn’t know whether to laugh or cry as she insisted the second clean and jerk element was less than impressive in her own eyes.

“Overall, I’m really, really happy that all the hard work I’ve put in in training and rehabbing my back has paid off,” she told BBC Sport.