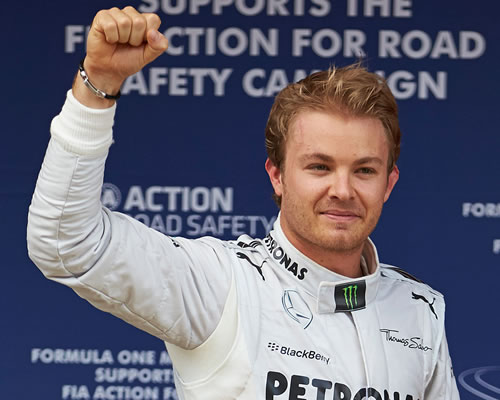 Nico Rosberg is not entertaining thoughts of emulating his father Keke by winning the Monaco Grand Prix after the the pole-sitter admitted he still has doubts about Mercedes’ race-pace.

“It’s always nice to hear these statistics but it doesn’t really change much,” said Rosberg, who is aiming to become the first son of an ex-driver to win at Monte Carlo.

“We’re improving but still a lot of question marks remain.

“It’s difficult to understand the tyres and get the most out of them. Here we made a step forward, but it’ll be difficult for the race as it’s still our main weakness.

“[Qualifying] was really difficult as conditions were changing so much. You really had to be out there at the right time with the right tyres, but I’m really happy everything went to plan.”

Hamilton looked to have secured pole before his teammate steamed through moments later to snatch it away by nine-hundredths of a second.

But the 28-year-old was relieved rather than disappointed, confessing to having problems getting to grips around Monaco so far.

“I’ve just been struggling with the car, to be honest,” said Hamilton. “It’s the first time I’ve had that experience here since 2005.

“Every year I was on it and didn’t have any problems with confidence or anything, but this weekend has been difficult.

“So I’m really happy to be able to help lockout the front-row for the team. Considering all the sessions in qualifying it’s a huge improvement for me.”

Vettel, who sat atop the standings in Q2, could not find the extra time when it mattered – but believes he will be able to capitalise should the Mercedes falter with their race-tyres.

“The car was very good so I think if there’s anyone to blame it’s me,” he said. “I’m not entirely happy with the last lap but still quite happy that there isn’t a Ferrari or Lotus ahead tomorrow.

“I think these guys will have to stop at least as much as us therefore sitting in third is still a good result and there’s still a good opportunity to win the race.”