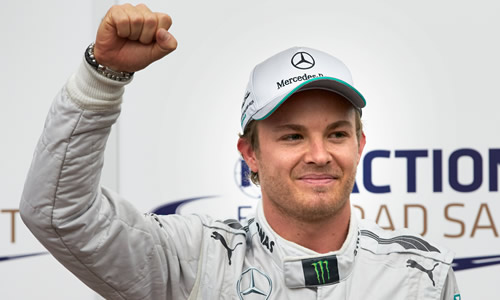 In an incident packed race – which included a 30-minute stop after a red flag – pole sitter Rosberg fought off Red Bull’s Sebastian Vettel and Mark Webber.

And after emulating his father Keke’s achievement of winning at Monaco 30 years ago, Rosberg junior was delighted with a race weekend that could not have gone better.

“I’m ecstatic,” said Rosberg. “This is my home, I’ve grown up here all my life and it’s really special.

“I had a terrible start and I was close with Sebastian and Lewis [Hamilton] but after that I controlled the pace.

“The car was really good, the tyres held on OK and that was really the key.

“The team gave me a great car. It’s really fantastic to see how much they have been able to improve in a short space of time.”

Despite Rosberg’s win, Red Bull increased their lead over Ferrari in the constructors’ championship to 41 points.

Drivers’ championship leader Vettel – who extended his advantage over Lotus’ Kimi Raikkonen to 21 points after the Finn finished tenth – was satisfied after claiming his fourth 2013 podium.

“We had a fantastic start but there was no room to overtake and I had to lift,” he said.

“I was surprised by the slow pace of the opening laps. You expect two Silver Arrows in front of you and we had two buses in front going for a cruise.

“They had a strategy but we did well to get past Lewis. I think we can be happy with the result. It was a good job by the team.”

Vettel’s team-mate, two-time Monaco winner Webber, agreed that 27-year-old Rosberg put in a faultless drive but was pleased with his tyre-management.

“It’s a special place to win it and it was a seamless weekend,” said the Australian.

“We got a good start. It was sod’s law that it was a short first corner. After that it was saving the tyres. It was completely predictable.

“It was nice to get Lewis but we will take that position. In general it was just driving around and saving the tyres.”

“It’s been a tough season with the promise the car has shown and we’ve delivered,” he said.

“Great result with Nico but a frustrating one with Lewis as he was equally as quick. We got pulled up in the safety car and lost the chance to have a better result.”