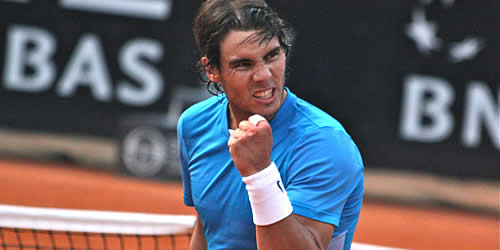 Eight, 20, 30, 33, 42, 236…They could be lottery numbers, but luck has little to do with it when it comes to Rafael Nadal and his continuing success at this Mediterranean-fringed, sun-drenched tournament in Monaco.

He brought up the first of those numbers by winning his eighth successive Monte Carlo Masters title this weekend.

This latest title takes him to an Open era record of 20 Masters titles from 30 Masters finals, bringing his overall tally of clay titles to 33.

It brings his unbroken run of match wins in Monte Carlo to 42 and his total number of match wins on clay to 236—he has lost just 18.

Extraordinary as these numbers seem today, when Nadal won the title in Monte Carlo last year, his success on the red dirt had become so commonplace that it barely needed comment. Clay ran in his veins.

But a month later, that all changed. Novak Djokovic, already the winner in their two hard-court finals at Indian Wells and Miami, did the unthinkable and beat Nadal not once but twice in the finals of clay-court Masters: Madrid and Rome. And Djokovic would go on to beat the Spaniard in three more finals, all of them Grand Slams.

Come the clay of 2012, Djokovic decided to throw down the gauntlet even earlier by entering the draw in Monte Carlo, the undisputed kingdom of Nadal since 2005. And sure enough, the two men beat a path to their eighth straight meeting in a final.

Yet ahead of the match, neither would claim the higher ground, both deferring to the other about their chances.

For Djokovic, his opponent posed “the ultimate challenge on clay”.

Nadal, for his part, referred to his seven straight losses in that sequence of finals: “That’s the only positive thing about losing seven times…You go to the match knowing that the normal thing is lose.”

Both, of course, downplayed the reality, for both had every right to think they could win: Djokovic because of his success over Nadal in 2011 and, more recently, in the Australian Open final; Nadal because of his record on clay and against all-comers in Monte Carlo.

They both had longer-term incentives, too. Early dominance over his major clay rival at the start of the season would boost Djokovic’s hopes of claiming a very special record at the French Open: all four Grand Slams at one time. Nadal needed to reassert his dominance on clay to boost his confidence ahead of the biggest summer tennis schedule for years.

Djokovic’s preparations, however, suffered an unforeseen blow—the death of his grandfather—and his subsequent wins, dropping sets to Alex Dolgopolov and Tomas Berdych, looked subdued and erratic.

Within the first minutes of the final, too, that same lack of focus was on show. Djokovic held serve in the first game but in the third, a couple of wayward backhands gave Nadal an early break point and another error conceded it.

In the seventh, it was a similar story. Two poor backhands hit wide gave Nadal break point, though this time Djokovic resisted, holding with his first drop-shot winner.

But Nadal had a real determination about him. The part of his game that has seen the most improvement in the last year or so, his serve, fired better than it had all week: heavy, deep and accurate. His delivery down the centre line was particularly potent, while his wide delivery had a kick like a mule. By the time he reached 5-3, he had lost just two points out of 16 first serves.

Djokovic was picking up barely half the points on his first serve—and had made twice as many unforced errors as his opponent. He faced two more break points and conceded the set, 6-3, with a wide backhand.

In the second set, Djokovic was soon fire-fighting again on his first service game. A ninth backhand error gave Nadal a break point and a 10th confirmed the break.

Worse followed. In the next game, backhand error No11 took Djokovic to 0-15, a forehand into the net 0-30, a netted backhand 0-40 and a netted forehand gave a love service game to Nadal.

Djokovic’s body language spoke volumes: There was no heart for the match or the battle. Despite occasional flashes of brilliance—an acute off-forehand winner in the fourth game to win only his fourth point of the set—he seemed unable to summon up the usual fire.

Meanwhile, Nadal rose to another gear in some of the more extended rallies, and his forehand found its full power and depth to create angles and hit lines at will. He broke again for a 4-0 lead.

Then out of the blue, a string of errors from Nadal handed the Serb a break for his first game of the set. The glimmer of hope was quickly snuffed out, though, and Djokovic was broken back to love.

The Serb looked, quite simply, emotionally empty. An error off his forehand brought up match point and Nadal made no mistake: He took game, set and title with his first ace of the set.

In the end, then, it was not the contest that most had anticipated. Over in an hour and a quarter—a sprint by Nadal-on-clay standards—it boasted statistics from Djokovic that could themselves go down in the record books. He won not a single point on his first serve in the second set, and only 10 out of 34 points in total. Never has he won so few games against Nadal in their 31 meetings.

No wonder he said afterwards: “I’m sorry for my performance: Rafa played well and deserved to win today.”

Djokovic will, no doubt, bounce back from this lack-lustre showing as he comes to terms with the loss of his grandfather. And Nadal will, no doubt, be ready for a tougher battle when they next meet—possibly in a repeat of their Madrid Masters final.

Before that, the king of clay can head off to his homeland, and the defence of his next clay title in Barcelona, with a spring in his step and a place in several record books.