Monte Carlo Masters 2013: Can anyone stop Rafael Nadal as the clay-court specialist eyes up a ninth title in Monaco? 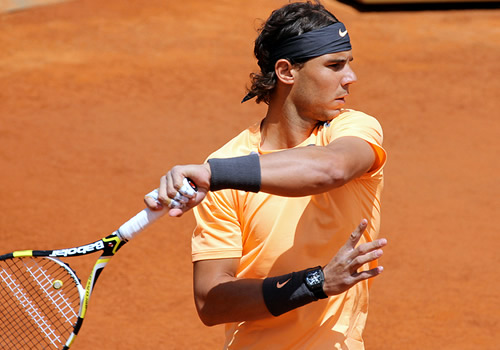 April may bring its showers but it also brings the first hint of summer to a sun-deprived Europe eager for the warmth that the terracotta clay season promises.

Until now, the tennis of 2013 has been dominated by the gruelling hard courts and punishing temperatures of Australia and the Middle East, of California’s desert and Florida’s sub-tropical Keys. It has seen the first Grand Slam and the first two Masters punctuated by a quartet of 500s that offered just brief sojourns indoors or on South America’s clay.

But now, a new colour, and with it a new mood, is spreading across the tennis calendar. Between the start of April and the beginning of June, tennis plays its longest, unbroken swing on a single surface and, from this week onwards, the longest period in a single region: Europe. From here on, it is one long golden run towards the clay climax of the French Open.

Yet while the players enjoy fewer time zones and the regular sleep patterns that come from this constancy, it is a where much can be both gained and lost—the only one to feature three Masters in the space of a month.

It is also the time and the place that boasts perhaps tennis’s most dominant presence, and this year, as in most European springs of the last decade, the question is the same: can anyone deny Rafael Nadal?

The Monte Carlo tournament is played out on burnt-orange terraces with unparalleled views across pine-clad cliffs towards the inky blue depths of the Med. There is probably no more stunning location on the tennis circuit—and it has seen probably no more impressive run than Nadal’s.

The remarkable Spaniard has a 44-1 record at the Monte Carlo Country Club, with his only defeat coming as a 16-year-old on his debut in 2003. He did not play in 2004, but since his return in 2005, he has won eight back-to-back titles.

But this year, for the first time since 2005, he plays in Monte Carlo ranked outside the top four. And it seemed, when he returned to the tour after seven months away with knee problems, that this may be the year he would struggle to defend his astonishing clay record, and certainly struggle to defend the run of 2012 titles that began in Monte Carlo and concluded with the French Open title.

Yet despite an apparently tentative return to clay in South American in February, losing the final of Vina del Mar to the 73-ranked Horacio Zeballos, he has not lost a match since.

He may come to Monaco ranked No5, but he also comes with three straight titles and a 17-1 record on the year.

Monte Carlo, the only non-compulsory Masters of the year, has also attracted many other big names. Even without No 3 Roger Federer—opting to open his clay season in Madrid—and No4 David Ferrer—absent due to an injury picked up in his debilitating Miami final against Andy Murray—there are eight of the top 10 in contention.

Yet still the question remains the same: Can anyone halt Nadal’s march to his ninth Monte Carlo crown and his 23rd Masters title—especially as he targets a top-four ranking in time for French Open?

World No1 and top seed Novak Djokovic had fans a waiting nervously for news of the ankle injury he sustained in last weekend’s Davis Cup tie. His subsequent MRI scan showed no major damage and, a resident of Monte Carlo, he has been back practising on what are, in fact, his local courts.

On Saturday, he also took part in a mini-tennis exho with Murray outside the Hotel de Paris and the city’s famous casino, so on the fitness front, all looks well. On the draw front, he will be thankful that Nadal fell in the opposite half, too, but there are some early challenges to test his ankle before his scheduled re-run of last year’s final.

Djokovic could open against the No26-ranked Mikhail Youzhny, before one of a variety of tricky players. A stand-out of the first round is between Ernests Gulbis—who made a hard-court surge in North America before scoring two useful wins on Monaco’s clay in last week’s Davis Cup tie—and John Isner.

The winner will face either Juan Monaco—enjoying a welcome return to some clay form in Houston this week—or the No32-ranked Martin Klizan. As luck would have it, Isner and Monaco play each other for a place in the Houston final.

The other section of this quarter is even more intriguing, with Milos Raonic one of a strong quartet comprising Julien Benneteau, Jarkko Nieminen and Viktor Troicki—and stats show little to choose between them. The survivor is lined up to meet No5 seed Juan Martin del Potro, though the Argentine first plays the survivor between Bernard Tomic and Alexandr Dolgopolov.

Del Potro has played a strong season so far, beating Murray and Djokovic in Indian Wells before running out of steam against Nadal in the final. Well rested after a first-round loss in Miami, he is favourite to reach a third 2013 meeting with Djokovic—and they stand at a win apiece. It could all come down to fitness: the Djokovic ankle versus the del Potro elbow.

With Ferrer’s withdrawal, Tomas Berdych has gained his own quarter in Monte Carlo, and it’s not a bad one for the big Czech who is on a 21-6 run this season, including two finals.

His main challenge may be the surface itself: Clay is not the best for his power game and his first matches are likely to be against stronger clay opponents—Marcel Granollers and No15 seed Andreas Seppi. But it is his quarter-final opponent who may ring alarm bells. Richard Gasquet’s 2013 form has taken him back inside the top 10, and through Berdych in easy style in the Miami quarters. The win took the Frenchman to a 5-3 advantage over the Czech, and a 21-5 run this year that includes two titles.

Gasquet has some talented players before a possible Berdych rematch—Benoit Paire, Jerzy Janowicz, Kevin Anderson—a finalist in Casablanca—and, his most likely third-round opponent, a first-time meeting against Marin Cilic. But Gasquet’s prowess on clay, and so close to home, could see him make the run to the semis.

Defending champion Nadal, as No3 seed, will certainly have to win the title this year the hard way, as he looks destined to face the top two seeds back-to-back: Murray in the semis and Djokovic in the final.

Before that, it’s hard to see anyone interrupting the Spanish flow. Rested after pulling out of Miami, he practised hard at the Monte Carlo Country Club before doing the honours at the Saturday draw ceremony. He will certainly not be fazed by his most likely opening opponent, fellow Spaniard Fernando Verdasco in a rematch of the 2010 final: Then, Nadal dropped just one game.

Nadal is lined up to meet No16 seed Philipp Kohlschreiber in the third round, though the German’s recent form suggests he may struggle to beat first Thomaz Bellucci and then the 25-ranked Jeremy Chardy.

The other half of this quarter is harder to call. It is topped by No8 seed Janko Tipsarevic, whose form has been variable—and he finds the fast-improving Grigor Dimitrov as a possible first opponent. The next seed is No11 Gilles Simon who, on their past record, may well beat Tipsarevic, just as he did in Miami last month. But neither man has had much joy against Nadal—one win, for Simon, back in 2008.

No2 seed Murray heads up the bottom half of the draw but his hopes of reaching his first final on clay look destined to be dashed again—and by the same man who ended his runs in the Monte Carlo semis in 2009 and 2011: Nadal.

Murray may be lifted, though, by the knowledge that he took the Spaniard to three sets in that 2011 meeting, and he comes to Monte Carlo on the back of a hard-won title in Miami that brought even the super-fit Ferrer to his knees.

Murray has had a couple of tough encounters with his likely first opponent, Robin Haase, though the Dutchman made four consecutive first-round exits until this week in Casablanca. Murray has also been tested by his first seeded opponent, Stan Wawrinka, a semi-finalist in Casablanca. However, the Swiss has the unpredictable talent of Gael Monfils plus the in-form Denis Istomin in his opening rounds.

Murray’s quarter-final opponent will be a stiff test even before Nadal: Jo-Wilfried Tsonga will have to fend off the strong clay reputation of No10 seed, Nicolas Almagro, a semi-finalist in Houston this week, for a chance to challenge Murray for the first time on clay.

Murray should survive, but his 5-13 head to head against Nadal does not bode well for his progress beyond the semis, especially on this surface and against the Nadal record.