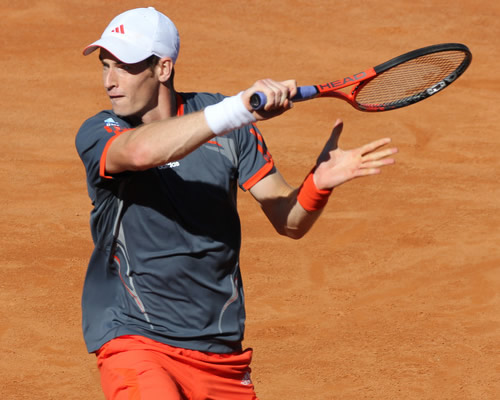 If the first days of main-draw competition in the lavish setting of the Monte Carlo Rolex Masters were about those men targeting the heights, the third day—a glorious, sun-drenched Wednesday—was about the targets of those already at the top.

Tuesday, in particular, saw many pretenders to the top ranks build on their top-12 platforms.

No5 seed Juan Martin del Potro had a tough opener against the unpredictable and often brilliant Alexandr Dolgopolov. The Argentine came to Monaco with some of his best form since returning to the tour from wrist surgery in 2010: the Rotterdam title and the Indian Wells final, where he beat Andy Murray and Novak Djokovic back-to-back before losing to Rafael Nadal.

Del Potro took time out after losing early in Miami, and looked sluggish in the first set against Dolgopolov, who hit a purple patch from the very first point to take the lead, 6-1.

Gradually, though, del Potro worked himself into form to win the match, and so continues to apply pressure to Czech Thomas Berdych, ranked just above him at No6. Del Potro may struggle to press towards his career high No4 on the clay but may well do so with the approach of the US Open Series.

No6 seed Jo-Wilfried Tsonga also had a difficult opener, facing former world No3 Nikolay Davydenko, but he too brought some good form with him to Monte Carlo—a 16-5 season run and the Marseille title.

Now under the guiding hand of Roger Rasheed, Tsonga looked fit and confident, and with a first set tie-break in the bag, he showed real flair on perhaps his least liked surface to race to a 6-2 win.

For No7 seed Richard Gasquet, the scenario was similar: He too has enjoyed a great start to 2013, one of four players with 20 or more wins and one of five with at least two titles. The 26-year-old first reached No7 almost six years ago and is back at his highest ranking, No9, in five years.

By beating Benoit Paire, Gasquet set up a meeting against No9 seed Marin Cilic, yet another man closing in on his previous-best ranking of three years ago. He made unexpectedly quick progress via the in-form Kevin Anderson, 6-2, 6-3.

But on a star-packed Wednesday, all eyes were on the tennis—and the storylines—of the top three men: defending champion Nadal, world No1 Djokovic, and a Murray who, for the first time, is at both No2 and ahead of Roger Federer.

The biggest question surrounding Djokovic was whether he would play at all after he sustained an ankle sprain in Davis Cup competition last week. Not until Tuesday did the confirmation come, but the ‘home’ support on Court Central was keen to see just how far his not insignificant opening opponent, Mikhail Youzhny, would push him.

For while Djokovic, twice a finalist in Monte Carlo, was in no danger of losing his top ranking—nor could be for some time—he has made no secret of wanting to build a strong clay swing into the French Open, where the title would complete his career Grand Slam.

For Nadal, the undoubted master of Monte Carlo, the only question seemed to be whether he could win an unprecedented ninth title here in a row. But currently ranked No5 in the world, his own eye was surely also looking towards the French Open—and his hope of the No4 seeding before the draw was made.

As for the most recent Masters titlist, in Miami, Murray was keen both to hold on to his newly-won No2 ranking and to prove his increasing prowess on clay. To stay ahead of Federer, he needed to reach the quarter-finals.

The first of the trio to stand tall was Nadal, well rested after winning three titles from four finals—the last of them in Indian Wells—and doing so a seven-month injury absence.

He arrived early at the Monte Carlo Country Club on this particular Wednesday for a long practice session before his opening match against Marinko Matocevic—though if anyone could afford to miss a practice on these courts, it was Nadal.

He asserted his dominance right from the start, allowing Matocevic just two points in the opening three games. In the blink of an eye, he had the first set, 6-1, dropping just one point on serve.

Matocevic stepped it up at the start of the second set, breaking Nadal in the first game and holding for a 2-0 lead. That, however, would be his last game. The Spaniard raced through to a one-hour, 6-2 conclusion that extended Nadal’s unbeaten run in Monaco to 43 matches and his Open era win-loss record on clay to 267-20.

After Nadal came Djokovic against Youzhny, and the top seed began very gingerly. The variety of the Youzhny game is always a challenge, especially when he gets to the net for a textbook sliced volley put-away. He broke Djokovic immediately, and then did so a second time to lead 4-0.

Djokovic appeared to be avoiding any impact on his injured ankle and that affected both serve and backhand. But once he got into the rallies—and chased down a drop-shot-lob combo to make a winning return—his game began to look more fluid and confident. He held serve, broke Youzhny, and forced the Russian to serve for the set at 5-4.

It was no little cause for celebration from Youzhny when he held to take a set lead, but he was on precarious ground.

Sure enough, with his body now moving like a well-oiled machine, Djokovic tested his ankle to pick up numerous drop shots and raised his serving level from 50 to 70 percent. He broke to take a 4-1 lead in the second set, levelling on points for the first time, and went on to take the set, 6-1.

With the momentum fully behind Djokovic, a break in the first game of the third looked conclusive, but Youzhny, playing so well throughout, broke back and then held serve in a long, high-quality seventh game. In the end, though, the constancy of Djokovic brought another break and he served out the match, 6-4.

The No4 seed Berdych, who also survived a testing opener, put into words what Djokovic surely felt: “Always the first matches are kind of tough: If you get an opponent like Marcel [Granollers], it is even tougher.”

Both men, though, advance to the third round and remain on track for a semi face-off.

It was left to Murray to close out Wednesday’s proceedings against qualifier Edouard Roger-Vasselin, and the score-line in the first set suggested it was a very easy first half hour for the Briton. Yet the Frenchman made Murray work hard with some deft drop shots and nimble movement. Even so, the Briton reeled off four return-of-serve winners in the second game, and broke again for a 4-0 lead.

Roger-Vasselin did break back in the fifth, and had more break chances, too, but Murray’s speed of return forced another break and he served out to love, 6-1.

Murray was only serving at 50 percent thus far, but had dropped only one point on that first delivery. He went on to break in the third game of the second set, quashed a break point in the sixth after some inspired net play by the Frenchman, and served out the match, 6-4.

He put together a very neat set of stats in the process: 26 winners to 16 errors, though he will want to improve on his first-serve percentage when he meets No13 seed, Stan Wawrinka, who has caused Murray a few problems in the past.

But should Murray beat the Swiss, he will notch up his 400th career win and consolidate his No2 ranking—and that would be a pretty decent day’s work.