Monte Carlo Masters 2013: Andy Murray crashes out in the third round after a straight-sets defeat by Stanislas Wawrinka 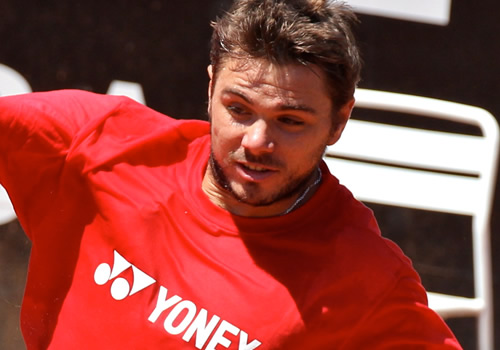 It was a big third-round line-up on Court Central on yet another sun-kissed day on the Med at the Monte-Carlo Rolex Masters.

The appetiser came courtesy of a home favourite, the No6 seed Frenchman Jo-Wilfried Tsonga—for the Monte Carlo Country Club sits on the French side of the Monaco border—and he did not disappoint. In the fastest match of the day, he beat Jurgen Melzer in only 57.5 minutes, inflicting a bagel on the hapless Austrian in the second and concluding set.

The fish course was a tasty morsel of a match-up between Monte Carlo’s undisputed king, the eight-time and defending champion, Rafael Nadal, and the elegant and oft-time superlative skills of No16 seed Philipp Kohlschreiber. The German scored his only victory over Nadal the last time they met—but that was on the grass of Halle and just before Nadal left the tour to heal his knees.

This time the Spaniard, looking appropriately Mediterranean in flame-red bandana, brushed aside the German with almost as much ease as the end-of-set sweepers flicked the terracotta grit from the court’s white lines.

Both had looked in prime form on their way to this 13th meeting: Murray dropped just five games against Edouard Roger-Vasselin while Wawrinka dropped only two in beating the clay-court specialist, Albert Montanes. And the Swiss man had enjoyed some success against Murray before, not least in a bellicose win in four sets at the US Open in 2010—and most of their three-setters had gone the full distance.

The match was made all the more tasty by a couple of other factors: If Murray won, it would mark his 400th on the tour; if Wawrinka won, his friend and compatriot Roger Federer would reclaim the No2 ranking. And in another nice little twist, Monte Carlo 2009 marked his best result, the semis—the only time in 14 matches that Wawrinka has beaten Federer. Perhaps he would rise to a timely challenge in the same round exactly four years later.

It was Murray who first looked ready to take the match by the horns, though, earning break points in the second game. He failed to convert them and suddenly faced 15-40 himself in the third game. Sure enough, Wawrinka snatched his chance.

The Swiss man is rightly renowned for his great jack-hammer of a single-handed backhand, a beautifully shaped shot that is capable of outright winners both down the line and across court. Time and again, it opened up the Murray court, sometimes for a forehand put-away, sometimes allowing him to ghost into the net for a volley winner.

Wawrinka was, without doubt, finding a purple patch, and the longer it went on, the calmer and more assured he looked. The longer it went on, in contrast, the more lack-lustre Murray looked. The errors piled up as he scored just two points from nine second serves. Where a double fault conceded the Murray break, Wawrinka held serve with an ace and, for good measure, broke again courtesy of a double fault and three netted ground strokes from Murray.

The Swiss man led, 6-1, and has rarely looked more composed. Little wonder: He had 11 winners to Murray’s two, and 10 errors to Murray’s 14. And he was not done.

The Wawrinka serve went from good to great. His opening game took 54 seconds, his second little more, and by his third, he had dropped just one point on serve. Murray, though, continued to look vulnerable, facing a break point in the fourth game and another in the sixth. The Briton is one of the best movers and defenders in the game, but his opponent was out-performing him even from the baseline. A forehand down-the-line winner—the equal to any of his backhands—earned Wawrinka a break opportunity and an over-long volley from Murray brought the break.

Wawrinka did not waver, holding cleanly for a 5-2 lead, and Murray looked as though he could not wait to get off the court. By now, the packed stands were clearly expecting more resistance from the No2 seed, and when they didn’t get it—Wawrinka broke again to take set and match 6-2—they cheered the Swiss man as one, pausing only to jeer the retreating back of Murray.

While 58 minutes may not constitute a heavyweight lunch, Wawrinka ensured there were enough tasty moments to satisfy the Monte Carlo appetite.

A balance of 23 winners against six errors is, by any standard, a fine display, even though Murray’s reverse statistics, seven compared with 24 errors, was poor. He was certainly less than happy: “When I started making a lot of errors, I started hitting the ball shorter and he was able to dictate all the points from there…Sometimes it happens—you’re not quite feeling the ball. It’s disappointing: no-one wants to lose matches like that.”

He’s not wrong, especially when it loses him the No2 ranking—temporarily at least—and postpones reaching that 400-match target.

So the two men who each took under 60 minutes to reach the quarters will now face one another: Wawrinka and Tsonga. And on the basis of their form today, it should be a splendid contest.

The other quarter-final match-up in the bottom half also has the hallmarks of a fine display. At precisely the time Nadal was celebrating his win over Kohlschreiber, his next opponent, the equally charismatic rising star from Bulgaria, Grigor Dimitrov, continued to delight the Monaco faithful with a 67-minute win in an identical score, 6-2, 6-4, over Florian Mayer.

The young Dimitrov and his all-court skills will nevertheless have to cope with that swerving, high-bouncing delivery from the left-arm of Nadal: the Spaniard has—very famously—scored heavily against the similar single-handed backhand of Federer.

The biggest upset of the day came in the top half of the draw, where Italy’s Fabio Fognini, at a career-high ranking of 32, beat the No4 seed Tomas Berdych with relative ease, 6-4, 6-2. Fognini has shown growing form this season, especially on clay. He reached the semis in Acapulco, beating Wawrinka along the way and taking Ferrer to three sets in the semis.

He next faces world No9 Richard Gasquet, also close to the kind of form that took him to No7 almost six years ago. The Frenchman beat the strong challenge of Marin Cilic, ranked just two places below him, 7-5, 6-4.

Gasquet and Fognini will fight for the unenviable task of a semi against the last man standing in the quarter topped by Djokovic, who fended off a strong challenge from Juan Monaco, in three sets, and Jarkko Nieminen, who beat Juan Martin del Potro to reach his first Masters quarter-final since 2006.