Monte Carlo Masters 2013: Rafael Nadal battles back to beat Grigor Dimitrov and book his place in the semi-finals 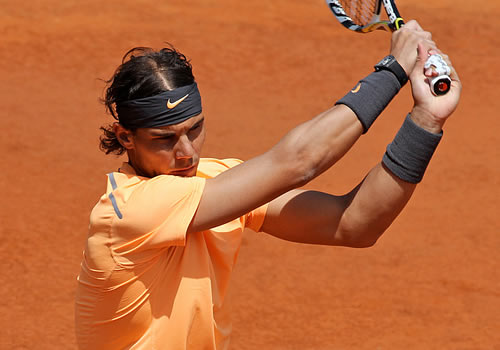 Rafael Nadal is currently ranked No5 in the world Photo: Marianne Bevis

Rafael Nadal believes that his never-say-die attitude proved decisive as the Spaniard survived a scare against Grigor Dimitrov to book his place in the Monte Carlo Masters semi-finals.

Nadal was forced two withstand a second-set fightback from Dimitrov as the world No5 battled to a 6-2 2-6 6-4 win and extended his unbeaten run in Monte Carlo to a staggering 45 matches.

“I know that when you have these tough matches, it is decisive to keep fighting,” said the 26-year-old Nadal, who will face Jo-Wilfried Tsonga in the last four.

“If you keep fighting, you will lose some ones, but you will have a chance to win a lot of ones, too.

“I gave that fight. Finally he had his chance, and I had my one, and I converted. That’s it. I think I played better the last couple of games.

“Obviously I’m trying to find better rhythm all the time. In my opinion, I did it in the end. It was great.”

Dimitrov, 21, insisted he gave it his all and hailed the “extraordinary” Nadal as the Spaniard goes in search of a ninth consecutive title in Monte Carlo.

“It’s a tough loss,” said Dimitrov. “Of course, I think I gave everything I had today. I must say, all the credit to him. He’s an extraordinary player, extraordinary fighter.

“Today he obviously showed why he’s the best not only on that surface, I believe, but he’s one of the best out there.”

Fabio Fognini will face either Novak Djokovic or Jarkko Nieminen in the last four after the Italian knocked out Richard Gasquet of France in straight sets 7-6 6-2.