Monte Carlo Masters 2013: Novak Djokovic and Rafael Nadal will battle it out for the Monaco crown after reaching the final 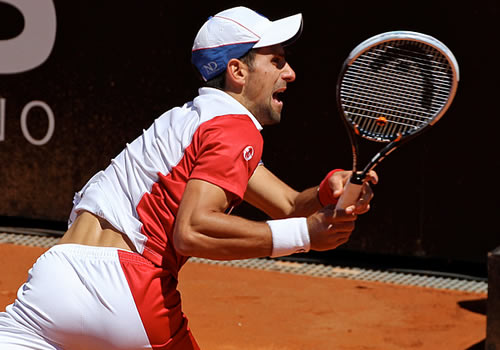 It was a day of overcast skies and chilly breezes at the Mediterranean venue so used to sun, sea, sand—and brilliant orange tennis courts.

But the Monte Carlo faithful, including Prince Albert of Monaco himself, were not deterred from packing the elegant terraces around Court Central. They did, after all, have two of the biggest names in tennis at their feet, one of them the world No1, Novak Djokovic, the other their eight-time champion, Rafael Nadal.

Perhaps it was the expectation that Djokovic and Nadal would sail to a repeat of last year’s final, or simply that the fans at Monte Carlo love nothing better than some exuberant flair in their players. Whatever the reason, they certainly gave their encouragement to the underdogs.

In Nadal’s case, the opponent came in the shape of Frenchman Jo-Wilfried Tsonga, as good as a home player in the tennis club that straddles the Monaco-France border. In reaching his semi, he had also shown every bit of his all-court skill and personality—skipping into the net for touch volleys worthy of another era to beat a sequence of strong opponents, most recently the in-form Stan Wawrinka.

What’s more, he had split the last four matches against Nadal—and five of their seven best-of-three matches had gone the full distance. Perhaps young Grigor Dimitrov had taken enough out of Nadal and his knees the previous day to open the door for the equally charismatic Tsonga.

Against Djokovic, the flair came in the shape of Italian Fabio Fognini, and with the Italy border just 10 miles down the road, this challenger too was supported like a native.

In terms of underdog status, Fognini had it all. He may have been born just two days after Djokovic, but he appeared to have little else in common with the top seed. Against 36 career titles, Fognini had none, and out of four previous meetings, he had won none. Yet their last two matches—at the London Olympics and in Indian Wells this year—had gone the full distance.

The flamboyant, roguish Italian was also showing all the signs of late blooming, ranked at a career-high 32 but set to rise to 25 on the back of this, his first ever Masters semi-final. The clay form that took him to the Acapulco semis had brought him some big scalps in Monte Carlo: Tomas Berdych and Richard Gasquet. He was certainly in form—and Djokovic had been forced to fight back from a set down in two previous matches.

In the event—and unfortunately for Fognini—Djokovic was on his way back to his best form after starting the tournament a little tentatively. The ankle strain sustained in Davis Cup was getting better with each round and he cruised through his quarter-final in an hour and a quarter. By the time he took to the deep orange, cloud-darkened Court Central, he had his swagger back.

Within 28 minutes, he had subdued the occasional shots of brilliance from Fognini by breaking in the second game and again in the eighth to take the opening set, 6-2.

The Serb’s tennis was solid, resilient and smart. He made only four winners but he also made only four errors, was moving with ease and flexibility, threw in a few winning drop shots and stole the net position often enough to thwart Fognini’s own serve-and-volley moves.

With the first set over so quickly, the gap in the two men’s confidence grew even wider. Djokovic began the second set just as in the first, breaking straight away, holding to love for a 3-0 lead breaking easily again in the sixth. He served out the set, and match, 6-1, in a mere 24 minutes.

Djokovic made just six errors in the match, and his smile at his box said it all: ‘I’m feeling good.’

Fognini will have to banish the jeers that accompanied his departure from Monte Carlo—an unfair response to what was a spirited and confidence-boosting run for the Italian. There are few outside the top-10 who would have made much more impression on Djokovic on this occasion, and Fognini should draw satisfaction from now being on track for his first French Open seeding.

Unlike Djokovic, Nadal had sailed through his early matches but then fought for all his worth to survive one of his biggest scares in nine years in Monte Carlo, his quarter-final against Dimitrov. He dropped only his seventh set in scoring his 45th straight win, but at what cost?

He found himself fending off a dangerous Tsonga and three break points in the fourth game of the match but he held, only to come back stronger to break in the fifth, as the Frenchman struggled with his touch in the cool, blustery conditions. Another break in the ninth finished off the set 6-3 and a dominant Nadal raced to a 5-1 lead in the second set.

But now Tsonga, whose self-belief has continued to grow this season under the guiding hand of Roger Rasheed, staged a spirited fight-back that brought this Francophile crowd to its feet. He broke Nadal in the seventh game and then held off three break points—which were also match points—in a seven-minute eighth game to narrow the score to 3-5.

Another gripping game saw Tsonga take a 40-15 lead on Nadal’s serve with two delicate volley winners, only for the Spaniard to fire his first two aces of the match for deuce. But Tsonga stood toe-to-toe in a cross-court exchange to convert a third break point.

Nadal stopped the run of games with a strong hold to lead 6-5 and threatened a decisive break in the 12th, but again Tsonga found some exquisite touch at the net to hold: It would be a tie-break, and the crowd chanted Tsonga’s name in approval.

At such moments, Nadal always seems to dig a little deeper, focus a little harder, strike the ball with more intent. He took a point against the Tsonga serve-and-volley play and forced two fatal backhand errors to steal the match 7-6(3).

Despite the loss, Tsonga showed great optimism in his game and for future Nadal encounters: “I always try to be aggressive when I play him.

“It’s the only way for me. If I stay back, there’s no way I can win… It is better to make it difficult for him like I did today in the end, because then I can think maybe next time, if the conditions are better, I might do better.”

Nadal’s win ensured a blockbuster of a final, a 34th meeting with Djokovic, their 16th final, their 11th in a row. Two of those finals have been here in Monte Carlo, in 2009 and 2012, and they went on to contest the Rome Masters and the French Open last year, too. Nadal won all of them, and they have not met since.

It is, in short, almost as hard to pick a winner as it is to pick who, in this scenario, will be the Monte-Carlo favourite.