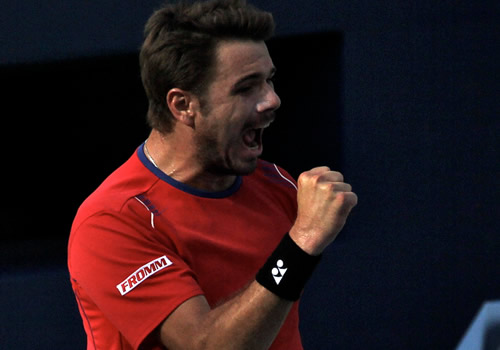 There must be few other professional sports, especially at the elite level represented by the Monte Carlo Masters this week, where the last two standing—rivals fighting for a share of over £500,000 in prize money, 1,600 ranking points and, of course, the kudos of a big title—would spend the night before relaxing together over dinner. Yet that was the plan for Roger Federer and Stan Wawrinka.

For the small matter of a rivalry that separates these two Swiss by just one ranking place and a handful of points, that has been played out over almost a decade by the 32-year-old Federer and 29-year-old Wawrinka, is not about to dent the friendship between the German-Swiss who has topped his country’s sporting leader-board almost since the start of the century and the French-Swiss who has only this year overtaken him.

Only fitting, then, that these two, on their last evening in Monte Carlo, should spend their time together. And just as logical that, the next morning, they should practise together before contesting a title for the first time.

For as Federer commented after beating the defending champion Novak Djokovic to affirm the first all-Swiss final on the main tour in 14 years: “I have no problems warming up with Stan. I will relax tonight and have dinner with him.”

And yet there is more at stake than just prize money and ranking points.

Federer, with 21 Masters titles to his name, has reached the Monte Carlo finals three times before but three times has lost. Victory this time would fill a significant hole in his resume.

What’s more, he has not won a Masters title since the summer of 2012—indeed Cincinnati was the only title of any kind aside from the ATP250 in Halle last summer that he won until Dubai this spring. In the interim, he suffered a tough season of back injury, early and unexpected losses, and a drop to his lowest ranking in 11 years. Winning in Monte Carlo would reaffirm his fitness, form and hunger for the top—and reclaim the top Swiss ranking that Wawrinka seized for the first time with his first Grand Slam victory in January.

As for the impressive Wawrinka, his has been a game long admired not just by Federer but by tennis fans the world over—a compelling mix of power and elegance, an attacking game of strength from the baseline and the net, and boasting perhaps the best single-handed backhand in the game.

He broke the top 10 back in 2008 but could not find the consistency, or perhaps the constant self-belief, to maintain that level. However 2013 proved to be a big year for Wawrinka as well as Federer. The man whose fighting spirit is writ large on his arm—Samuel Beckett’s “Ever tried. Ever failed. No matter. Try again. Fail again. Fail better”—played one of the matches of his career in Melbourne to take defending champion Djokovic to 10-12 in the final set of their fourth-round match. He recruited Magnus Norman as his coach—a partnership that has clearly gelled perfectly—and came close to beating Federer in a superb two-and-a-half hour match at Indian Wells.

“Stan the Man”, as he was now been dubbed, then beat two top-10 players to reach the second Masters final of his career in Madrid, and he reached the semis of the US Open with a stunning run through Tomas Berdych and Andy Murray to lose another five-set classic to Djokovic. By the end of the year, Wawrinka was in his first World Tour Finals, and launched 2014 with his first Grand Slam—this time beating Djokovic, Berdych and Nadal.

Suffice to say, he really did “fail better” until he did not fail at all, winning his first Major, and with it the lead over Federer in the rankings for the first time.

So while Wawrinka may not have beaten Federer too often, just once in 14 meetings, he has undoubtedly closed the confidence gap as well as the ranking gap between them, as evidenced by that Indian Wells encounter, and the three-setter before it in Shanghai. And if he needed any more convincing that Monte Carlo could yield his first Masters title it came in the statistics. His only victory over Federer came in this very tournament in 2009.

This match, then, had the makings of a very special occasion, as Federer admitted:

“This one is clearly very special, especially with the way he’s been playing the past few months, the number of hours we spent together on court either playing doubles or practising, the times we’ve talked tennis. It’s nice living a moment like this together in a final. It’s really wonderful.”

The conditions were less than wonderful in this beautiful corner of the Mediterranean: precious little sun and a cool, damp 13C degrees. Nevertheless, that did not put off the fans. Even Easter Sunday lunch did not delay matters for the tennis faithful.

But whether it was the conditions or the import of the meeting, both men started edgily, taking time to find their pace and range. In the first game, Wawrinka fought off a break point, and in the fourth Federer did the same. By the fifth, the pressure told on Wawrinka and he was broken for the first time in the tournament.

Federer had to defend deuce to consolidate his 4-2 lead, and then 0-30 before holding for 5-3, but he was hitting many more errors than winners: 11 to three. Serving for the set, Federer lost his footing, looked shaken, but held off 30-30 to serve out the set, 6-4.

However, the statistics showed just how precarious the story was for both. Federer had managed only five winners among his 37 points; Wawrinka managed 11 winners in his 35 points but fired 17 errors. Surely whichever of them began to play with their usual aggressive confidence would take control of this closely-balanced contest.

But the early stages of the second set looked much the same: Indeed they exchanged breaks in the second and third games, and Federer fought off two more break points in the fourth.

A brief rain delay, and they continued to serve well below their usual standard and, as they headed to a tie-break, matched one another with 25 errors apiece.

But come the face-off, Wawrinka began at last to unleash the kind of shots that have marked his surge in form since last year. Federer pegged him back from 4-1 to 6-5, but Wawrinka snatched the set on the next point—a margin explained by the swing in winning shots: Wawrinka had 13 to Federer’s 11, but only 10 errors to an even higher tally for Federer than in the first set—18.

Carrying the momentum and confidence of his strong tie-break, the Wawrinka floodgates opened in, ironically, the best passage of play of the match. For “The Man” in full flow demanded a high level of resistance from Federer to try to keep pace. But pinned to the baseline by the depth and speed of the Wawrinka ground-strokes, Federer was unable to pull back two straight breaks. It would be, for only the second time in 15 matches, Wawrinka’s day, 6-2.

Federer will no doubt be happy for his friend’s breakthrough to a first Masters title. But he will, inevitably, be far from happy that he hit almost twice as many errors to winners—and remains stubbornly at No4 in the rankings.

It’s been a long, steady and courageous road to the top for the mildly spoken and modest Wawrinka, but confidence breeds confidence, and with a first Major and Masters in his bag this season, he will now also be a strong contender for the French Open.

But the match ended as it had begun, with two friends enjoying a special occasion. A warm embrace, broad smiles and words of praise for one another, it was, as the great man said, “really wonderful.”