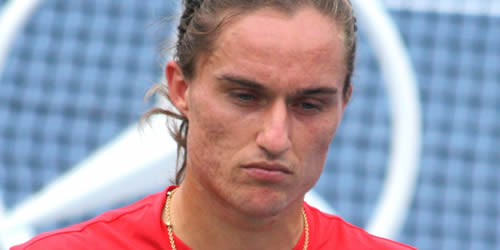 Three days of main draw action have been and gone and the suspense was becoming almost tangible. But finally, on Day Four in Monte Carlo, the two leading men made their appearance on Court Central.

The first of them, Novak Djokovic, has topped the rankings since last summer, currently holds three Grand Slam titles and has won two titles and reached two semis out of four tournaments so far this year.

More significant than those achievements, though, has been the balance of power between him and the undisputed king of Monte Carlo, world No2 Rafael Nadal. In every match since the start of 2011—all finals and all Slams or Masters—Djokovic has held sway, even on the clay of Rome and Madrid.

If the Monte Carlo draw brings them together, as it is destined to do, for their second confrontation this year, it would be the ultimate challenge to Nadal’s clay supremacy: He has been unbeaten in Monte Carlo for seven straight years.

First, though, each had four hurdles to negotiate, beginning on a blustery, light-and-shade Mediterranean afternoon.

Both opened against players ranked in the 40s with a decade or more on the professional tour. But before the Nadal-and-Djokovic show got under way, many eyes turned to another eagerly anticipated meeting between two men tipped for future tennis stardom.

Alexandr Dolgopolov, ranked as high as 13 a year ago, has the kind of fresh style and attitude that captured fans from the moment he broke onto the scene. Now 23, his progress has been erratic—as his tennis can be—yet he has the talent and shot-making to leave the very best rooted to the spot. Last year, he beat David Ferrer on clay and both Jo-Wilfried Tsonga and Robin Soderling at the Australian Open. He also gave Djokovic a shock in one of the best sets of tennis at the US Open last year, which he lost 14-16 in a tiebreak.

In the Ukrainian’s first match, he scored his first main-draw win in three visits to Monte Carlo with an impressive performance against Juan Ignacio Chela, 6-2, 6-2, in under an hour.

Now he was up against the imposing teenager, Bernard Tomic, ranked 36 and also with a strong win over Denis Istomin under his belt—his first main-draw clay win.

Tomic, too, made a name for himself in Grand Slam competition last year, coming through qualifying to reach the quarter-finals at Wimbledon, where he did take a set from Djokovic. But what made his second-round Monte-Carlo match against Dolgopolov particularly intriguing was their last meeting—a five-set thriller at this year’s Australian Open which gave Tomic his first win in their four meetings.

It looked, after the first set, as though Dolgopolov was riding the same wave of form that he had found against Chela. He broke Tomic twice in half an hour with the kind of slice, angle, touch and bounce that has won him so many fans around the world.

The nimble, slight Ukrainian made the 6ft 5in Australian look ponderous as he carved his way through his game like a hot knife through butter. Dolgopolov served at 85 per cent, won 100 per cent of his second serves and made 15 winners to Tomic’s 4 to lead 6-2.

In the second set, however, Tomic began to look more settled and stayed in the cat-and-mouse exchanges long enough to make himself some openings. At times, the tennis was more reminiscent of grass than clay, with corner-to-corner sliced backhands skimming the net and swinging away from the receiver. And that seemed to bring out the best in Tomic, who began to pick off forehand winners with more ease.

In the fourth game, he held serve to love for the first time, and then did so again in the sixth. By eliminating his own errors, he forced more from Dolgopolov—who after four games was already up to eight compared with the seven he hit in the entire first set.

In the seventh game, Tomic earned his first break point. He now looked eager and aggressive but failed to control his return of serve. He failed to convert two more chances, as well, but it was not for want of effort: He watched, helpless, from a seat on the dirt.

The break, though, did come at 5-5, and in the most convincing fashion—to love. The pressure told on the Ukrainian, who started to fire errors in his effort to contain Tomic, and the Australian levelled the match, 7-5.

It is one of the frustrations of the Ukrainian’s game. Breathtaking tennis can segue into error-strewn slumps, and it is never certain how he will respond.

His impetuous side threatened to derail his opening service game in the third set, too, as he rushed the net rather than playing a tactical game. He survived, though, and manipulated two break points against Tomic, but a 20th forehand error snuffed out the chance.

However, the concentration was back and Dolgopolov worked more opportunities in the fourth game, this time making no mistake. That opened the floodgates, and Tomic did not manage another game. Still Dolgopolov, in usual fashion, kept his fans guessing right to the wire, going 0-40 down in his final service game before producing five straight winners to close out the match.

It was entertaining, unpredictable tennis played in great style and spirit by both men. But with 44 winners, 16 of them at the net, Dolgopolov once again showed why his exuberant, if frustrating, tennis is so watchable.

His next match promises to be just as watchable: a replay of that one previous encounter with Djokovic. For yes, as expected, the world No1 did not find too much resistance in Andreas Seppi, winning 6-1, 6-4.

And Nadal began his title defence successfully, though with rather more resistance than he may have anticipated. Jarkko Nieminen, who at 30 won his first title in six years in Sydney in January, gave Nadal a sound test with his left-handed, all-court play before losing 6-4, 6-3. Nadal next faces qualifier Mikhail Kukushkin.

Djokovic’s path to the semis beyond Dolgopolov became a little easier with the unexpected loss of David Ferrer in the second round and the loss of Juan Monaco to injury. Meanwhile, Murray’s route to that same semi also eased a little with Jurgen Melzer’s loss to Julien Benneteau.