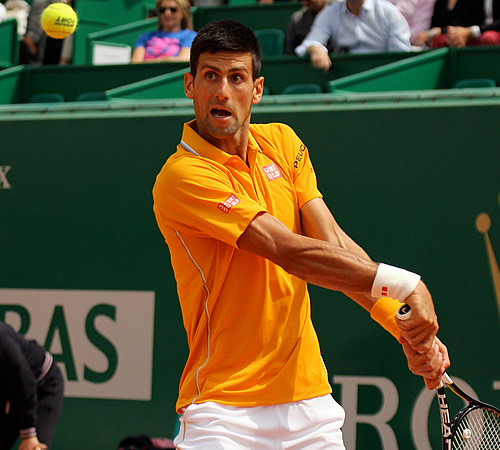 The first clay Masters of the year may have lost last year’s two finalists in the space of two hours on an overcast Thursday—Swiss stars Stan Wawrinka and Roger Federer failed to win a set between them—but there was no reason to feel too down in Monte Carlo.

For it is not a bad day that finds all three reigning Grand Slam champions on the schedule. There are not many, either, that unite two of them on the same court as early as the quarter-finals.

However the last few months in the life of US Open champion Marin Cilic have been riddled with injury. Despite breaking the top eight in the rankings in October, he was forced to withdraw from Valencia and the Paris Masters with a shoulder injury, in the hope of making an impression at his first World Tour Finals. However the injury persisted not just in London but in his involvement in the IPTL and on through the Australian Open.

Not until Indian Wells did Cilic return, only to lose his opener, so in all honesty, his eighth visit to the Monte Carlo Masters did not augur well—especially as he had never before advanced beyond the first round.

But Cilic had looked remarkably relaxed in the Principality. He took the lead in a charity afternoon on opening weekend, and hosted a players’ party at a hotel down the hill, and also tested that shoulder in a couple of tough matches, a three-setter against Florian Mayer, a two-setter over No11 seed Jo-Wilfried Tsonga.

But in his first Monte Carlo quarter-final, the task was about to become a whole lot tougher. He faced the best player in the world, Novak Djokovic, whose form this year dominated the tour with just two losses to 27 wins, and titles at the three biggest events of the year in Australia, Indian Wells and Miami.

To make matters worse, Djokovic had beaten Cilic on all 11 previous occasions. And to double that woe, Djokovic’s prowess here was truly impressive: He reached the semis or better on his last six visits, was runner-up in 2009 and 2012, and won the title in 2013.

If there was chink of light, it was that in his three pre-injury matches against Djokovic last year, Cilic had won the first set in Indian Wells, taken the Serb to four sets on the clay of Roland Garros, and then had him two sets to one down in the Wimbledon quarter-finals.

The two Grand Slam champions were scheduled to play third on an increasingly hot Centre Court, but any idea of a mid-afternoon tussle soon went out of the window after the first match ended, 5-2 to Tomas Berdych, when Milos Raonic retired with a foot injury, and then Gael Monfils continued his blistering form to dismiss Grigor Dimitrov in under and hour.

The Monaco faithful were at least hopeful of a closer match when Djokovic and Cilic, in brilliant orange and lemon respectively, made their appearance at 1pm—however, they were soon disabused.

Cilic struggled to win a point, no matter whether his formidable first serve went in, nor whether he got his forehand into play, nor whether the baseline rallies were long or short. Djokovic had all the answers, on serve, with drop-shots, and of course in his renowned defensive skills.

Cilic would win just nine points in the first 6-0 set, and a supremely confident Djokovic even threw in a net attack on the only break point he faced.

The second set did not start any better, Djokovic making an immediate break and taking a 2-0 lead.

With not a little hint of irony, the crowd cheered Cilic as he struck his first ace of the match and did so again as he broke his duck to get on the scoreboard. Not that he was finding things much easier, and that showed in his serving, which could barely reach 50 percent.

He did well to keep the score ticking over at far as 3-5, and saved two match points before Djokovic’s precise length and angles forced one final error, Cilic’s 27th of the 65-minute match.

So 11 wins became 12 for the almost impregnable Djokovic against Cilic as he reached his seventh straight Monte-Carlo semi-final for the loss of only 12 games.

He would have to await the final match of the day—which got under way at barely turned 2.30pm—to see whether he next faced Rafael Nadal or David Ferrer.

He may relish the former, because he and Nadal shared the honours in their last two matches, both finals, both on clay, both last year. Djokovic won Rome but Nadal retained Roland Garros. With his eyes set so firmly on winning the French Open for the first time, this would be the ideal chance for Djokovic to throw down the gauntlet.

As for Ferrer, he has not beaten Djokovic in their last eight matches, including in that same Rome draw last year.

“It’s probably the biggest clay court challenge you can have, playing against Nadal or Ferrer,” said Djokovic afterwards. “Both of these guys have so much success on this surface, especially Rafa, this tournament in particular.

“I got to prepare myself mentally for that. Other than the mental part, I think physically I’m ready. I’m not exhausted. I haven’t spent too much time on the court. Also I’m feeling the ball really well. Hopefully I can perform well.”

But the compact, 33-year-old No5 seed had beaten Nadal at this very tournament at this very stage last year. Could he do it again?