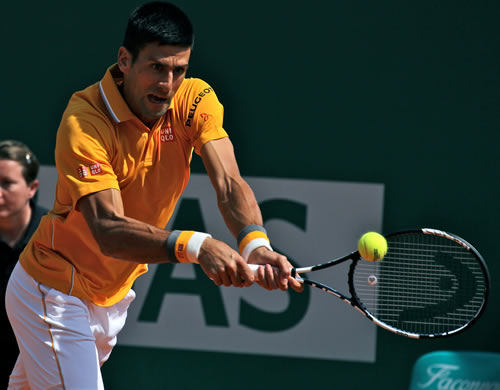 Novak Djokovic continued his 2015 winning ways as he transitioned straight to clay from his Indian Wells-Miami double with consummate ease.

The 2013 Monte-Carlo champion and world No1 took just 86 minutes to slide past qualifier Albert Ramos-Vinolas, 6-1, 6-4, becoming the first man to take his place in the third round of the year’s first Masters tournament on the red stuff.

Djokovic began his week in the sunny Principality that he calls home in some style, overtaking Rafael Nadal on the list for most weeks at No1, the consequence of a blistering start to the season that has claimed a fifth Australian Open title and winning the big Masters double for the third time. And this first win on clay takes him to a 26-2 run.

Not that Djokovic is any stranger to winning matches on the most scenic courts in Europe. In this his ninth visit to Monte Carlo in 10 years, he has reached the semi-finals or better in his past six appearances, and he is also a three-time champion at the Rome Masters.

On a warm Tuesday afternoon, he stormed to a 4-0 lead against a man initially gripped by nerves, but a wayward service game by Djokovic handed Ramos-Vinolas a break back, though that would be the Spaniard’s only game of the set.

The second set was far more competitive as the two went toe-to-toe through an eight-and-a-half minute game held, eventually, with the help of a couple of classy off-forehand winners from the left-handed Spaniard onto Djokovic’s sidelines.

Then came a long delay of seven minutes while the players waited for the court to be dampened down to contain some slippery patches, and on the restart, Djokovic won three straight games to lead 5-3. He finished off the match with a love hold, 24 winners to seven from Ramos-Vinolas, and an impressive 11 points won from 14 at the net.

Djokovic was, understandably, very content with his performance. It is always a challenge to make the quick switch from hard to clay, and the Serb had to do so faster than most: He played the Miami final little more than a week ago, several time zones away.

“I felt very good. I thought, considering the amount of months that I haven’t played on the clay courts, to play against somebody that is a clay court specialist, and win in two sets, I thought it was a very good performance.

“I can just take positives from today. Maybe the beginning of the second, there were a few games where I did drop a little bit with intensity and concentration. But overall was a high quality performance and I’m happy for that.”

If Djokovic goes on to win the title, he has a couple of fresh milestones to add to the weeks held at No1: He could, for example, become the first man to win the first three Masters of the season back-to-back. But he stressed that such statistics do not over-occupy him.

“Well, there’s always every week something new. I don’t think about all the possible records or milestones that I’m able to achieve. Of course, the fact that I think I’m sixth on the all time list of weeks spent at No1, of course it’s an incredible achievement. I’m very proud of it.

“But, you know, the kind of mindset that brought me to where I am right now is a mindset of a player that is very committed, dedicated, disciplined, very much in the present moment. I don’t want to take my thoughts too far ahead because then I’ll lose the necessary focus that actually keeps me where I am.”

The next highest seed in this quarter is US Open champion, Marin Cilic, who played and lost his first match of the year in Indian Wells last month. He beat Florian Mayer, 6-3, 3-6, 6-3, hitting 43 winners in one hour, 40 minutes, and goes on to face the winner between Jo-Wilfried Tsonga and David Goffin.