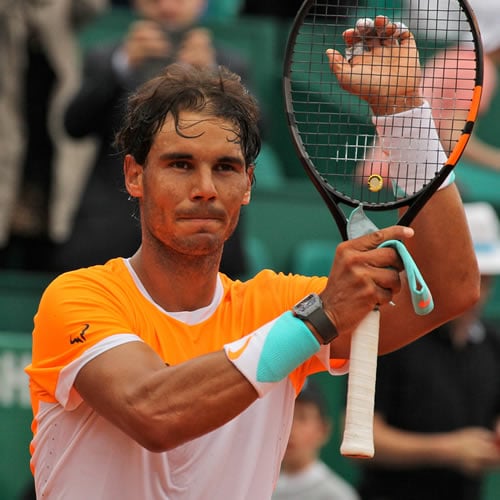 There are few places where Rafael Nadal looks more at home on a tennis court than on the terraces of the Monte Carlo Country Club.

Even with overcast skies, and some dampness in the air, there seems little that can put the eight-time champion off his stride here.

At least that has been the received wisdom, except that Nadal has not won the first clay Masters tournament of the season for the last two years. Novak Djokovic beat him in the title match in 2013—perhaps not too much of a shock—but last year, David Ferrer caused an upset in the quarter-finals, the first time he had beaten his illustrious compatriot on clay in a decade.

And after months away with injury last year, and a slow return to form this year with just one title, the 250 in Buenos Aires, Nadal has lacked a little confidence.

However, as he said when he arrived in Monte Carlo, he is now entering the phase of the year that he loves the best, the one he has dominated for a decade.

Nadal started his campaign with a formidable 50-3 record on Monaco’s red dirt, and he sailed with ease to 51 wins via French wild card Lucas Pouille.

But his next opponent was an altogether tougher prospect, the tall, big serving No15 seed John Isner. The American had caused Nadal a few problems in the past, and notably on the clay of Roland Garros in 2011, where Nadal had to come back from two sets to one down.

However, Monte Carlo had not been a happy hunting ground for Isner. This was only his second appearance for the man who turns 30 in a fortnight, and his first match-wins came in his openers this year over Steve Johnson and Viktor Troicki. He did, though, rediscover some form to reach the semis in Miami with wins over Kei Nishikori and Milos Raonic.

But on clay, in Monte Carlo, against Nadal, his time was up—though he made a bold challenge. Isner had two set points in the opening tie-break, leading Nadal 6-4, only to miss some first serves and get pinned to the baseline, and Nadal punished him to seal the set, 7-6(6).

But Isner came back strongly in the second set, recovered from 0-40 on serve to hold, then broke and served out the set, 6-4.

Nadal finally broke a flagging Isner in the third set and held for a 4-1 lead, eventually closing out the match, 6-3, after 2hrs 20mins.

The former champion was pleased with the victory, but especially so because of his recent record in three-set matches.

“After the way that I play, I lost the second [set] having 0 40 for 5 3, then lose 6 4, was little bit painful. But very important the way I played the third. My mentality I think [was] very positive… Very important result for me.”

The big test of that confidence lies in his next match, a repeat of last year’s meet with Ferrer at the same quarter-final stage.

The feisty, evergreen 33-year-old Ferrer showed all his commitment and physical fight to beat the equally durable Frenchman Gilles Simon, in a 2hr 33min battle that kept the crowds packed into the Court des Princes long after dusk had fallen.

Ferrer led by a set and a break, only to see Simon fight back and take the second set in a tie-break. The Spaniard got an early break in the third but had to fight long and hard to hold his next serve. That done, he ran away from a weary Simon, 6-2, 6-7(3), 6-1. No doubt Nadal, though, has high hopes of reversing last year’s result.

World No1 Djokovic beat Andreas Haider-Maurer, the only unseeded player among the last 16, 6-4, 6-0. The Serb has lost just two matches this season and won the Australian Open and the Indian Wells and Miami Masters. He next takes on the US Open champion, Marin Cilic, who he has beaten in all 11 previous matches.

Before arriving in Monte Carlo, Cilic has played and lost only one match, sidelined by a shoulder injury. He beat No11 seed Jo-Wilfried Tsonga, 6-3, 7-6(5).