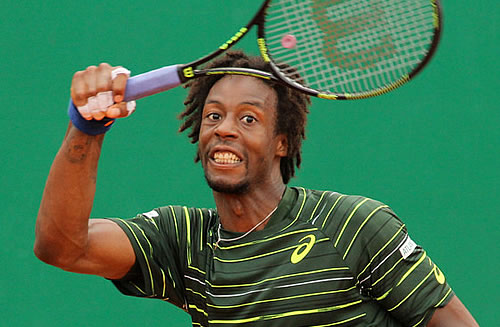 When Gael Monfils appeared at the very last moment on the draw sheet of this year’s Monte Carlo Masters, taking a wild card and a No14 seeding, it was something of a surprise.

The flamboyant Frenchman had returned from a three-week hip injury to play Miami, only to be forced to retire there against Tomas Berdych in the fourth round—and then pulled out of a scheduled appearance in Houston. So yes, it was something of a surprise when Monfils appeared in Monte Carlo, even more so because this has not been a happy hunting ground for him: eight appearances and never beyond the third round.

But for this very French tournament—and the MCCC is just over the Monaco border into France—Monfils cuts a popular figure. He is a showman, a remarkable athlete, and oozes talent in all parts of the court. In short, when he is on form, he can bring a smile to the face of even the most jaded tennis palate.

Despite a catalogue of injuries to his long, rangy body—knees, hips and wrist to name a few—he has been as high as No7 in the rankings, reached 22 tour finals, two of them Masters, and won five titles. He is also one of a rare breed that has won the junior titles in Australia, Roland Garros and Wimbledon in the same year.

The bulk of his success has come on hard courts, indoors in particular. In a resurgent 2014, he won his first title in three years in Montpellier, and he went on to play one of the matches of the year against Roger Federer in the quarters of the US Open, failing to convert match points.

But considering Monfils had only ever won one title on clay, and that as a teenager in 2005, he did have some form on red stuff. His first and only Grand Slam semi was at Roland Garros in 2008, and he had reached the quarters three more times. He also went on to beat Federer on indoor clay in the Davis Cup final last December.

Now in Monte Carlo, he had at last shown that clay form, beating Alexandr Dolgopolov, Federer and Grigor Dimitrov to reach his first semis here, and his first Masters semi in over four years.

He would, though, again have to take on Berdych just a fortnight after that Miami retirement and only two months after the big Czech had left him standing in the quarters in Rotterdam.

And the Berdych is one of the truly formidable opponents in tennis, both consistent and consistently high-performing on all surfaces. This was now his sixth semi-final in his seven tournaments this year, including he Australian Open and Miami Masters, and all six of his losses had come against top-10 opponents.

In reaching his 18th Masters semi, Berdych had dropped not a set, and led the tournament on first-serve points won. In his two semi appearances here before, it had taken Novak Djokovic and Rafael Nadal to beat him—and Monfils had only scored one victory over Berdych in six previous meetings.

It soon became clear that this was a difficult match-up for Monfils. Berdych quickly pinned the Frenchman back with flat, angled powerful strokes off both wings. Monfils for his part seemed to lack the fizz he had shown in previous rounds, and after the first three games and 15 minutes, Berdych got the first break-through with a backhand winner down the line.

Monfils was forced into defensive plays and he cranked up the errors. By 1-4, the Frenchman had made only one winner to 11 errors, and then he faced three more break points. Very soon the set was done, 6-1 in the Czech’s favour—and Monfils had managed just two winners to 13 errors, 11 points out of 37, in 24 minutes.

The second set looked as though it would run away from the Frenchman after an immediate break. But he drew some inspiration from an increasingly vocal crowd to win a 33-stroke rally, and went on to make the break back.

Berdych, though, was quick to respond, upped his own aggressive play, and grabbed back the advantage.

There were a few flourishes from Monfils—two backhand down-the-line passes to hold the score at 3-4, for example—but Berdych looked strong and confident in taking to the net. A volley winner earned him match point and a forehand winner finished the job in 67 minutes, 6-4.

It was, then, yet another impressive, clean performance from the Czech, 21 winners to 18 errors, 10 of them won at the net.

Would this aggressive play be the key to his final, where he would find himself between the devil and deep blue sea? He would again face one of those men who had halted him here in the semis before.

Against Djokovic, he had won only two matches in 20—though the glimmer of hope might come form his last victory, six matches ago, in the quarters of the Rome Masters in 2013.

But against Nadal, although he had won their last match at this year’s Australian Open, Berdych had to go back to 2006 for his previous win—and he had never beaten Nadal on clay.

One thing was for sure: To claim only his second Masters title—a decade after the first—he faced one of the most unenviable challenges in sport.