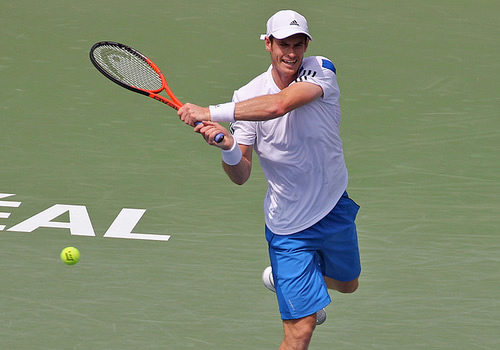 If the opening days in Montreal had wait patiently for action from the top eight seeds—they all enjoyed byes to the second round—there was certainly no lack of excitement at the Rogers Cup as the first round unfolded.

One by one, the tally of winning Canadian men rose until by the end of Tuesday, a record five of them had made it through to the second round for the first time at the tournament—with just one of them seeded.

Canadian wild card Vasek Pospisil recorded the biggest win of his career over John Isner—who marked a less upbeat watershed moment as the USA faced a top 20 in men’s tennis that contained no representatives.

All five took to court on Wednesday, but their antics would, for the time being, take second place as two of the stars of the show, former champions Andy Murray and Rafael Nadal, opened proceedings on Centre Court. They attempted to join a stunning defending champion, Novak Djokovic—who dismantled the not inconsiderable talent of Florian Mayer in 56 minutes—in the third round. The only question was whether they could do it in such impressive style.

First up was Murray, winner of the title in 2009 and 2010, against a not inconsiderable opponent, the 36-ranked Spaniard Marcel Granollers, the man against whom he retired in Rome this year before taking out the rest of the clay season with back problems.

Since then, Murray has won back-to-back titles on grass, a 12-match winning streak, and he had been putting in the miles not only at his training base in Miami but on the practice courts in Montreal.

He admitted ahead of the tournament that he found the transition back to the unforgiving hard courts very difficult, a move that made the body sore, but he had also signed up to doubles here in his determination to get his timing and fitness into top form.

The key thing that seemed to be missing during the early stages of his match, however, was consistency. The tennis was patchy from both men, though it was Murray who made the first breakthrough to lead 4-1. He looked on track for a quick win until Granollers—playing the more aggressive tennis—pulled one break back and continued to force errors from Murray. The Briton, though, held off the challenge, including a couple of bold serve-and-volley plays, to take the set, 6-4.

Murray continued to make life tough for himself as his tally of double faults crept up to six even though his serving percentage was high—it touched 80 percent in the second set.

Granollers continued to step in and earned a couple of lucky volley winners as his reward. Murray then shanked a forehand to give away the break and a 4-1 lead to the Spaniard.

Murray’s backhand in particular was making uncharacteristic errors, but he was offered a lifeline at 2-4 when the adjacent Banque Nationale court, hosting the Canadian Pospisil against Radek Stepanek, erupted with cheers and chanting. Already the MC had informed Centre Court that Pospisil was a set and a break up, and now it became clear that he was on the verge of another popular win. Granollers’ concentration wavered with a double fault, but he held, and went on to serve for the set at 5-3 after almost an hour and a half.

Facing 30-30, the Spaniard threw in a bold serve and volley for set point but Murray, now beginning to find some of the aggressive play that had been lacking for most of the match, opened up his forehand for deuce, and passed the net-rushing Granollers with another down-the-line winner.

It brought a timely break and, continuing to step inside the baseline, Murray levelled, 5-5. Still errors crept in amongst the winners, but he took the set to a tie-break.

Granollers, to his credit, remained bold, and made a fine drop-shot winner to take an early 2-0 advantage. But now Murray was showing better timing and more assertiveness, fired his one and only ace of the match, and took the next seven points in a row for set and match, 7-2.

“I was pretty nervous before the match, which is a good sign,” Murray said afterwards. “I remember after the US Open last year, I kind of went into the Asia swing. I didn’t feel nervous on the court. I felt pretty relaxed and loose, not too worried about what was happening. It was a bit different today. I was pretty nervous beforehand. I’m pretty ready to move forward and not think too much about Wimbledon and concentrate on the US Open.”

Murray’s next encounter will be little easier: He finds the firebrand Ernests Gulbis in the third round rather than No13 seed Fabio Fognini after the talented Latvian came through a tough three sets, fighting off nine of 13 break points. Before that, Murray had the small matter of his doubles match just a couple of hours later. He will hope that one sharpens things before playing Gulbis.

Meanwhile, the home crowd had more to cheer on Centre Court where Levine took on the No4 seed and two-time champion Nadal—though which man they would cheer remained uncertain, for the Spaniard is hugely popular here. Nadal also brought with him a 43-3 winning run since February, with the hard-court Indian Wells title among his seven 2013 titles.

Levine, for his part, was attempting to reach the third round of a Masters event for the first time in his career, and it was quickly clear that the Montreal fans were right behind him, especially when he earned two break points on Nadal’s opening serve. He was unable to convert but held serve in the face of deuce—though he may as well have won the set for the cheers that went up.

He played courageously and aggressively but once Nadal found his rhythm, Levine found himself fighting for every game and Nadal broke for a 4-1 lead and broke again to take the opener, 6-2.

The match began to have the feel of a runaway train: Nadal broke in the second game, and again in the fourth and sixth, as he racked up 28 points to Levine’s 12 in the 6-0 set. And if there was any doubt about the Canadian crowd’s affection for the Spaniard, it was dispelled as they stood to cheer his victory—and once again as he changed his shirt!

So Nadal stays on course for a semi showdown with Djokovic, and both look in fine form already. Both, though still await the progress of two more Canadians: the top seed could face young Peliwo or Denis Istomin while Nadal will meet either Dancevic or Jerzy Janowicz.