Montreal Masters 2013: Novak Djokovic comes from a set down to beat Denis Istomin and reach the quarter-finals 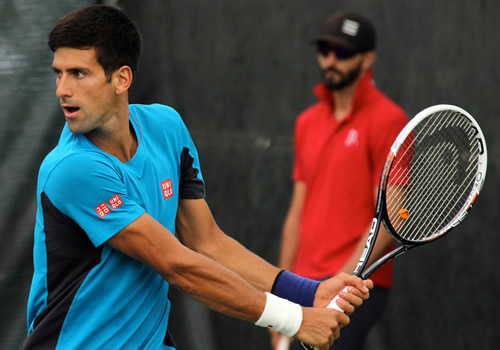 And so the shocks continued to come in Montreal as the seeds tumbled and the Canadians soared at the Rogers Cup.

As if losing David Ferrer, Stan Wawrinka, Nicolas Almagro and many more in the opening two rounds of one of the oldest tennis tournaments in the world was not enough, more big names were to join them before the quarter-final stage.

Andy Murray, No2 seed and on an unbroken 13-match winning streak, did not just lose but lost in straight sets, to Ernests Gulbis.

Tomas Berdych, No5 seed and with his big game apparently thriving on these fast, hot courts, could not fend off the delightful young rising star of Canada, Vasek Pospisil: If the Banque Nationale court had a roof, his third-set tie-break victory would have blown it off.

Then the only seeded Canadian, No11 Milos Raonic, who had struggled this year with form until taking on former world No3 Ivan Ljubicic earlier this season, took out a weary-looking Juan Martin del Potro to become the only remaining seed in the bottom half of the draw.

So when Novak Djokovic, top seed, world No1 and going for his third straight title at the Rogers Cup, lost the first set to the No66-ranked Denis Istomin, pencils were being sharpened once more. This was not in the script, especially as Djokovic had sailed through his opener against the former top-20 player, Florian Mayer, for the loss of just three games.

There seemed to be no particular reason: He played his first match in the evening, too, so the conditions were little different. What he appeared not to have predicted was just how free-swinging Istomin would be when it came to a rare appearance on one of the biggest tennis stages, the Uniprix Centre Court.

For the man from Uzbekistan, coached by his mother and possessing one of the most distinctive pairs of spectacles on the tour, came out with every intention of winning. He had already taken out that other famous spectacle-wearer, the No16 seed Janko Tipsarevic, and disappointed the home crowd by beating their young Wimbledon junior champion, Filip Peliwo.

But in two previous matches against Djokovic, also on hard courts, Istomin had barely made it onto the scoreboard. Only once in six years of Masters competition had he got beyond the second round—he reached Round 4 in Indian Wells last year. Was he about to pull off the biggest upset of his career and of the tournament?

He certainly dominated proceedings in the first set to break Djokovic twice and offer up not a single break point in return. Indeed he dropped just four points in 20 on serve. He was fast, accurate, and hitting the ball flat and hard past Djokovic on both wings: It was, in short, a stunning display.

The crowd was therefore in a dilemma. Here, they love good tennis, no matter whose racket is producing it. They oohed and aahed through the Istomin performance, cheering his bravado and skill. But they love Djokovic here, too, and did not want another big name to fall.

Sure enough, the defending champion responded, dropped only two points on his first serve, managed to convert one of the four break points offered him, to level the match, 6-4.

He, like most onlookers, must have expected a speedy conclusion: He broke in the opening game of the third. But Istomin continued to insist on a frantic pace of tennis—more than once, Djokovic raised his hand to hold off the second serve of the Uzbekistan man. His own service level could not match Istomin’s either, dropping back to 55 percent against his opponent’s 68.

The pressure told, perhaps along with the debilitating humidity that hung over the high-volume court. Istomin found a second wind, attacked with a vengeance and terrific flat speed of racket, to break straight back.

And while Djokovic looked increasingly serious, made growing numbers of gestures to his box in frustration, Istomin seemed to love every minute. He smiled after each winner, beamed after each won game, even tried an entirely unnecessary hot-dog against a Djokovic forehand.

And in the end, that may have been his down-fall: Djokovic never intended to lose, Istomin looked as though he was thrilled just to be playing the match of his career. He offered up what would prove to be a fatal double fault for a break point in the seventh game and Djokovic converted with clinical precision, firing from the baseline deep to each wing. Istomin chased and retrieved for all his worth but could not prevent the break, and although he forced deuce in return, Djokovic held off the challenge.

They were separated by just two winners, 27-25 to Djokovic, but after two hours it looked as though the Serb would deliver the final coup de grace as he brought up a break point at 5-3. Istomin dug deep, picked up drop shots, chased down volleys, and bravely held serve through five deuces. He trailed the mighty Djokovic by just one point in the match, 91-92, but this time, the top seed made no mistake, holding his serve to take the match with an ace, 6-4.

The men received a standing ovation for one of the matches of the tournament so far. Djokovic, as promised after his first win, did a celebratory dance on court, but that must have masked relief as much as pleasure. As he put it: “Just glad to get lucky and dance on the court after the match.”

He afterwards conceded: “It was a tough game. He was a better player first half of the match… He did a great job in staying very solid and putting a lot of pressure on me. Then I had to fight: It was a very even match up to the last point.”

He concluded: “I hope [the crowd] got a good night session for two hours of good tennis.”

No doubt about that, but the big question is whether he can survive the other two highest-ranked players left in the draw. No7 Richard Gasquet, fellow finalist last year, will be his quarter-final opponent and Rafael Nadal, who is hot favourite to beat qualifier Marinko Matosevic, remains on course to set up the match everyone has anticipated: a 36th meeting between two of the giants of the game.