Montreal Masters 2013: Who can halt Djokovic, Murray and Nadal? 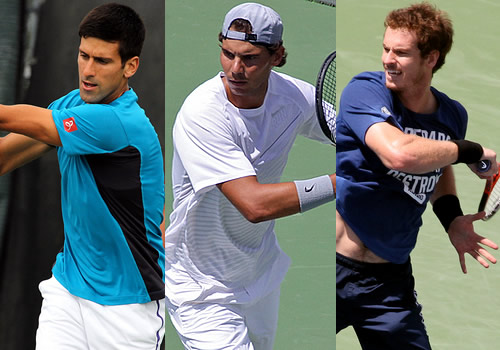 The Canadian Open is one of the oldest tournaments in tennis—only Wimbledon and the US Open pre-date it—and Montreal boasts all three of its most recent champions this week.

Competing for the Rogers Cup, the first Masters event of the US Open Series, are world No1 and three-time and defending champion, Novak Djokovic, world No2 and two-time former Canadian titlist, Andy Murray, and world No4 and the winner in 2005 and 2008, Rafael Nadal.

The three also happen to hold all four Grand Slam titles: Djokovic the Australian, Nadal the French, and Murray with both the US Open and Wimbledon trophies.

The dominance of this trio looks even greater considering that three of those finals were between Djokovic and Murray, while Nadal, absent with injury from July last year until February this year, is now on a 43-3 win-loss run for 2013, winning seven titles from nine finals in the 10 tournaments played since his comeback.

Add into the equation that they have also won all five of the Masters played so far this year and it is little wonder that they lead the rankings race and that each could be the year-end No1.

But No4 in that race, and the No3 seed in Montreal, is David Ferrer. He, like the other three top men, is playing his first event since Wimbledon, where he reached the quarters, and he is the only other Grand Slam finalist this year—his first Major final—losing to Nadal in Paris. He is also the only other holder of a Masters title in the draw, as Roger Federer, current Cincinnati champion, is absent from Montreal with injury.

Ferrer, aged 31, is riding at his highest ever ranking, has won two titles this year, and has continued to break new barriers with each passing season. However, he has continued to struggle against his illustrious compatriot Nadal—he lags behind 4-20 in their meetings—and the top seed Djokovic—the last of his five wins in 15 matches was almost two years ago.

It might, then, be seen as good fortune that he has been drawn in the Murray half. Ferrer did, after all, win two of their last four matches, but Murray is enjoying the form of his life and is arguably the man to beat in Montreal.

Since missing the French Open with back injury, the Briton has been unbeaten. And while his 12-match run was on grass, his prowess on the North American hard courts is undisputed. As well as reaching his first Major final and winning his first crown at the US Open, six of his nine Masters crowns have come in North America, along with two more finals.

It is, then, Djokovic who picks up Nadal in his half, though Murray will see two of strongest contenders outside the top four in his half: the only other Grand Slam champion in the draw, Juan Martin del Potro, and the No5 seed Tomas Berdych. Indeed Murray’s section is tricky from first to last, so can he set up yet another final face-off against arch rival Djokovic?

NB The Canadian contingent is spearheaded by No11 seed Milos Raonic, who is in Murray’s quarter. He is backed by the 19-year-old talent, Filip Peliwo, who won two junior Grand Slam singles titles last year and finished 2012 as the No1 ranked junior in the world. Other Canadians in the main draw are Frank Dancevic, Jesse Levine and Vasek Pospisil, plus qualifier Peter Polansky.

Djokovic is the top seed for the third year and is also aiming to win the Rogers Cup for three years in a row. His first seed is the lowest, No16 fellow Serb, Janko Tipsarevic, who has slid down the rankings from No9 at the start of the year. Although he has beaten Djokovic in two of their last four matches, it’s hard to see a different outcome from their most recent, at the same event last year, when Djokovic won in the semis, 6-4, 6-1.

First, though, the top seed will play the winner between Bernard Tomic and Florian Mayer, and alternatives in Round 3 are Denis Istomin, Jarkko Nieminen or the young Peliwo.

In the quarter-finals, Djokovic could face No9 seed Kei Nishikori or No7 seed and the man he beat in last year’s final, Richard Gasquet. Indeed that third-round encounter could be one of the most entertaining of the tournament: The two players have not met since 2010, since when Nishikori has broken into the top 20 and Gasquet has enjoyed a return of considerable form that has taken him back into the top 10. It’s hard, nevertheless, to see Djokovic not reaching his allotted semi place.

The other quarter, topped by Nadal, is altogether harder to call. For while the Spaniard enjoyed stunning form on his return to clay—and took in the Indian Wells title too—he has not played since losing his first match at Wimbledon.

In pursuit of his 25th Masters title, he looked in very good shape during a two-hour practice session with Murray on Centre Court prior to the tournament and by the time he meets his first seed, No15 Jerzy Janowicz, via the relatively straightforward Levine or Xavier Malisse, he will hope to be sharp enough to handle the huge game and talent of the Pole—though Janowicz’s confidence will be high after this semi run at Wimbledon.

The other section of this quarter is topped by No8 seed Stan Wawrinka and No10 Tommy Haas. Both are enjoying resurgent seasons, with Haas winning Munich, reaching the final of San Jose and, this weekend, the semis at the Washington 500, while Wawrinka has won one title from four finals.

The two have played just once before, in 2006, so it should be a fascinating encounter between two of finest single-handed backhands in the game. That assumes the flair of Philipp Kohlschreiber or Benoit Paire, ranked 26 and 29 respectively in a tantalizing first-round encounter, does not upset the seedings.

Should Wawrinka reach the quarters, though, he has yet to win a set from Nadal in 10 meetings, while Haas has not taken a set from the Spaniard in five meetings, including the final of the Madrid Masters this year.

Murray took less than week’s holiday after his Wimbledon triumph before hitting the hard courts again at his training base in Florida.

This will be a closely-watched phase of the Briton’s year, as the US Open Series has always been a successful swing for him, and he comes to North America to defend a Grand Slam title for the first time.

He is also looking to win his third Rogers Cup, but things are far from easy even before a highly-anticipated meeting with Djokovic for the third time this year.

The two have split the eight matches they have played in the last 24 months, and have contested the last three Grand Slam finals in which they both played. But Murray’s first match in Montreal could be against the hugely talented rising star, Grigor Dimitrov, who plays Marcel Granollers in the first round. Granollers arrives here with the clay Kitzbuhel title this weekend, so the higher-ranked Dimitrov will be the fresher.

Murray’s third round contains plenty of flair, with No13 seed Fabio Fognini playing Marcos Baghdatis and Ernests Gulbis playing Feliciano Lopez. Fognini recently won back-to-back titles in Stuttgart and Hamburg and then was runner up in Umag, all on clay. Gulbis, too, has found some success on clay this season but also won the hard-court title in Delray Beach in February, coming through three qualifier rounds to do so.

Things get tougher still in the quarter-finals, as Murray’s possible seeded opponent is No6 del Potro, finalist in Washington and winner in Rotterdam. He also took Djokovic to five long sets in the semis of Wimbledon in one of the matches of the year. More significant, he beat Murray at Indian Wells this year.

The Argentine could play home favourite Raonic for a quarter-final place, but also in this segment are Mikhail Youzhny, ranked 27, and Jurgen Melzer, ranked 34, who meet in an intriguing first-round match.

Ferrer’s draw begins against the winner between a qualifier and Michael Llodra. In the third round, the Spaniard could meet No14 Gilles Simon, who opens against Nikolay Davydenko. In the quarter-finals, Ferrer’s possible seeded opponents are No5 Berdych or No12 Nicolas Almagro, who has a tough segment that holds the unseeded No20 John Isner, who won in Atlanta and plays in the final of Washington this weekend.

Berdych’s run begins with an awkward opener against either Alexander Dolgopolov or No21 Kevin Anderson, who he has already played five times this year, winning all of them on all three surfaces. But the South African has been no walkover in their previous matches.

If Berdych reaches the quarters against Ferrer, things are little more encouraging: The Spaniard has had the measure of the Czech in six of their nine matches.