Montreal Masters 2013: Rafael Nadal and David Ferrer were both in doubles action in Canada as the US Open series kicks off 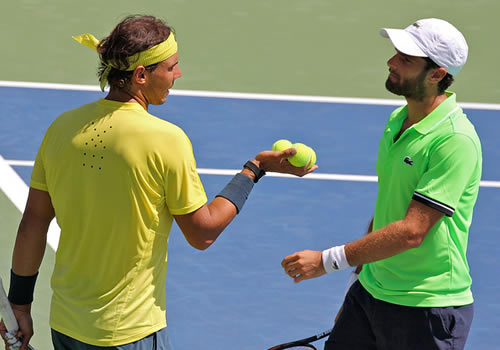 All the headlines, and most of the eyes, have been firmly focused on the singles draw for the Rogers Cup in Montreal.

In particular, where would the three men who have won the last six titles in Canada arrange themselves—and that question was soon answered. Novak Djokovic and Rafael Nadal would top-and-tail the top half while Murray drew the No3 seed, David Ferrer, in the bottom half.

All, of course, received a bye into the second round, so the only chance to see them in action on these opening days was in practice—and around the outside courts, it was only those with the sharpest elbows who stood a chance of getting near the ‘big trio’.

But this is one of the few tournaments on the tour—blessed in being the first Masters hard-court event after the long season on clay and grass—that attracts some of the big names to the doubles draw as they seek to make their adjustments to a new surface.

And so, before any of the star attractions took to the court in their singles campaign, there was the multi-faceted delight of a first-round doubles match—not on Centre Court but on its smaller neighbour. And as is so often the case with big tournaments, it is a gem of a court.

Smaller and, like Rome and the newest show court at Flushing Meadow, sunk below ground level, making it a glorious sun-trap of an arena where almost every seat is rewarded with an up-close and personal view of the action. Indeed here, a player who retreats mid-match for a ‘comfort break’ must skuttle up one of the spectator aisles.

And that is precisely what Nadal did, in the middle of a joyous match of four Spanish men that boasted not only Nadal with his partner, Pablo Andujar, on one side of the net but also Ferrer—enjoying a superior ranking over his illustrious compatriot this year for the first time in his career—on the other.

Ferrer was partnered by another popular Spaniard, former world No15 and current No29, Feliciano Lopez—though even the least-known of the quartet, Andujar, is ranked 52 amid 14 Spanish men in the top 100.

The stage was set, then, for some perfect early afternoon entertainment. It had high glamour, it had a sun-drenched blue stage, and it had Nadal and Andujar’s searing yellow and green opposed by Lopez and Ferrer in the blue and white of the sky. To cap it off, it had a crowd of fans—many probably regular doubles players themselves—that could not believe their luck.

With almost every seat taken, and half them are unticketed, spectators began to gather along the top rank of Centre Court and to crowd open staircases to take in the sport, especially once the match and the score-line heated up.

The rankings, and the players’ familiarity with each others’ games, ensured a blend of camaraderie and competitiveness. They edged to 4-4, with Nadal and Ferrer taking up crouched and attacking positions close to the net as their partners served—surely two of the most intense players on the tour, and lacking none of that focus in this first-round encounter.

Ferrer’s cross-court forehand made early inroads while his partner’s left-handed serve-and-volley skills finished off nicely. But Nadal is no slouch at the net either: He’s become finely-tuned in volleys and especially in his overheads. Indeed he pulled off one of the best smashes of the match in reply to a Lopez volley that pounded him when the F&F pairing went for a break at 6-5.

Instead, the set went to a tie-break which the Ferrer pairing took with ease.

Nadal’s doubles skills quickly came to the fore. He has, after all, won a doubles title every year since 2008, when he took both the singles and doubles crowns in Monte Carlo. Since then, he has won twice in Doha and twice in Indian Wells, and reached the final in Vina del Mar earlier this year.

The F&F pairing came under pressure straight away, unable to resist at the net without being lobbed, and seeing forehands pounded down the line as Nadal cranked up his mighty left arm.

Andujar came to the party, too, taking on Ferrer from the baseline and winning. He and Nadal surged to a 6-1 second set: It would all come down to the tie-break.

The Ferrer-Lopez pairing took the early lead, 4-2, and did so again at 8-6, earning match point at 9-7. But the one of the loveliest backhand volleys in tennis from the Lopez racket let him down, went wide, and a perfect Nadal volley earned him the chance to serve for the set.

Now with his game as sharp as knife—showing just why he had taken up the doubles challenge here—Nadal made no mistake, sealing the match with an ace. The crowd whooped their delight, the four men smiled, shook hands, and minutes later ran the gauntlet of the buggy-ride from this outlier of a court to the locker room.

Such is the pleasure of doubles tennis, such the pleasure when the most talented players find the time and the incentive to show off their skills in the form of the game most familiar to the casual player.

The most successful doubles pairing in recent history, the Bryan brothers, will begin the defence of their title here tomorrow. They arrive with a career-best 24-match winning streak having become, at Wimbledon in July, the first team ever to hold all four majors and the Olympic gold medal at the same time. Theirs is a thrilling form of the game—so fast it almost defies belief. Catch it if you can.

But more doubles delight is to be had from the racket of Andy Murray, also eager to sharpen his hard-court game ahead of his first Grand Slam title defence in New York. He partners Colin Fleming just hours after opening his singles campaign.

Click here to see more pictures from the match