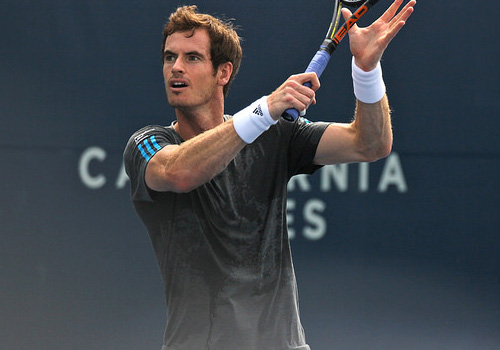 Andy Murray, taking his place before a select band of the media in Toronto this weekend, soon afforded himself a small smile.

The two-time Rogers Cup champion—who won the first of the US Open Series Masters tournaments in Canada in 2009 and 2010—was facing the latest batch of questions about his coaching tie-up with Amelie Mauresmo.

I really enjoy working with her. I feel like she’s helped me a lot. It’s started off well, in my opinion. We had a good training block in Miami: it worked well.

Murray’s announcement that he had taken on, in Mauresmo, a former Wimbledon champion, just as he prepared to defend his own 2013 Wimbledon title, became the focus of almost every media conference throughout the Championships this year—to Murray’s obvious bemusement. It was, certainly, a novel choice—very few men on the tour have female coaches—but surely did not warrant quite so much comment?

Their coaching partnership was, he admitted, for an initial trial period through the grass season, and after his earlier-than-anticipated loss at Wimbledon, things went quiet—until he re-emerged for his next tournament in Toronto, and with Mauresmo by his side.

Barely before he had hit a ball, an article in the Mail Online reported that their partnership was set for the rest of the year: “[Murray] appears to have persuaded Mauresmo to travel 25 weeks per year with him.” And indeed, she had already spent his Miami training block in the Murray camp.

Murray’s smile, then, was prompted by reference to the reports back home:

“I haven’t read anything after Wimbledon, and I haven’t really seen anything that’s been said. Often it’s wrong, with incorrect information, so I don’t read much of it.”

However, he was now more than happy to elaborate on their partnership.

“I really enjoy working with her. I feel like she’s helped me a lot. It’s started off well, in my opinion. We had a good training block in Miami: it worked well.
She integrated well with the rest of the team and the physical trainers, and listened to what they had to say.

“It’s been a good start, and now it’s about producing good results on the court. I feel like I’ve put myself in a good position to do that—had a good few weeks in Miami.”

So is the arrangement now a permanent one?

“Dani [Vallverdu] is going to come to Cincinnati and then Dani and Amelie will both be at the US Open. That’s the plan for now, but I plan on working with her for longer than just the US Open.”

“I don’t want to get into an exact number of weeks—because I was also told that Edberg was going to work like nine weeks with Federer and he’s been with him almost every tournament since the Australian Open!

“So we’ve agreed to work together and I think from both sides we are willing to do what it takes to make it work long term.”

Murray enjoyed something of a lucky break when it came to the Toronto draw. He is currently ranked No10—which he was, quite rightly, quick to defend:

“I’d defend myself and say there’s a reason for that. I did miss the whole of the end the last season after the US Open with back surgery and coming back from surgery I didn’t feel great straight away.”

However, with the absence of Juan Martin del Potro after wrist surgery and a last-minute withdrawal by Rafael Nadal, also due to a wrist injury, Murray got bumped to No8 in the seedings and thus a bye in the first round. But all too late to take part in the doubles competition that proved unexpectedly fruitful in Montreal last year: He and friend Colin Fleming reached the finals.

“I wasn’t originally going to have a bye in the first round because before Rafa pulled out I would have been playing on Monday evening, so I planned all my training around playing Monday, and arranged to come here Thursday to get used to the conditions.”

Murray does, of course, want to be in the best shape, and have the best preparation, as he prepares to make hay in what has been a strong phase of the season for him. He did, after all, win his first Grand Slam at the US Open in 2012, but he has not reached a final since his Wimbledon triumph last year.

“The rankings don’t lie. I need to start winning more matches and push my ranking back up. The main goal for me is to try to win Grand Slams, that’s what motivates me, that’s why I want to train.

“So it’s important to get matches in before the US Open and here is the start of the summer. With only two tournaments to get ready for the Open, it’s very important to do well here.”

And what does he expect Amelie to bring to the equation:

“Every time you start with a new coach, they bring something different: A different perspective, a different tennis language in speaking about things. She’ll be my coach… that is, work on all aspects of the game, tactically, psychologically, a little bit technically—but not so much to be honest—scheduling, she’ll be involved in all my training blocks, so pretty much what every coach does.”

He didn’t mention the table football, which the two have also been playing since they arrived here. One more sign that theirs has the makings of a very happy partnership—and a Masters title before New York would be make it just about perfect.