Marianne Bevis looks ahead to the Monte Carlo Masters, where Rafael Nadal will look to defend his crown 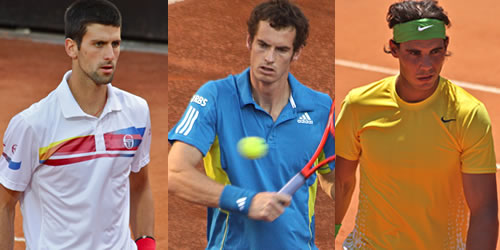 The hard courts have done their best and their worst.

The first three months of 2012 began in the opening week of January with the heat of Doha, Chennai and Brisbane, then hit the Australian Open within a fortnight, and culminated with the gruelling back-to-back demands of the year’s first two Masters in Indian Wells and Miami.

In between, some men ventured down Mexico way to find respite on the clay of South America’s Golden Swing. Others sought shelter from the weather in the first 500 events of the season—at Europe’s chilly Rotterdam or the USA’s less chilly Memphis.

Through it all—the titles and ranking points, the outdoor heat and the indoor stillness, on violet acrylic or orange clay—the same 10 men who dominated at the end of 2011 have remained at the top of the pile. As the hard-court door closes and spring’s clay window opens, only one name, that of Juan Martin del Potro—the solitary Grand Slam winner in seven years not named Roger Federer, Rafael Nadal or Novak Djokovic—is new, replacing Nicolas Almagro at No10.

At the Australian Open, Djokovic, Nadal, Federer and Andy Murray were the last four standing.

At the first 500 event in Rotterdam, Federer beat del Potro to the title.

At the biggest 500 of the swing in Dubai, del Potro replaced the absent Nadal in the semis line-up with Federer, Djokovic and Murray.

And come Indian Wells and Miami, only two of the eight semi-finalists were not from the top four.

Little wonder, then, that all eyes will be on the quartet that has the most to win and the most to lose as April ushers in the longest unbroken phase of the calendar on a single surface.

From now until early June, the terracotta dust will become the tour’s only home for an eight-week run that climaxes at the French Open.

So settled is this season that, once the first two events in Houston and Casablanca are done, the players will barely have to cross a time-zone as they zig-zag between some of the most beautiful locations in an increasingly warm Europe.

But while the surface may be constant and the sleep-patterns regular, such constancy belies the competitive imperative of the clay swing. This is the only season that hosts three Masters in the space of a month, which means big points for the fit and the in-form but also leaves those who are less at home on the slippery dust with nowhere to turn.

But love it or loathe it, the clay drama begins in earnest at Europe’s first Masters tournament two weeks into April. The Monte Carlo Masters, the self-styled “Gem Of the Mediterranean”, is played out amongst the burnt-orange terraces of the Monte Carlo Country Club, and is doubly blessed. It combines the tradition and prestige of a colourful 100-year history with an unparalleled hillside setting overlooking the beaches and ink-blue waters of the Med.

So while this is the only non-mandatory Masters of the year, it always boasts a quality field for its 56-man draw: This year, all but three of the top 25 are in contention.

Perhaps it is not surprising that del Potro has opted out. He committed to Argentina’s Davis Cup quarterfinal tie against Croatia, which has been held on the other side of the Atlantic—and the big Argentine has already played seven ATP events this year.

Also absent is No9 Mardy Fish, who dropped out of the US Davis Cup team with illness just days before the competition. Never a fan of clay, he will spend the time attempting to regain his health and fitness for the rigours of May when two Masters—Madrid and Rome—usher in the French Open for four weeks of competition in just five weeks.

The most notable absentee in Monaco, though, is Federer, a quarterfinalist last year. After piling on the points and titles during the hard-court—and especially the indoor—season, he admitted to tiredness after losing in the third round of Miami. But with his relatively early exit from Florida, he may still consider accepting one of Monte Carlo’s wild cards, if only to defend those 180 points.

For this year’s clay season is unusually pregnant with ranking significance. After his strong run through the hard courts, Federer has closed the gap on Nadal to just 900 points and, while the Swiss has only 630 points to defend until the French Open, Nadal is defending titles from Monte Carlo and Barcelona as well as final finishes in Madrid and Rome—a nerve-tingling 2,700 points.

And Nadal has pressure from above as well as below. This year, unlike last, Djokovic has opted to play Monte Carlo. While that will carry little significance for his own ranking—he is 2,600 clear of the field—it could affect Nadal’s. If the Serb reproduces the form he showed in beating Nadal in Madrid and Rome last year, he may prevent the Spaniard from defending his 1,000 points.

The other factor in the rankings scenario is the No4 man who made such a strong impression on the clay last year.

Murray had Nadal on the run in the Monte Carlo semis despite carrying an elbow injury, and took the Spaniard to a third set. The Scot was even more impressive in Rome, losing—just—in a final-set tie-breaker to eventual champion Djokovic. This year, Murray has maintained a better level of tennis and confidence since narrowly losing in the Australian Open semis, and he also has Ivan Lendl on side for some specialised clay training.

With just 810 points to defend before Paris—and placed fewer than 1,000 behind Federer in the rankings—Murray could be ready to make his own move at the expense of those above him.

There are, of course, others who could snatch valuable matches during these points-rich tournaments, men who are playing near their career-best. World No5 David Ferrer, No6 Jo-Wilfried Tsonga, No11 John Isner and No12 Nicolas Almagro, as well as finding good form, have all used the bridge between the hard-court and the clay seasons to hone their skills in Davis Cup ties on European clay.

But their roles seem, for the moment at least, to be as spoilers rather than champions, men who may deprive one of the top four of points at a crucial juncture along the road to Paris.

One thing is certain. The order of things at the top of men’s tennis by the time they swing into clay’s conclusion at the French Open is anything but certain.