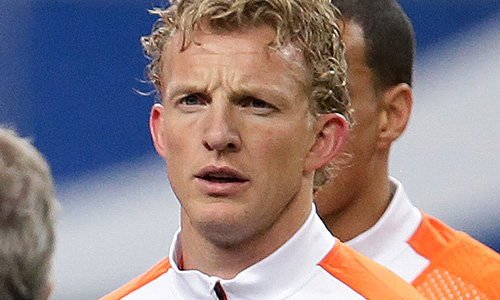 Robin van Persie has spoken of his admiration for Dirk Kuyt after the former Liverpool striker earned his 100th Oranje cap in the Netherlands’s 2-1 victory over Mexico.

The Fenerbahce man, who has been linked with a shock move to Manchester United in recent weeks, started at left wing-back before switching to the right and even playing up front as the Dutch chased an equaliser after Giovani dos Santos’s opener.

In the end, it was Galatasaray midfielder Wesley Sneijder who levelled before Klaas-Jan Huntelaar scored the winner from the penalty spot to set up a quarter-final clash against Greece’s conquerors Costa Rica.

33-year-old Kuyt never looked likely to add to his 24 Dutch goals on his 100th cap – and Netherlands captain Van Persie lifted the lid on his tribute to the former Liverpool striker.

“We have given Dirk a very nice gift for his 100th international game. I had a little speech for him in the locker room. I told him that ‘I am so proud of him and that he is an example for young and old’,” Van Persie is quoted as saying by the Guardian.

“There are only seven players who have reached this number of internationals in Oranje. He stayed a long time stabbing away on 98. It is fantastic, if anyone deserves this, it’s him.”