NetSuite Open 2013: World No1 Ramy Ashour capped his 26th birthday with a 3-1 win against James Willstrop in the semis 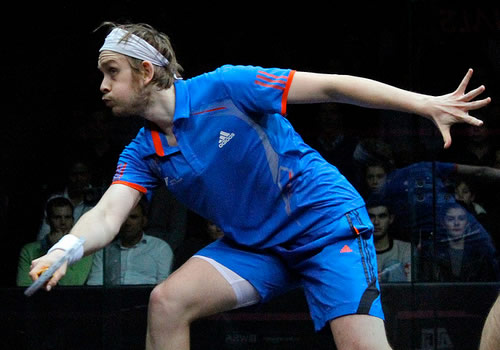 Ramy Ashour enjoyed a very happy 26th birthday as he progressed into the final of the NetSuite Open in San Francisco, beating Briton James Willstrop 3-1.

The win made it an incredible 44 wins in a row for the Egyptian – earning him a rendition of happy birthday from the crowd, obviously very impressed with his performance.

And with good reason, too, for the World No1 had to be at his best to beat the tall Yorkshireman, who is at his physical peak at the moment and showing off a new forehand with added snap he has been working on.

He said: “It’s always a battle between us. He gets in his comfort zone and puts you out of yours. I was pushed to my limits, or even further – he played really well in the last two games.

“He came out in the fourth firing, which is not the norm when you’re down. But that’s what makes him a former World No1.”

Willstrop did have regular problems with the surface of court, which is open to the elements, as shown when big swathes of rainwater showered down on the court during the second game.

He regularly stopped between points to wipe away damp spots on the court which troubled his trademark lunge, which he was often forced into by Ashour’s trickery and breakneck speed.

It was Ashour’s electric pace that saw him take the first, 11-5, as he came out of the blocks firing.

He unsettled Willstrop, who typically prefers a slower-paced game, with his speed, which played well on the dead court, and generally played with the apparent effortless brilliance with which Roger Federer played tennis in his prime.

The Yorkshireman came back into it in the second, though, reading the Egyptian a little more and forcing the game more into his comfort zone of rallies into the back court.

After twice fighting back from a three-point deficit, Willstrop found himself at 9-9, but then put a fairly straightforward forehand volley, uncharacteristically, into the tin – and it allowed Ashour to take the game.

After more impressive play – and Ashour perhaps riled from a couple which left him remonstrating with the umpire (with good reason) – Willstrop stormed the third 11-2.

But Ashour recovered his brilliant form in the fourth, taking it 11-7.

Willstrop said: “Ramy is unbeaten for so long and is setting an incredible record for the sport, so you have to take positives from a 3-1, especially in these conditions – he’s known to be very good on a cold court. So you have to acknowledge his performance.

“As kindly pointed out, I’m 30 years old, so I don’t know if I’ve got many tournaments left, but this is a great place to play.

“If you had said about this 30 years ago, I think they would have laughed in your face. It’s a tremendous place to play squash.”

The fiery Frenchman showed off movement even more electric than usual, perhaps due to, just a week before, winning the Abierto Mexicano de Raquetas at the 2,500m+ altitude of Toluca, Mexico, beating Mohamed El Shorbagy in the final.

Gaultier controlled the T imperiously, and, despite his efforts, there was nothing that Selby could really do to hurt him, as Selby himself admitted.

He said: “Greg had everything – he gave me no chance, not one chance. He was playing perfect squash.”

The Essex man did, however, say he was pleased about the rest of the tournament.

He said: “The rest has been fantastic. I came here with not too high expectations, and played really well in the first two matches.”