Newcastle 0 Arsenal 1: Arsene Wenger was full of praise for his players after their tense victory secured a top-four finish

Arsene Wenger was full of praise for his Arsenal players after their tense victory at Newcastle United secured a top-four finish at the expense of Tottenham.

Laurent Koscielny netted the eventual winner in the 52nd minute at St James’ Park when he turned home Theo Walcott’s free-kick to ensure the Gunners finished a point ahead of Spurs, who beat 10-man Sunderland 1-0 thanks to a late Gareth Bale winner.

Arsenal found themselves seven points behind Tottenham after defeat by their rivals in the north London derby back in March. 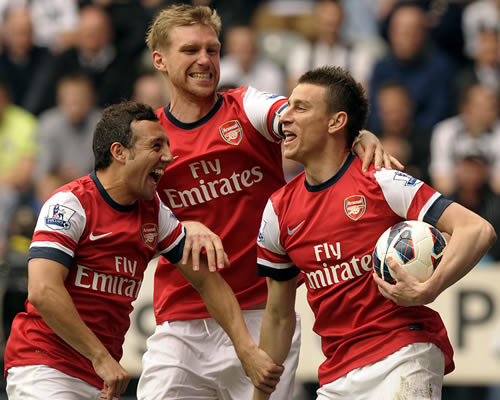 But Wenger was bursting with pride at the resilience his side have shown since then as they clawed their way back above the Lilywhites.

“I’m proud of my team’s character and spirit,” Wenger told Sky Sports. “These players are special. I told them [that] many times. And they’ve shown it. In the last two months they’ve been absolutely exceptional. It’s a good basis to go into next season on such a strong run.

“We were very far behind Tottenham after the defeat there. Everybody ruled us out but we have shown character and desire and came back. We made 73 points – that’s three better than last season.”

Wenger continued: “These players deserve it. I’ve had many groups in my life and the focus and desire to do well was always exceptional.

“It’s one of the best groups I’ve ever had on that front. The combination of quality and attitude has been great. That’s why I always felt we would come back.

“We want to fight for silverware next season. But let’s not forget the consistency we have shown over the years to be again in the Champions League, knowing everybody is desperate to get in there.

“Consistency is the most difficult thing in our sport and we needed to be resilient.”