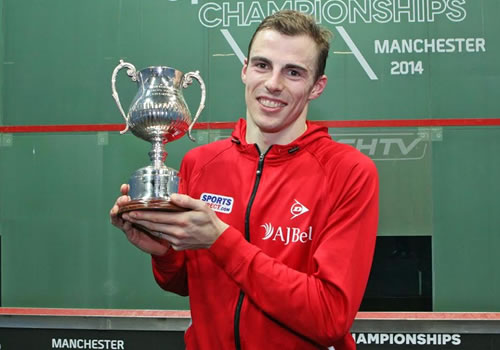 Nick Matthew with the trophy

The Yorkshire pair, who have a famously turbulent relationship, battled it out for 78 minutes in front of a capacity crowd at the National Squash Centre in Manchester.

Despite taking an early lead Willstrop could not contain the triple world champion who fought back to edge through 12/10 in a close second game before taking control of the match.

“That’s got to be up there with one of my best ever wins against James,” said Matthew. “Some of his backhand drives were ridiculously tight, he was in such great form that at the moment it’s relief more than delight! Although I’m sure I’ll be happy in five minutes!”

Matthew, who took his young niece onto court to help him collect the trophy said: “I won’t be playing for much longer – you’re a long time retired which is why it means a lot to me, having all my family here and my support staff. I know I haven’t got many more times left on this stage so I really do appreciate everyone’s support,” added Matthew.

In the women’s final world No4 Alison Waters was in fine form as she swept past Irish challenger Madeline Perry to claim her fourth British National squash title.

The 29-year-old Londoner was competing in her eighth National Championships final and was in a confident mood from the start as she took a quick first game 11/3.

Perry struggled to recover as Waters stamped her authority on the game, always looking the more threatening and causing the Irish player persistent problems, taking the second and third game 11/6 to secure victory.

“I’m so pleased, I’ve had plenty of tough battles against Madders in the past so I was ready from the start.

“I just played my game and was confident going into it. I’m so excited to have won a fourth title.

“Big respect to Madeline, I know how long she’s wanted to get a National final, she’s 37-years-old and if I’m still playing as well as she is at 37 I’ll be delighted!” said Waters.