Nicol David is, quite simply, the queen of squash—and there is plenty of evidence to suggest she is one the finest athletes around 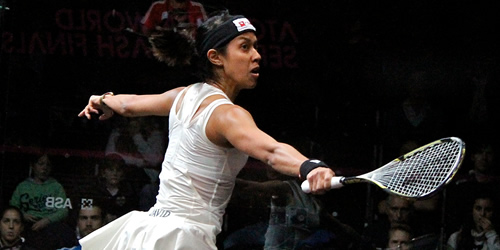 Nicol David has been world No1 since August 2006 Photo: Marianne Bevis

The event is the World Series Squash Finals, perhaps the ultimate prize in this high-stakes, high-tempo, high-intensity sport.

The place is the prestigious Queen’s Club in London’s Kensington, where a futuristic glass cube has been erected within a white bubble amid the velvet, green tennis courts of this Victorian haven.

Only the elite of the last 12 months are eligible to play—eight men and eight women—and the best of the best must play five matches on five straight days to lift their very special trophy.

These gladiators are so fit that the likes of multiple Olympic champion Victoria Pendleton, a guest on semi-final day, are impressed, and they leave so much sweat on the court that it must be mopped up at every pause in the action—though in squash, the pauses are both short and few.

One of the 16, however, looks always to be unhurried and rarely to be hot and bothered. Indeed Nicol David looks barely old enough to be in this company at all, despite a dozen years on the pro circuit.

Yet the petite woman who pottered about the media centre for hours on end, chatting with whoever sought her company, was perhaps the most illustrious player of them all. David is, quite simply, the queen of squash—and there is plenty of evidence to suggest she is one the finest athletes that any sport currently has to offer.

David has been world No1 since August 2006: that’s a stretch of 82 unbroken months. To give some context, Roger Federer—whose unbroken run at No1 is more than the twice the length of the next man—managed 55 months. The most successful female tennis player, Steffi Graf, managed 43 months.

She has won the Asian Squash Championships a record nine times, the prestigious British Open four times, and was voted Player of the Year on six consecutive occasions, 2005 to 2010.

She was unbeaten during 2008 and 2010, and in 2012 she won all but one tournament, and has just brought the current season to a fitting climax by defending her title at the World Series Finals in London.

David, then, is as close to royalty as squash gets—yet is also its ideal figurehead: modest, charming, generous with her time, unstinting in her efforts to spread “the word”.

That “word” is the Olympics for, as Pendleton told David when showing off her own Olympic medals, “Your consistency is incredible and you really are amazing. You so deserve to have one of these.”

So when we talked, sitting on pair of hastily-found chairs and against the loud soundtrack that preludes the next match, I wanted to know her thoughts about squash missing out on Rio 2016 and her own chances of ever claiming a medal. Rather than disappointment, the question elicited a huge smile.

“The Olympics? That would be a dream—if I could do that! I will do whatever I can to get squash in the Olympics anyway—that is the ultimate goal. But if I’m still in the game, then why not? I will have to look after my body, play fewer tournaments—but it would be a dream.”

She has said, on the promotional film for the International Olympic Committee—and several times since—that she would trade all her world titles for an Olympic gold medal, but I wanted to know how she maintains enough motivation, after more than 12 years as a professional player, to make that a possibility?

“It’s in my own performance, how I play the game, how the squash is, not the results: how I feel on court, how I manage mentally, to improve technically all the time. That’s my motivation.”

That, and the constant pressure from her competitors:

“It’s never easy: Every time you step on court with them, it’s harder…they are going to be more relaxed, more determined, they are going to go for their shots…like Laura [Briton Laura Massaro], she goes for her shots. You are always on your toes all the time.”

New technology has played its part in this constant improvement, but she credits her support team for her own continuing development.

“Lighter rackets, for example, have made some shots a bit faster to play well, but we still have to work really hard. But the training techniques have changed more. My game has improved even since I won my first world title.

“The level is higher because everything has got a lot more professional—the physios, sports therapists, you have a whole team backing you up to make sure everything is in place when you’re on court.”

And on court, to this untutored eye at least, it is David’s movement that stands out. She has a fluidity of style, a calm poise married to tactical smartness. She takes up a pose like a dancer, on her toes, to serve and to receive, moves like quicksilver, rarely seems out of position. Yet even here, she has worked on improvement.

“My footwork and speed are my main base, but now I use them more efficiently, instead of just running around like I used to!

“I still do a lot of running with my sports trainer, a lot of movement and other kinds of work outside the court. And I’ve just started a bit of street dance as well—it’s good for the rhythm!”

Given her Olympic ambitions, it seemed impertinent to speak of retirement, but biographies have mentioned her abilities in mathematics and her interest in engineering—before squash became her passion. So what will she do when squash has had its day?

“I’m going to have my own academy, probably in a year or so, and as I move on, I want to create more interest in squash in Malaysia [her home, though she lives and trains in Amsterdam]. I really want to give something back to the sport.”

Meanwhile, there is no hint of an end in sight. Who, indeed, would want to leave the squash “family”—for a family is what it feels like, as the players come and go, all keen to talk about their sport and to back the 2020 bid. I wanted to know if it really was as friendly as it seemed.

“We are very lucky because it is like a community. Everyone wants to build the sport, to bring it up to where it should be. We are very good together, practise together, even share rooms together. Squash has always been a social sport—it’s grown up in communities, in clubs. And we play with each other, train with each other.

“Once we get into the Olympics, we may get bigger. But I still think there will be a good connection between the players. We certainly want to keep that as well.”

With that, the music behind the curtain cranked up a little more, and David was whisked off to record another film: but not before she reminded herself of my name, thanked me, beamed her trademark smile—and thanked me again.

Nicol David, the pleasure was mine. If any sport deserves Olympic status, it is this one, and if any athlete deserves an Olympics medal—well, I’m with Victoria.