Nicol David and Roger Federer join forces to back squash's bid for a place at the 2020 Olympics. Marianne Bevis reports 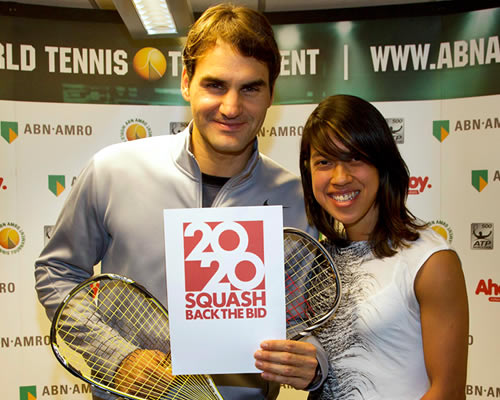 The collision of stars that took place behind the scenes at the ABN AMRO tennis event in Rotterdam could do no harm at all to squash’s burgeoning campaign to join the Olympic family in 2020.

But despite the star appeal, this would be no collision—rather a joining of forces for a very special campaign. For David and the world-wide community of squash are hoping to bring their sport into the Olympic fold that already includes tennis as well as that other racket sport, badminton.

She has been world No1 since August 2006: That’s a stretch of 82 unbroken months. To give some context, Federer—whose unbroken run at No1 is more than the twice the length of the next man—managed 55 months. The most successful female tennis player, Steffi Graf, managed 43 months.

She was unbeaten during 2008 and 2010, and in 2012 she won all but one tournament—and even the legendary Jahangir Khan managed only six world titles compared with David’s seven.

Still only 29 years of age, David is therefore as close to royalty as squash gets—and she is also its ideal figurehead: modest, charming, generous with her time, unstinting in her efforts to spread “the word”.

She admitted to me early last month—in the wake of the International Olympic Committee’s latest assessment of squash and its global appeal—that she would do whatever she could to get squash in the Olympics—her “ultimate goal”—even though she may not still be playing in 2020. She went so far as to say she would trade all her other gold medals for an Olympic gold medal.

The signs are already looking very good. Squash has transformed itself in the last few years with hi-tech glass, glow-in-the-dark courts that can be erected amid Egypt’s pyramids, inside New York’s Grand Central Station or on Hong Kong’s waterfront—and the spectators and TV cameras have followed, able to appreciate the dynamism and 3D beauty of this demanding sport.

Some of the spectators won to the cause have carried special weight—like Olympic multiple gold medallist Victoria Pendleton—and David was here to recruit another media heavyweight. Federer was more than happy to oblige.

David started by presenting him with a signed squash racket, but he joked that he had left his at home.

“I used to play a lot when I was younger, every Sunday with my dad. Always a big fan of squash, it would be wonderful for a racket sport like squash to get in the Olympics.”

Then he added: “Congratulations on your amazing career.” Perhaps he knew that she had, last month, just defended her World Squash Masters title in London.

David would not admit to being a tennis player, though she was clearly a fan—of the man and his sport. After the dinner together, she explained:

“I’m a tennis fan but not a player. I follow Roger’s progress and he definitely brings the sport up to another level.

“It was exciting. He’s such a great guy and true champion. He’s so down to earth. He showed us what it’s like behind the scenes to be a tennis player. It’s very similar to squash, so it’s been great to spend time with him.”

But it was the words of support that Federer gave the game of squash itself that she will hope hit home when it comes to the vital IOC votes in September: “I think it’s a wonderful sport.

“It’s unfortunate some sports don’t get the opportunity to be in the Olympics. I think squash would deserve it. They run a great tour and they have great players and characters. I’d personally be very happy for them.”

Two-time men’s world squash champion, Nick Matthew, quickly tweeted the news, and later added a message: “Best picture I have ever seen.” It linked to David’s photo of Federer holding the 2020 Backing the Bid poster, across which the Swiss had written: “I am, are you?”

The World Squash Federation President N Ramachandran was just as delighted: “It is fantastic to have Roger Federer supporting squash’s campaign to join the Olympic Sports Programme.

“His endorsement means a great deal because he is a true sporting icon who knows what it means to compete at the Olympic Games.”

But for now, the coming together of stars across a pair of rackets ended, Federer headed to South Africa for an altogether different campaign—his own Foundation—while Malaysian David headed back to her current home just a hop, skip and a jump from the tournament in Amsterdam—ready, no doubt, for more success both on and off the squash court.

Find out more about how squash has reinvented itself, and join Nicol and Roger in ‘Backing the 2020 Bid’.