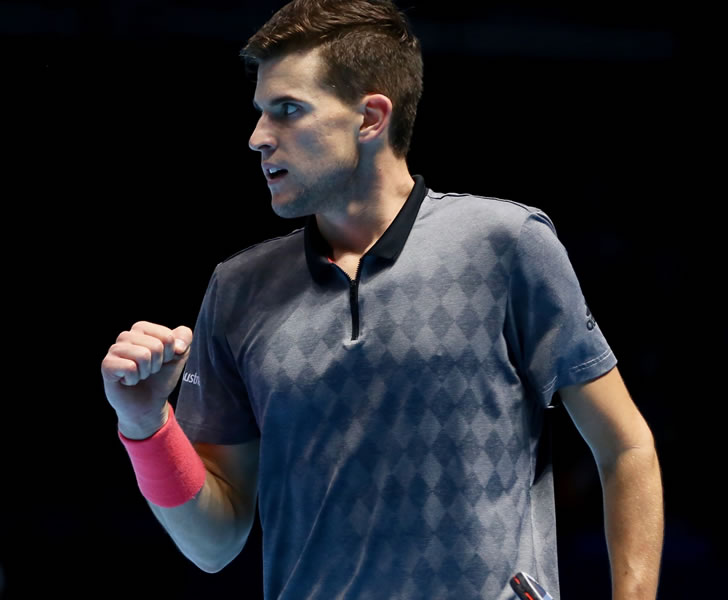 It was a mathematician’s dream, but for everyone else, it was a nightmare of scenarios. Such were the complexities of the final round-robin matches for Kevin Anderson, Roger Federer, Dominic Thiem and Kei Nishikori.

In fairness, the picture for the only O2 newbie among them, Anderson, looked rosy. He already had two straight-sets wins in the bag, and showed precisely why he was in the season’s finale for the first time. It was no fluke that he had made the final at Wimbledon to hit a new career-high of No5: He had done it the hard way with back-to-back comeback five-setters over Federer and then John Isner, almost 11 hours of tennis.

The ever stronger, ever more attacking tennis of the 32-year-old Anderson had carried him through four three-setters to win the New York Open at the start of the year—via Nishikori, too—and through tough opposition—including Nishikori again—to win his first 500 title in Vienna.

His wins in London took him to a career-best 47 match-wins, and now it would be only the slimmest of margins that could prevent him making the semis: Essentially, a loss to Federer in straight sets and a victory by Nishikori in straight sets—and even then, it would come down to the percentages of games won.

And if Thiem won, he was through regardless.

For Federer, his chances of advancing were much more tenuous since losing his opening match to Nishikori. Essentially, he needed to beat Anderson and hope that Thiem, who had lost twice this week, could at last get a win on the board.

So the first singles match of the day not only determined the hopes of the two men involved, Nishikori and Thiem, it also underpinned the hopes of the thousands of Federer fans who flocked to the O2 for what might be his last match of the season, and only his second ever exit at the round-robin stage. The first was in Shanghai a decade ago, and that the result of a chronic back injury.

And Nishikori had won three of the pair’s four previous matches, including a 68-minute victory just weeks ago at Thiem’s home tournament in Vienna.

What, then, were the chances that Thiem could break his duck and at least match his single-win performances of the last two years? He would, he knew, have to defeat the Japanese star in straight sets to stand any chance of staying in the competition. His view was clear:

“I have to get my good tennis back. I really want to play a good match. Doesn’t matter if it’s the last one here or not.”

The Austrian’s determination was clear from the start. A double fault from Nishikori in the second game brought up an early break point, wasted by Thiem with a poor backhand return of a second serve. He compensated with a big forehand for another chance, and this time converted for the break, 2-0.

Nishikori pulled off a fine forehand drop winner to challenge in the third game, but Thiem consolidated, 3-0. But it did not take long for Nishikori to earn break back points with some acute forehand angles, and although Thiem resisted two, a double fault created a third. But a fourth came and went, and the Austrian held, 4-1.

Countless deuces and break points piled up in the sixth game, as Nishikori’s serve looked increasingly weary, and a double fault on the fifth break point finally gave away the game, 5-1. Thiem served it out with his signature swinging serve and forehand winner, 6-1, in around 40 minutes.

Nishikori had managed to put just 43 percent of first serves into the box: He started the second set rather better and he went 2-1 having dropped only one point on serve.

A superb rally from both, with multiple dinks around the net, saved a break point, and another athletic net exchange kept things on serve for Nishikori in the liveliest passage of play thus far: 3-2.

But Thiem seemed to be on a mission, and his single-handed backhand was increasingly breaking up the Japanese game. One such down the line broke for a 4-3 lead, and the Austrian closed out the win in some style with a cross-court running pass and then an ace, a love hold, 6-4.

It earned the Austrian $203K, so a good hour and a half’s work, but it also saved face. What is more, he still had an outside chance of qualifying if Federer did not win at least one set against Anderson.

It could, then, go down to the wire for the Austrian unless and until Federer won a set in a few hours’ time. He did not, however, hold out much hope:

“They are both very nice guys. I mean, I messed it up the two previous matches myself. I didn’t really think about it also today in the match. I wanted to play well again. That’s what I did part of the time. Well, you never know what happens tonight, but I don’t think it’s going to happen.”

For the Swiss, there remained the small matter of beating the 6ft 8in powerhouse from South Africa who had looked the best player in the group thus far. And lest anyone forget, Anderson did what had looked impossible at Wimbledon just five months ago: scored his first victory over Federer from two sets down.

Federer this time needed around half a dozen games to stay in London. He would want more than that, though: A statement win.