Sascha Zverev wins over the London crowd with a 7-5, 7-6 victory against Roger Federer to secure his spot in Sunday's final 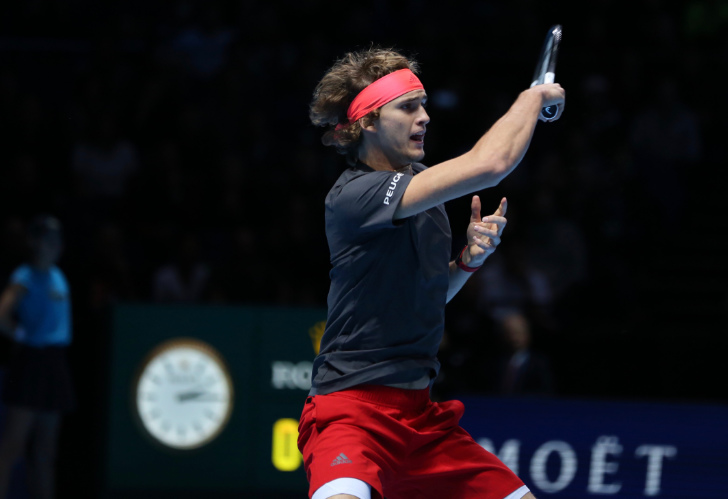 There was a moment, after the first day of this year’s Nitto ATP Finals when it looked as though the six-time champion Roger Federer might fail to reach the knock-out stage of the tournament for the first time in London.

Only once in 16 appearances had he failed to make the semi-finals, and that was courtesy of a back injury that plagued him through the round-robins phase in Shanghai.

This year, his form had been more unpredictable than usual since the grass season, though he arrived in Halle as No1 after winning his 20th Major at the Australian Open, the ATP500 in Rotterdam, and making the final in Indian Wells. His opening match here against Kei Nishikori was a poor one on both sides, a tense, error-strewn affair that Nishikori won, 7-6(4), 6-3.

Perhaps the up-and-down results were his 37 years beginning to bite, or perhaps the emotional pressure of seeing his 100th title on the horizon. Federer failed to defend in Halle, Wimbledon and Cincinnati, which could have sealed his century. Instead, he arrived in London at 99, which made the questions about ‘when’ and ‘what if’ still more persistent.

He countered: “I’m still not thinking of number 100. I won’t let that get in my head [and] make me go crazy, because it should be something I’m excited about and not something I should feel extra pressure.”

He added: “As long as Novak is in the draw anyhow, he’s playing so good again, it’s never going to be easy.”

Fortunately, the prospect of facing the world No1 and the best player of the last five months in the semis was avoided: Dominic Thiem put out Nishikori, and then Federer played his match of the week to beat Kevin Anderson in straight sets. He topped the group, and the unbeaten Djokovic, who beat Federer in both the Cincinnati and Paris Masters, topped his without dropping a set let alone a match.

By Saturday, then, only the top four seeds were left. And in his 15th semi-final of the tournament, Federer would play No3 Alexander Zverev, a man 16 years his junior but the best and brightest of the #NextGen by some distance. Even as a 20-year-old, the young German had made the cut for London last year. This time, he was into the knock-out stages for the first time.

And one thing the intelligent, powerful German does not lack is the game to do damage to the very best. In five previous meetings, he had beaten Federer twice, and here last year, he pressed the Swiss to the limit in a 7-6(6), 5-7, 6-1 loss.

Zverev had three Masters titles from five finals to his name, and had stacked up more wins than anyone else on the tour, 56. Against the serving maestro, John Isner, the 6ft6in German had served more aces, 18 across an hour and 20 minutes to the American’s 10, and at times in excess of 140mph.

And Zverev carried on against Federer where he had left off against Isner, going on the attack—he would go to the net more often than Federer and win 16 points there—and would offer up not a single break point in the first 40-minute set.

Federer threw the kitchen sink at the German, who had shown small signs of back stiffness in his warm-up this morning. Zverev was run ragged from front to back of the court time and again. But he resisted the pressure, and held the seventh game.

Now the German’s serve was warming up nicely: he was again hitting at 139mph. In contrast, Federer’s serve was off, rather as it had been in his opening match. It looked as though they would make it to a tie-break, until the Swiss serve let him down at 5-6, and Zverev broke to love.

Federer shook his head, tried to shake out the tension, but was down a set, 7-5, with a 55 percentage for that first serve. He opened the second set with more determination in his strokes, and a huge forehand opened the court in the third game to earn three break points, 0-40. He converted the last of them after a long backhand exchange, 2-1.

But still the Swiss serve continued to let him down. He shook out his wrist, but missed every first serve to hand the break straight back, and never looked like breaking again. The German went on to hold to love twice and to 15 twice, though Federer’s serve held firm as far as the tie-break.

Now there was nothing between them, and the already partisan crowd went into overdrive on every point. Federer seemed to up his level, have the edge, and Zverev served at 3-4 down with Federer in control of the rally.

But the German called a halt for, it afterwards transpired, a ball falling from a ball-kid’s hand at the back of the court. Few saw what happened, including umpire and Federer—but the point was replayed to jeers and whistles form the crowd which only grew in volume when an admirably calm Zverev aced the point for 4-4.

Indeed it would be Federer who dropped the first point, and Zverev was left to serve out the win with a big volley winner, 7-6(5).

Unfortunately, what should have been a celebratory interview turned into a jeering fest at the downcast Zverev, who behaved impeccably and courteously, but fought to control the emotions.

The reaction was not justified, and the crowd did come to see that: As Zverev said afterwards, he could hear the change from jeers to cheers, and it helped, but he also admitted that he afterwards needed time to himself in the locker room to get hold of his emotions.

Lest fans forget, this player is just 21 years old, and this would have been an emotional win irrespective of the circumstances. Federer has long been a supporter of and mentor to the young German, and the affection and admiration is clearly mutual. 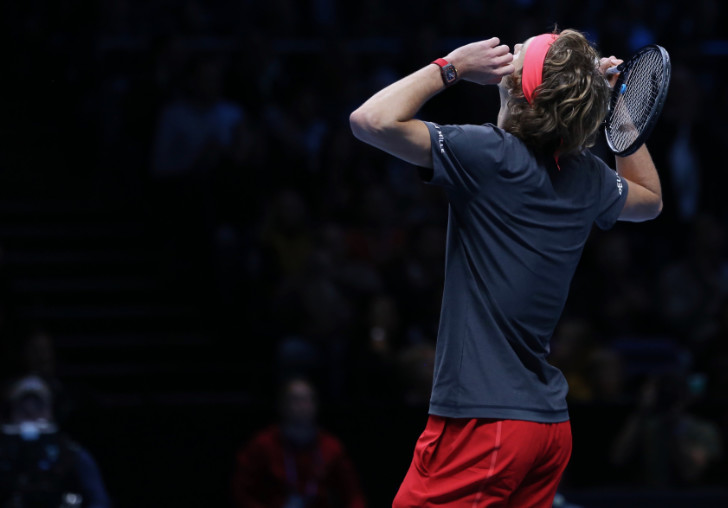 “I apologised to Roger at the net already, but I want to apologise to fans as well. There are a lot of Roger fans here, as he deserves. For what he’s achieved and what kind of guy he is, he should have the most fans in the world—and in London especially with how much history he has here.

“Again I’m very sorry this happened, I didn’t meant to upset anyone, I can only say sorry—I don’t know what else to say right now.”

Federer was, naturally, disappointed with the result and with his own level of play, but bore no ill feeling to Zverev.

“Sascha doesn’t deserve it. He apologised to me at the net. I was like, ‘Buddy, shut up. You don’t need to apologise to me here. Congratulations on a great match and a great tournament so far. All the best for the finals.’

“He shouldn’t be apologising. He didn’t do anything about it. He just called it how it was… Everybody deal with it. You know, I did. We move on.” 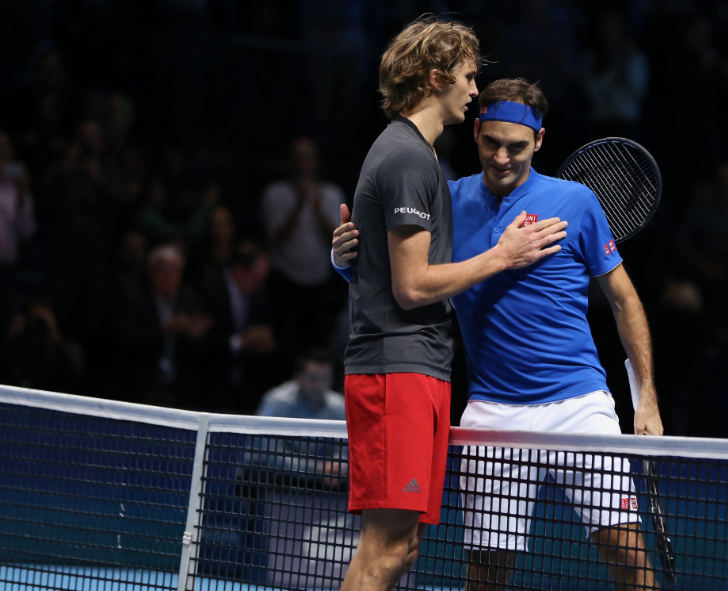 And move on the tournament will, without Federer. And that opens the door still wider for Djokovic to become the oldest champion here and draw level with Federer on six titles.

First, there is the not-so-small matter, literally, of Kevin Anderson. The big 32-year-old took out Federer at Wimbledon but lost to Djokovic in the final after taking almost 11 hours to come through the quarters and semis.

Could he turn around his 7-1 deficit to cap what has already been the best season of his career? London would soon know.