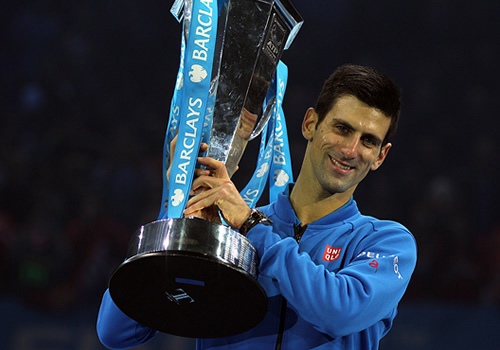 Everywhere you looked, there were records on the line as one of the most popular and intense rivalries—Novak Djokovic and Roger Federer—took to court for the biggest prize on the ATP circuit, the World Tour Finals.

The two have won 10 titles between them at the season finale over the last 12 years—a remarkable run of dominance that has denied the likes of 14-time Grand Slam champion Rafael Nadal at the knock-out stage four times.

Federer already tops the list in almost every one of the tournament’s categories: Most titles, six, most finals, 10, most appearances, 14, most match-wins, 52. With a seventh title, he would naturally extend all of them, but also maintain his challenge for year-end No2 over Andy Murray.

Djokovic could become the first man to win this title in four consecutive years, but just by getting this far this year, he set a remarkable new record of 15 consecutive finals: That is, every tournament since he won the Australian Open. He had also become the first player since Nadal in 2008 to pass the 80 match-win mark in a season, and scored a personal best 30-3 record over top-10 opponents over the last two years.

These two, then, were giants of the game, and with a 2015 back-story to add another dimension to their rivalry. 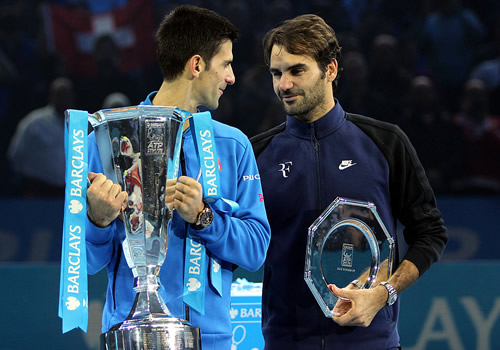 Djokovic had proved to be almost untouchable all year in compiling an 81-6 run, but Federer was the one player to have managed three wins in seven matches against the world No1, the last one just days ago in their round-robin meeting here. And they had also met in six finals, two of them Grand Slams, three of them Masters.

Stir into the mix that this was the match denied to the packed O2 arena last year, that their head-to-head was poised at 22-21 in Federer’s favour, and that their tennis qualities seem to generate a synergy on court. Put Federer’s attacking all-court fluency and tactical guile against the super-fit, super-flexible body and intellect of one of the greatest defenders, and their matches take on the look of physical chess.

But Federer gave Djokovic the nod because: “He’s played some great tennis since we’ve played.”

That great tennis was against another arch rival, Nadal, when Djokovic really turned on the form in an 80 minute win for the loss of just six games. His athleticism and tactics combined in a ruthless mix of attack and defence. Perhaps the reason Federer concluded:
“I still believe his confidence is slightly higher than mine with the amount of success he’s had this year.”

Perhaps two other factors would play their part too. Djokovic had played more than 24 hours before the final, Federer cut back on his media obligations in an attempt to get away from the O2 by 11pm.

Then there was the crowd, which had chanted and sung around the echoing O2 for half an hour after Federer’s win. Few players garner the scale of support afforded Federer—but Djokovic had handled a partisan Federer crowd many times before. If anything, it merely steeled his determination. That he had strong support of his own at the event he has dominated for the last three years surely stirred his spirits.

He began in devastating mode, earning an immediate break point. Federer not only held, but straight away had the chance to break, too, but failed to convert. Already the Federer first serve was missing the spot and with the kind of precise returning that Djokovic can produce, the result was not in doubt. The Serb broke in the third game, resisted the Swiss and his passionate support in a long sixth game, and by the time he led 5-3, had struck four aces to none by his opponent. 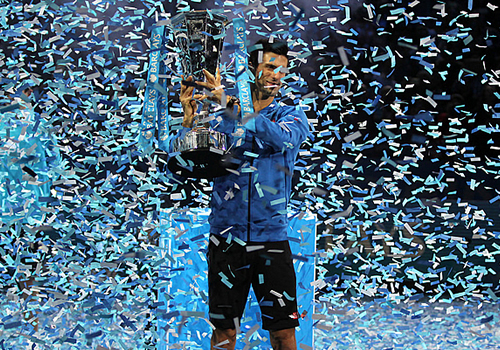 Not that Federer’s first ace helped a great deal. He lost the next three points to face two break points and, missing three straight first serves, the Serb broke for the set, 6-3.

If things looked tough for Federer, the illuminated message that ran round the court’s edge did not offer encouragement: Djokovic had won 76 our of 78 matches after winning the first set.

So few openings did Federer get that even a 30-30 scoreline sent the arena into overdrive, as did a stunning rally won with a net finish by the Swiss in the seventh game—and that just brought up 15-15. The crowd needed a breakthrough from the Swiss to take this to a decider, but it never came.

Not a break point appeared on his side, while a rash drop shot into the net and a too-slow net attack put him at 0-40. There were roars of encouragement, both from the crowd and the Swiss man himself, as he won five points in a row to hold.

But a quick love hold from Djokovic and Federer was facing defeat in the face, not helped by a sequence of second serves. After just an hour and 20 minutes, Djokovic had championship point and, with a whimper rather than a bang, Federer double faulted.

It could not have been a better finish. It has been a very long season

This, then, proved to be a vivid contrast with their match of just a few days ago. Djokovic’s defence around the baseline was extraordinary, his focus and accuracy devastating. But perhaps his serving was the most effective element of the game: he made 16 of 19 second serves. In contrast Federer made just nine from 21—as well as 31 errors to 19 winners.

Federer afterwards confessed: “It’s not much fun being on the not winning side, [though] it’s better than not playing at all like last year. This week was great again, fantastic year all round. Tried my best this week. Thought I played some great tennis, even in the finals: some points were crazy. But Novak deserved the win today. Like he has so many times this year.”

So this victory produced the perfect end to a near-perfect year for the stand-out player of the season, as Djokovic was quick to admit: “Absolutely.

“Obviously very proud for the achievements this season. It could not have been a better finish. It has been a very long season, the best of my life, and without these guys and without the support of my closest family, I wouldn’t be managing to get to where I am.

“I’m just trying to enjoy every moment on the court, cherish every moment that I play competing on such a level. You grow up dreaming to play tennis in tournaments like this and to fight for the biggest trophies in sport, so thank you all very much for making this day so special.”

Now, he plans to take some holiday with his beloved family before beginning all over again—and judging from this year, it’s hard to see him not doing just the same all over again, too.