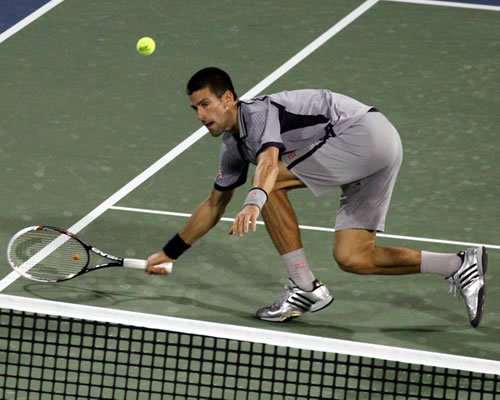 A confident world No1 is a scary No1, and the prospect of a confident Novak Djokovic is a particularly intimidating prospect.

The top man has looked the part ever since he arrived in Dubai: He wears the cloak of dominance lightly but with a glint in his eye. His words have the same quality: relaxed, carefully thought out, delivered with a calm confidence.

Take this, from his pre-tournament conference: “I consider finishing the year as No1 in the world in 2012 maybe even a bigger success than 2011.

“Right now I feel great, I learned my lesson, I understood the experience I went through, and I’m ready for new challenges.

Or this: “I’m not thinking about another streak and trying to overcome the one I had in 2011.

“It’s really hard to ask for myself something that is basically maybe impossible to make. But knowing I’ve made it, gives me that mental edge and confidence that I need to approach every tournament with self-belief.”

Of course it helped his confidence that he has won this tournament three times since 2009 and reached the semis last year: a 23-3 win-loss record.

Then add in the fact that he brought a winning record of 12 to1 against his friend and compatriot, Viktor Troicki—and that last win was their first ever match backing 2007.

Djokovic was playing in his first tournament since winning his third straight Australian Open title a month ago, but that also boded ill for his opponent: “I took some time off to recharge my batteries, to recover physically and mentally, for what’s coming up.

“I’ve been practising for a couple of weeks now and I think I’m ready for the hard court season to come.”

And ready he certainly looked. He broke the hapless Troicki twice to sweep through the first set in 21 minutes, 6-1. Hitting just 33 percent of first serves into play and scoring only six points on his own serve, it was a desperately one sided affair.

Djokovic faced a little more resistance in the second, though still broke early to take a 4-2 lead. He used his dominance to make numerous forays to the net, stretching and retrieving with extraordinary anticipation and flexibility.

“I didn’t, I think out of maybe eight serves, put one or two first serves in the whole game. But OK, it was just a little drop of concentration and it was very short.”

Indeed it was. He broke straight back and served out the match, 6-4, in a tidy one hour and seven minutes.

He afterwards affirmed his satisfaction: “Considering the fact I haven’t played an official tournament for three, four weeks…I wanted to be extra focused on the court today.

“This is one of the fastest hard courts on the tour so you need to be really committed to every point and play well.”

On both counts, he did just that, and threw down a weighty gauntlet to the rest. The silver shoes he was wearing sparkled like quicksilver—perhaps the fastest mover in tennis.

So No1 followed Nos 3 and 4 safely through in Tuesday’s magic box of tennis tricks. Could No5 follow?

Jo-Wilfried Tsonga came to Dubai on a high, having won his 10th title in Marseille just two days back, but that would contribute to the biggest upset of the day.

He played countryman Michael Llodra, who he had beaten in all six of their previous matches. Indeed Llodra had suffered similar misfortune to Marcos Baghdatis in his previous Dubai draws. His loss, in 2010 was to Tsonga, in 2011 to Djokovic and last year to Roger Federer, all in the first round.

Yet the 32-year-old is a huge talent, a left-hander designed by the old school—an outstanding serve and volley exponent, attacking to his core. Against the all-court acrobatics of Tsonga, played on a fast court, it had the makings of big entertainment—and delivered.

Tsonga went 4-2 up but a poor service game—happily attacked by Llodra—gave the break back and, with not another break point between them, they headed to a tie-break, and it was a cracker, especially from the veteran.

Llodra got the early advantage, racing to the net at every chance, and playing clean put-aways or angled touch volleys to keep Tsonga off balance for much of the time. A wonderful overhead smash took Llodra to 6-3 and another remarkable rally of net-based cat-and-mouse went his way, too. He had the first set.

It was now that the Tsonga legs began to look heavy—remembering the gruelling two-hour-10-minute three-setter it took to beat Berdych on Sunday. Llodra, looking spritely and striking the ball with near perfect touch and precision, would not let his opponent rest, broke in the third game and then broke again without facing a break point of his own. It was a famous—and fast-moving—win for the underdog, 6-2.

Tsonga confirmed what was apparent by the second set: “I was in France yesterday. I just arrived.

“It was tough to have a good reaction…I cannot play properly with Michael because he’s playing everything in two, three shots. So you don’t have time really to get a good rhythm. When you’re not so good physically, it’s tough to have very good precision and to react really fast.”

For Llodra, it poses the chance of a quarter-final place since he next faces 30-year-old wild card Dmitry Tursunov, but Tsonga’s loss really opens the way for Berdych, the only other seed in his quarter.

Similarly, Federer has seen the other seed in his section fall—so the way is clear for a tantalising repeat their US Open quarter-final, which went to Berdych. And meeting on Dubai’s fast courts could be even more of a challenge for the defending champion.