Novak Djokovic appears to be more inspired and more focused than ever, writes Marianne Bevis 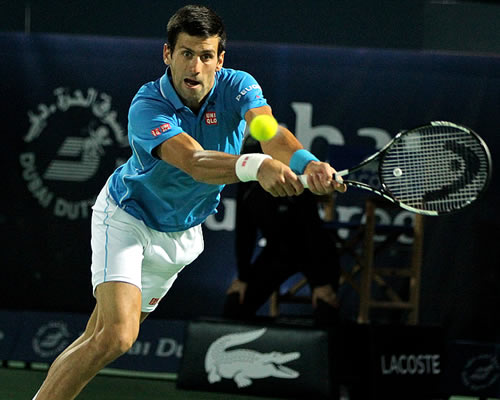 Novak Djokovic was asked, after losing the final of the Dubai Duty Free Tennis Championships last weekend, whether there was anything he could have done better, anything that may have denied Roger Federer his seventh title.

Being something of a perfectionist, the world No1’s answer was, of course, yes.

“I think in important moments maybe I could have been a little bit more aggressive, but small margins,” he said. “Nothing to really worry about. I thought it was a good week overall. I played some terrific tennis. I’m happy with the result here and moving now into Davis Cup and hard court season at Indian Wells, Miami.”

‘Nothing really to worry about’—an understatement if ever there was one.

He is, in short, already ahead of the curve, and should he come even close to matching the rest of 2014, it will be a poor lookout for those in his wake.

For after his semi exit in Dubai last year, he achieved one of the toughest double-headers in tennis, the Indian Wells and Miami Masters back to back. On clay, he made the semis of Monte Carlo, missed Madrid with injury, but bounced back to take the Rome title and reach the French Open final.

He reclaimed No1 with the biggest crown of all, Wimbledon, made the semis in New York, and from there on, won three titles from four tournaments. So he ended 2014 as No1, with more top-10 wins and more titles than anyone else—and of the seven titles, only Beijing lower than a Grand Slam or Masters.

He also ended the year as a father, yet days after Stefan’s birth, Djokovic defended his Paris title to notch up 600 match wins and his 20th Masters.

A masterful year, then, a year that ended with Djokovic looking more relaxed, more confident—serene, almost—than ever before. He said online to fans: “My favourite thing? To watch every move, every breath, and every single reaction of my boy. I should enjoy it now, because it changes very quickly.”

No surprise perhaps that after all that, and a sojourn with the IPTL in December, he did not start 2015 at 100 percent during his warm-up in Abu Dhabi nor in his ATP opener in Doha… but then came Melbourne, and Djokovic was on his way.

En route to the top of the pile, Djokovic has shown himself to be a man of many parts—though not the parts that this entertainer once produced at the drop of hat: a Sharapova here, a Federer there, along with assorted other impressions.

With each step on the road to his 28th birthday in May, every step along the path to eight Grand Slams, ‘the Djoker’ grew in stature both as player and person. Now more serious—though still not averse to a bit of dancing at the Dubai players’ party—and more focused—he is proud of his evolving relationship with Boris Becker—Djokovic is as ambitious as ever. Many boxes are ticked, but many still remain, with Roland Garros arguably the biggest.

He said after winning the ATP World Tour Finals in London: “Right now I’m at my pinnacle in the career. I’m very motivated to keep on playing on a very high level. So as long as it’s like that, I’m going to try to use these years in front of me to fight for No1 and for biggest titles in the sport. Roland Garros is and was and still will be one of the biggest goals that I have.” 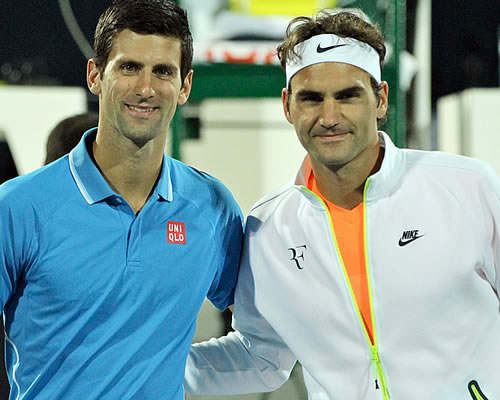 That pursuit of excellence was still uppermost ahead of Dubai, delivered in the calm, measured and articulate answers that now come easily to this bright man.

“I don’t take things for granted… [and] I am very proud of what I have achieved in my career, but as a 27-year-old, I feel like there are a few more years in my legs and my head, and hopefully as long as I have this drive and desire to play at a high level and as long as I have the commitment to make me a better player, I will continue playing.”

But a mere statement of ambition is not enough for the erudite Serb. He developed the theme: “People emphasise winning today, not just in tennis but in all sports and life in general, but for me it’s more about having this true love and passion towards the sport I play, and day in day out carrying that emotion on the court. If I am able to sustain that over a long period of time, I believe that results will come as a consequence of that pure emotion of the sport I sincerely fell in love with the first time I took the racket in my hand.

“I constantly try to find new sources of motivation. It is very important because at the end of the day it is a very mental game. So I am aware of the fact that everybody is trying to improve and that makes me also keep up with them, get my game to its highest possible level. I know nobody can be perfect, but there are always a few elements here and there that you can improve.

“Bottom line – it’s psychology that brings you where you want to be and that’s not just your mindset on the court but everything you do off the court, your philosophy of life, your way of thinking. So I try to bring that holistic approach to everything I do… every day is a learning process. So I’m grateful to have a team of people around me who are kind enough to dedicate themselves to my career.”

Skiing is still my biggest passion next to tennis

Certainly the mental and physical demands of this individual, gladiatorial sport seem to cultivate these kinds of strong, self-reliant characters, but Djokovic is a multi-faceted man able also to talk of other passions and other driving forces.

“When I was four or five, I already took a tennis racket in my hand, so nothing could match the potential tennis career, even though I played other sports. I spent a lot of time on the mountain—my father, uncle and my family were professional skiers, and my parents had a professional business in the mountain that supported the family and my tennis. And skiing is still my biggest passion next to tennis.”

So much so that he has ensured there are no clauses in his contracts that prevent him from indulging his passion. As he put it: “I have of course a responsibility not just to myself but to a lot of people working with me. But there are some things in life that you want to do. Skiing is in my blood, I was doing it before I played tennis, so I feel pretty safe on the slopes.”

He could, it seems, have pursued a skiing as a career—and his father would have been delighted—but the pragmatic Djokovic added: “I don’t think we made the wrong decision: Yes, it was a nice childhood.”

Now a father himself, he still finds inspiration from a multitude of sources. One is Becker, with whom he has now been working for over a year.

“I learn constantly something new from him… From psychological point of view mostly, because he has been in this situation, he understands what I go through, the obstacles I need to overcome in order to win big titles and be No1.

I want to learn how to play saxophone one day. I have different projects in my mind

“I think he became a father when he was 26, 27, so we talk a lot about that… how you can organise your life to get that flow moving. He tried to use the energy not as a distraction but as source of happiness and new motivation. It requires more people, better organisation, but it is possible, and I think Federer is the best example of how you can still play at that high level and be a father of four.

“I think we still want to achieve a lot, Boris and I, we feel like it’s only beginning.”

Another inspiration to this great Serb is a fellow great Serb, one who made his name in a different era and different field, but also travelled the world to find his creative outlet: Nikola Tesla.

“I feel while you are young you want to live and learn new stuff. I’m inspired most by science and Tesla, one of the biggest scientists who ever lived. He’s a pride of our country and he’s somebody I look to as an inspiration…

“I love other sports, I love music, I want to learn how to play saxophone one day. I have different projects in my mind, mostly linked to sport, because I feel like I have a responsibility to transfer this knowledge to young tennis players or athletes back in my country.”

But for all this, Djokovic could not entirely suppress the light-hearted streak that won so many fans when he burst onto the tennis stage, and still enjoys a few of the bonuses that come with fame and fortune. On photo-shoots and films, he enjoys working with creatives who attempt to capture something of his personality: “I always like to do something fun!”

For many, the prospect of a final run in hot Dubai followed by Davis Cup duties back indoors, and then the long trek to Indian Wells and Miami to try and defend two of the biggest and most demanding tournaments in the calendar sounds like anything but fun. But not for this man.

If anything, he is more inspired and more focused than ever. There are big points to defend in the coming months, but there is a Roland Garros title still to win… and the rest.